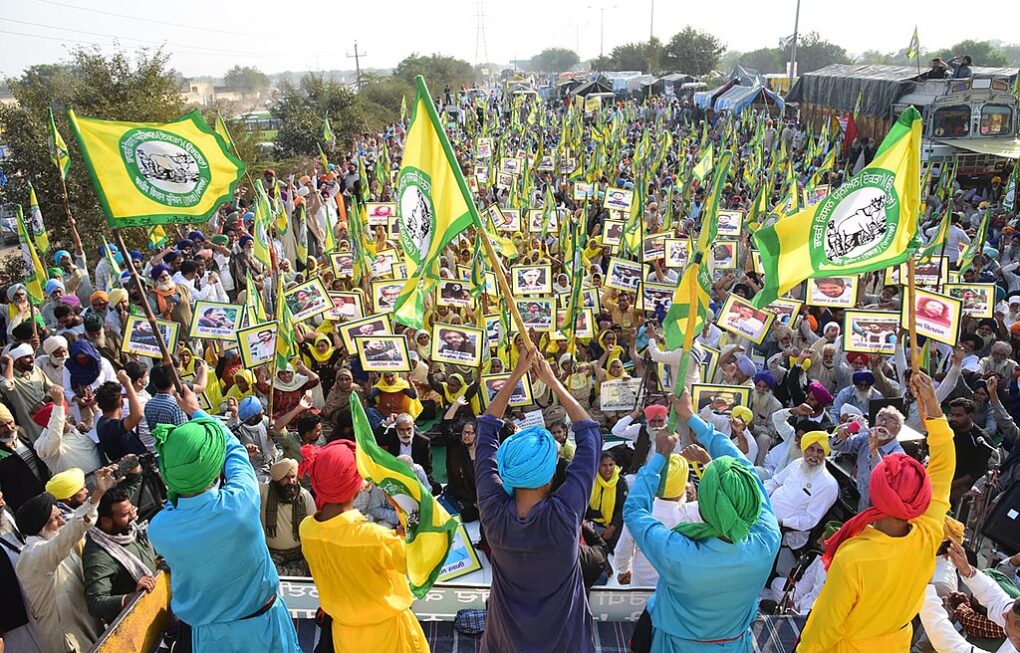 Yesterday, Prime Minister Modi surprised the world by giving in to farmers’ demands, after a bitter year-long farmers strike against the Indian government’s proposals to deregulate the farming sector and open it up to free market forces.

Last September Modi’s government passed three laws, ostensibly to modernise agriculture. But the effect would have been to leave millions of poor farmers with no protection against market forces. Many farmers have very small farms and depend upon government price guarantees, selling their produce at government controlled wholesale markets known as mandis.

Under the new laws farmers would have been allowed to sell their produce outside of the mandi system and to enter into contracts with traders. Essential Commodities laws designed to provide food security were to be amended to allow for unrestricted trade in food grains, pulses, edible oils and onions.

The farmers feared that merchants would use the new freedom to drive down prices. Modi was using market forces to modernise Indian agriculture at their expense. So began a remarkable year of struggle. There were mass rallies and demonstrations. Farmers marched on New Delhi and thousands joined a year long farmers strike in which they set up camps on motorways and major highways, effectively blockading the city.

The farmers strike was won despite great hardship. The blockades continued all last winter at the height of the Covid pandemic. Dozens of strikers have died. They have also had to take on the Indian state. Farmers have been beaten by police and in one notorious incident the son of a government minister has been arrested after he was alleged to have driven his car into a group of protesting farmers in Uttar Pradesh. Eight people including four farmers and a journalist were killed in the incident.

Uttar Pradesh is significant. The Farmers Strike began in Punjab, a majority Sikh state and soon spread to neighbouring Haryana and Uttar Pradesh. At first Modi tried to use Hindu nationalism to isolate the mainly Sikh farmers in Punjab. But farmers from Haryana and Uttar Pradesh are overwhelmingly Hindu. They too have stayed solid in their opposition to Modi. Other labour unions have shown solidarity. Rail workers joined the blockade of New Delhi by closing rail lines into the city.

In recent years India has made the headlines because of misogyny and attacks on women. In another example of how class struggle can overcome divisions, in January this year a thousand tribal women farmers from Maharashtra, members of Lok Sangharsh Morcha, (the Peoples Struggle Front) joined the farmers in New Delhi.

Modi has backed down because he could not break the strike. Elections are coming soon and, although agriculture is only about 20% of India’s economy, farmers make up over half the electorate. Modi’s attempt to divide and rule and using his control of government to force through change has backfired. It does not mark the end for the BJP. But the Farmers Strike has dented Modi’s strong man image and made it harder for him to act with impunity.

It’s not over yet

Yesterday’s climbdown by Modi, made significantly in a public broadcast on the Sikh holy day of Gurpurab that marks the birth of the first Sikh guru, Guru Nanak Dev Ji, does not mean the struggle is over. He has promised to repeal the laws when Parliament returns next month. Many of the strikers are staying out until the laws are repealed.

We have no faith in a verbal promise. Unless we see it in writing that the laws have actually been repealed, we will stay here.

They are right to be cautious. But for now let us join with them in celebrating a victory for the farmers and their trade unions against a right wing nationalist leader who sought to exploit divisions in society and came up against working class unity and solidarity.