Meet the new left, same as the old left? 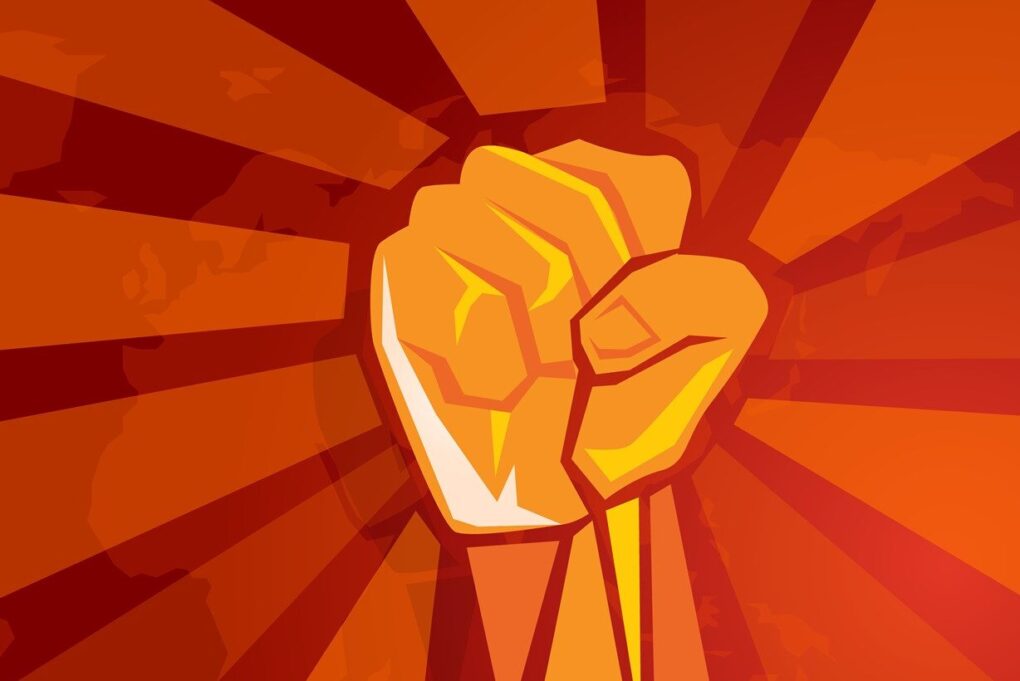 When I first became involved in politics back in the mists of time (okay, 1983) what was noticeable was that everybody on the left was interested in theory. Indeed, one theory stood out as pre-eminent: Marxism. Not that everybody was a Marxist, but arguments on the left, including the Labour Left, were conducted around the ghost of Marx. You were either a Marxist or trying to disprove him.

1989 changed everything. The fall of the Berlin Wall heralded a period wrongly described by Frances Fukuyama as “the end of history”. But, what it could rightly be called was the end of theory. Academic Marxists, already disillusioned by the failures of 1968 and reeling from the defeat of the miners’ strike in 1985, seized the moment and drifted into the vacuous melancholy of postmodernism.

Terry Eagleton remarks how their disillusion with the turn of events led to their reinvention of themselves. No longer Marxists, they sought new interests.

The point is that this shift to “the personal” has its effect on all of us. Academics, although largely simply writing in order to massage one another’s egos, have an influence on their students far beyond what most of them realise.

A generation brought up on Marxism is going to have a very different view of the World than one taught that all theories are, essentially, the same. The next generation of “radical” journalists is being taught not what to think but how to think. By the nineties a media once obsessed with student radicals, Black Panthers, striking miners, was taught to see sex and sexuality as having more revolutionary potential than class struggle. Marxism disappeared from the curriculum at the same speed it disappeared from the lexicon of many drawn to political struggle. Marxism, it seemed, had been vanquished and in its place was left a plethora of theories with an emphasis on the “I” as the focus of a new liberationist politics.

“The basic demands of identity politics assumed an atmosphere of plenty. In the seventies and eighties, that plenty had existed and women and non-whites were able to battle over how the collective pie would be divided: would white men learn to share, or would they keep hogging it? In the representational politics of the New Economy nineties, however, women as well as men, whites as well as people of colour, were now fighting their battle over a single, shrinking piece of pie – and consistently failing to ask what was happening to the rest of it.”

Whereas the battleground for the old left had been the workplace where capital met labour, the new battleground was the classroom, the media and, increasingly, social media. Of course, remnants of the old left battleground never went away completely, but, where Marxism had taught us that workers should unite to lose their chains, the new postmodern left taught us that we were increasingly the problem that needed solving. It was our sexism, racism, ableism, homophobia, transphobia, nationalism and our selfish and self-interested natures that were the problem. Where Marxism gave us a belief that class struggle (capital vs labour) could change society, the new left tell us that by looking inside ourselves we can change, well, ourselves. If that. The politics of liberation have now been replaced by the politics of desolation.

The new left have fallen for this in large part because they lack a coherent theory of social change. Indeed, often they lack any theory at all. And, you might wonder why that matters. In 1843 Marx noted that theory: “.. becomes a material force as soon as it has gripped the masses.” But the masses, we are now told, are so imbued with conservative ideology that to support them is to indulge their regressive and, anti-socialist, views. What we are left with is a movement without focus, moving from one cause to the next, often turning on one another as they do so. A movement without a theory is simply movement for movement’s sake. A theory without a movement is just words on a page. We need both to effect change.

At its best the new left sees change coming through parliament, at its worst it only sees change as a form of consciousness raising. That’s not to say that today’s left does nothing else. We write, we march, we sign petitions, we occupy, occasionally we support or even take part in strikes, we use social media. But, to what end is all this activity? What is the end-game? A parliamentary majority?

In 1918 Lenin had this to say about democracy, by which he meant parliamentary democracy. He said,

“Bourgeois democracy, although a great historical advance in comparison with medievalism, always remains, and under capitalism is bound to remain, restricted, truncated, false and hypocritical, a paradise for the rich and a snare and deception for the exploited, for the poor.”

In other words, parliamentarism may be useful as a tactic, but it cannot lead to socialism whilst the parliament itself remains ensnared in the capitalist state controlled by the capitalist class.  Politicians, caught in the glare of their own egos, talking about going to parliament to deliver socialism may well be sincere but are doomed to failure.

I’ve never really believed in parliamentary socialism thanks to Ralph Miliband’s excellent exposé of it but I have allowed myself the luxury of being excited by it. Miliband explains in forensic detail why there is no parliamentary route to socialism. Speaking of one Labour Party leader’s speech full of radical sounding rhetoric he notes,

“..what, in effect, he counterposed to this was not the vision of a socialist society, but of a renovated capitalism..dynamic, professional, entrepreneurial, numerate and efficient.”

Sound familiar? It could have been any Labour leader from the sixties onward. In fact, it was Harold Wilson in 1963.

Some will say this is because we elect the wrong leaders and all we need to do is redouble our efforts to get the right one with more radical policies. I too have looked to leaders and parties. I too have promoted co-operatives and minimum wages. I have felt desperate for a small victory to offset the overbearing feeling of loss after loss. I’ve dug in my heels, rolled up my sleeves and vowed to fight even when I knew that I was only kidding myself.

Marx once said that we can make our own history but we can’t do so in circumstances we choose. We make our history “under circumstances existing already, given and transmitted from the past. The tradition of all dead generations weighs like a nightmare on the brains of the living.” We can’t, in other words, wish away the society we live in or the history of which we are a part. The history of the Labour and trade union movement in the U.K., though I suspect this is true for most modern capitalist states, is one of entrenchment within the system, not opposition to it. It is, at its best, one of fighting for reforms which, ironically, sustain capitalism, not of uniting to change the system.

Sometimes the new left, bereft of anything to anchor them, feels like a sinking ship on a stormy sea. A ship that has plenty of crew and, despite the hole in its stern, a belief that all that is needed is a new captain. Moreover, a ship that, even if it wasn’t fatally damaged, had no idea where it was heading and even less idea how it might get there.

Most socialists will not like what I’m saying one bit. They will point, not unfairly, to the good things they do: supporting food banks, helping refugees, organising demonstrations, passing motions, working as union reps, canvassing, promoting petitions. Activity, activity, activity. So long as we are busy, it doesn’t matter whether we are any closer to socialism, because activity itself will suffice. How dare you? they will scream. Who are you to tell us that what we are doing is pointless? That what we are doing is not the very essence of socialism. So I’ll tell you. I am you. I have taken part in my fair share of pointless and ultimately futile campaigns, have signed more than a few petitions, marched goodness knows how many miles, stood on picket lines, cajoled my fellow workers to join a union, sent tweets, occupied, leafletted and fly posted. And, when people told me that it was pointless, I had the same defensive reaction you may well be having now.

But, I have always known that I was treading water. That the activities have no meaning unless, and until, they become part of a wider struggle. And, yes at times, caught up in the excitement of non-stop activity, I have taken my eyes from the prize. Getting signatures, selling papers, putting up posters, increasing followers on Twitter – all this activity which consumes us but how does it challenge capitalism at its core?

Simply repeating the same actions we have done before without any sense of how they fit into a wider struggle will not bring socialism. My point is that, unless you have a theory of how things can change, you can have no idea of how a particular action fits in to a wider struggle. That is not to say that every action has to directly relate to the transformation of society but, if you are asking people to commit their time and energy to it, it is reasonable to ask where do you think this is leading in the long term?

The philosophy of practice

The jettisoning of Marxism from the nineties onwards has created a rudderless left. We are bombarded with facts and opinions at a scale previously unimaginable, but, without an overarching theory to place them within, we have no way of discerning their importance. We know whether we like what’s being said, or whether we agree with it. But, beyond that, we cannot place this multitude of disconnected chunks of information into a wider framework. Relativism has replaced radicalism.

I am clear that, unless we get back to theory, and for me that means a return to Marxism, the new left will continue to put activity at the core of its activity, convinced of the moral goodness of those actions, but without any sense of how those actions will bring about the radical change we profess to support. Ernst Fischer in his invaluable guide to Marx notes:

“The philosophy of practice is a philosophy, i.e.not merely a collection of partial scientific findings from various spheres of study, but an attempt to understand the workings of a total process.”

Practice underpinned by theory is what Marx called ‘praxis’. Practice without theory is simply a reaction; theory without practice is just philosophy. Its practitioners, Marx noted famously, “only interpreted the World, the point is to change it.”

4 thought on “Meet the new left, same as the old left?”