Lessons from History – The Peasants’ Revolt 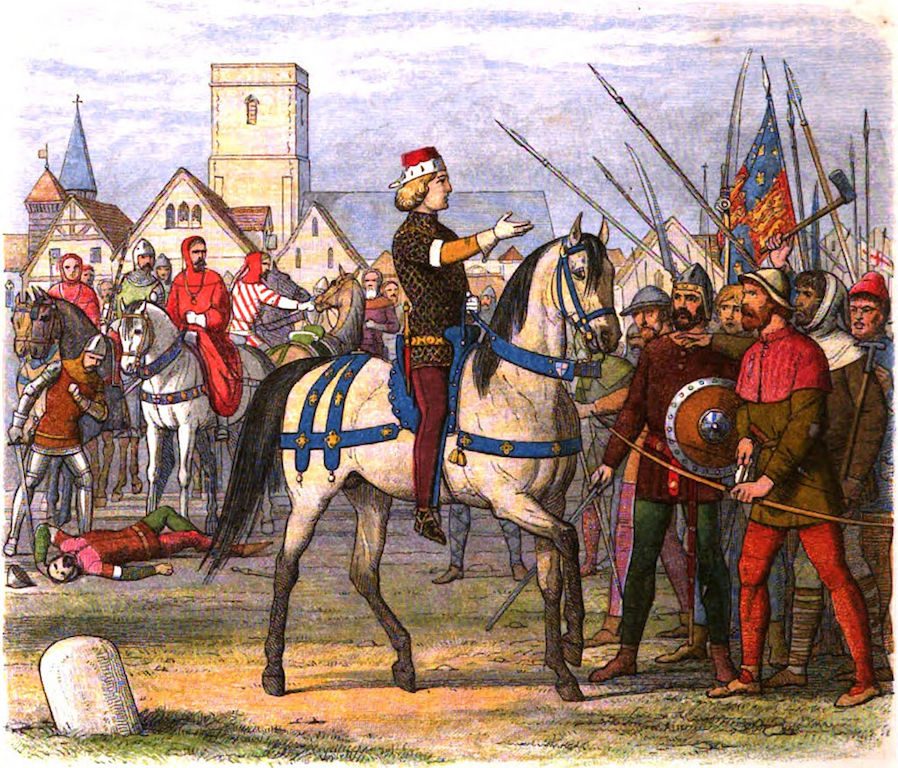 This is the first in a series of articles looking at some key rebellions in British history. It will attempt to understand the drivers for these revolts and the key factors in their failures and to see whether there are any lessons we can take from them to have a better understanding of the political world we inhabit today.

In many respects, the fact that there has not been a revolution in Britain, despite centuries of struggle and exploitation, is surprising, and there is no doubt that during specific historical periods Britain has been out of step with Europe and the rest of the world.

From 1776 to 1848, British radicals had many examples of revolution to emulate. Yet, in comparison with republican and independence movements in Europe, the Americas and the colonies, Britain never came close to an uprising which challenged or overturned the structure of government.

This does not mean, though, that there has been no resistance to tyranny, some of which has been underpinned by violence, throughout British history.

An early and particularly significant rebellion was the Peasants’ Revolt in 1381.  This was noteworthy in that it took place under the rigid and cruel system of feudalism.

Background to The Peasants’ Revolt

In the Middle Ages, most of the population lived in the countryside, and a large number could be described as peasants. They were not, though, a homogenous group. They may all have worked the land to yield food, fuel, wool and other resources, but a social hierarchy divided the peasantry. At the bottom of the structure were the serfs, who were legally tied to the land they worked. They were obliged both to grow their own food and to labour for the landowner. They could not marry without the permission of the lord. They were in effect owned by the landowner. At the upper end were the freemen who were often enterprising smallholders, renting land from the lord, or even owning land.

Other workers carried out trades, such as basket-weaving or bee-keeping. A complex web of ties formalised by a sworn oath defined the relationships between kings, lords, vassals, serfs and so on.

There is no doubt that the peasants had been emboldened by the after-effects of the Black Death between 1347 and 1351. They suffered disproportionately as a result of the pandemic, with over 40% of their number having died, and the subsequent labour shortage gave the survivors greater bargaining power. Serfs too started to realise their worth and demand their freedom.

In clear parallels with the actions of the Tory Government today, sensing the imbalance of power was shifting, albeit marginally, the Government of King Richard II decided to introduce legislation that restricted the peasants’ ability to demand higher wages. The Statute of Labourers of 1351 forced peasants to work for the same wages as before the Black Death, and landowners were given the powers to insist on labour services being performed, instead of accepting money (commutation). This meant that the landowners could profit from shortages, whilst life was made very much harder for the peasants.

By 1380 there was simmering anger among the peasants, anger that had been repressed for 30 years. The catalyst for the 1381 uprising was the imposition of the deeply unpopular Poll Tax of 1380. Not only was it the third poll tax in four years, but also it disproportionately affected the peasants, who were levied at a flat rate of 12d per adult irrespective of income. The previous poll tax, one year earlier, had demanded 4d, with a higher amount payable by the wealthier. The glaring unfairness of this tax brought to a head the economic discontent that had been growing since the middle of the century.

The final trigger for the revolt was when a royal official attempted to collect unpaid poll taxes in Essex on 30th May 1381. This ended in a violent confrontation, which rapidly spread across the south east of the country. The simmering resentment was not just restricted to the peasants. A wide spectrum of rural society, including many local artisans and village officials, rose in protest, The rebels sought a reduction in taxation, an end to serfdom and the removal of King Richard II’s senior officials and law courts.

The Essex rebellion spread quickly to other areas, including Kent and East Anglia. In Kent, the anger over their treatment had been given a focus by the sermons of the radical cleric John Ball. A peasant, known as Wat Tyler, assumed leadership of the group, and they advanced on London.

On 13th June the rebels entered London and, joined by many local townsfolk, attacked the gaols, destroyed the Savoy Palace, and set fire to law books and buildings in The Temple. They killed anyone they came across who was associated with the royal government.

The following day, 14-year-old King Richard met the rebels and agreed to most of their demands, including the abolition of serfdom. However, these concessions came too late. The rebels had entered the Tower of London, killing the Lord Chancellor and the Lord High Treasurer.

A second meeting was therefore urgently arranged at Smithfield in London on 15th June. At this conference, one of the king’s squires fell upon Wat Tyler and killed him.

Richard immediately began to re-establish order in London. Part of this process involved rescinding his previous grants to the rebels.

The revolt took longer to suppress in other areas. In East Anglia the University of Cambridge had been attacked and many royal officials were killed. Troubles extended north to York, Beverley and Scarborough, and as far west as Bridgwater in Somerset. Richard mobilised 4,000 soldiers to restore order. Most of the rebel leaders were tracked down and executed. By November, at least 1,500 rebels had been killed.

The rebels’ demands had not been radical. They had not called for an overthrow of the economic or political system but had sought a reduction in taxation, an end to serfdom, and the removal of King Richard II’s senior officials and the law courts. Given the huge inequalities and disparities of power, that, by itself, showed great courage.

The consequences of the revolt were limited, but the poll tax was abandoned, restrictions on labour wages were not strictly enforced, and peasants continued the trend of buying their freedom from serfdom and becoming independent farmers. Even these concessions were achieved only as a result of people willing to sacrifice their lives and by different groups within rural society coming together to challenge the huge imbalances of power within the feudal system. They also took place during a period of severe labour shortages. If this had not been the case, it is doubtful whether even these concessions would have been achieved.

Therefore, while the main driver for the rebellion may well have been the gross unfairness of an exorbitant poll tax being levied at the same rate across all groups, the potential for resistance had been realised some 30 years earlier when labour shortages had started to alter the balance of power between the landowner and the peasants.

So there is no doubt that this early rebellion in British history supports Marx’s theory of revolution, in that worsening conditions drove the engine of this revolt. However, it also highlights the fact that rising expectations, driven by changing economic circumstances, stoked the fires of the resistance.

It was Tocqueville, the French political philosopher and writer, who attempted to explain this apparent contradiction after observing the French Revolution in 1789.  He noted:

“It is not always by going from bad to worse that a society falls into a revolution. It happens most often that a people, which has supported without complaint, as if they were not felt, the most oppressive laws, violently throws them off as soon as their weight is lightened.

The revolution results from the realization of alternatives and possibilities.“

It is a warning heeded by many governments of all political persuasions.  The population is advised of economic troubles ahead to ensure that their expectations are managed. “Put an extra jumper on, turn the temperature down on your boiler, don’t use your oven because things are going to be very hard for the next few years” are all platitudes circulating during the current cost of living crisis.

However, evidence is showing that union members have not bought into this myth, and resistance is growing.

The Peasants’ Revolt highlights the importance of the community coming together from all walks of life for any resistance to be kick started, but it also shows the risks of disparate groups not operating collectively. More importantly it emphasises the need for clearly articulated demands that offer a real challenge to the established order.

The Peasants’ Revolt is an early example of collective action, but the outcome is also a stark warning not to underestimate the ruthlessness, duplicity, power and determination of the ruling classes to ensure that their privilege and control is maintained.