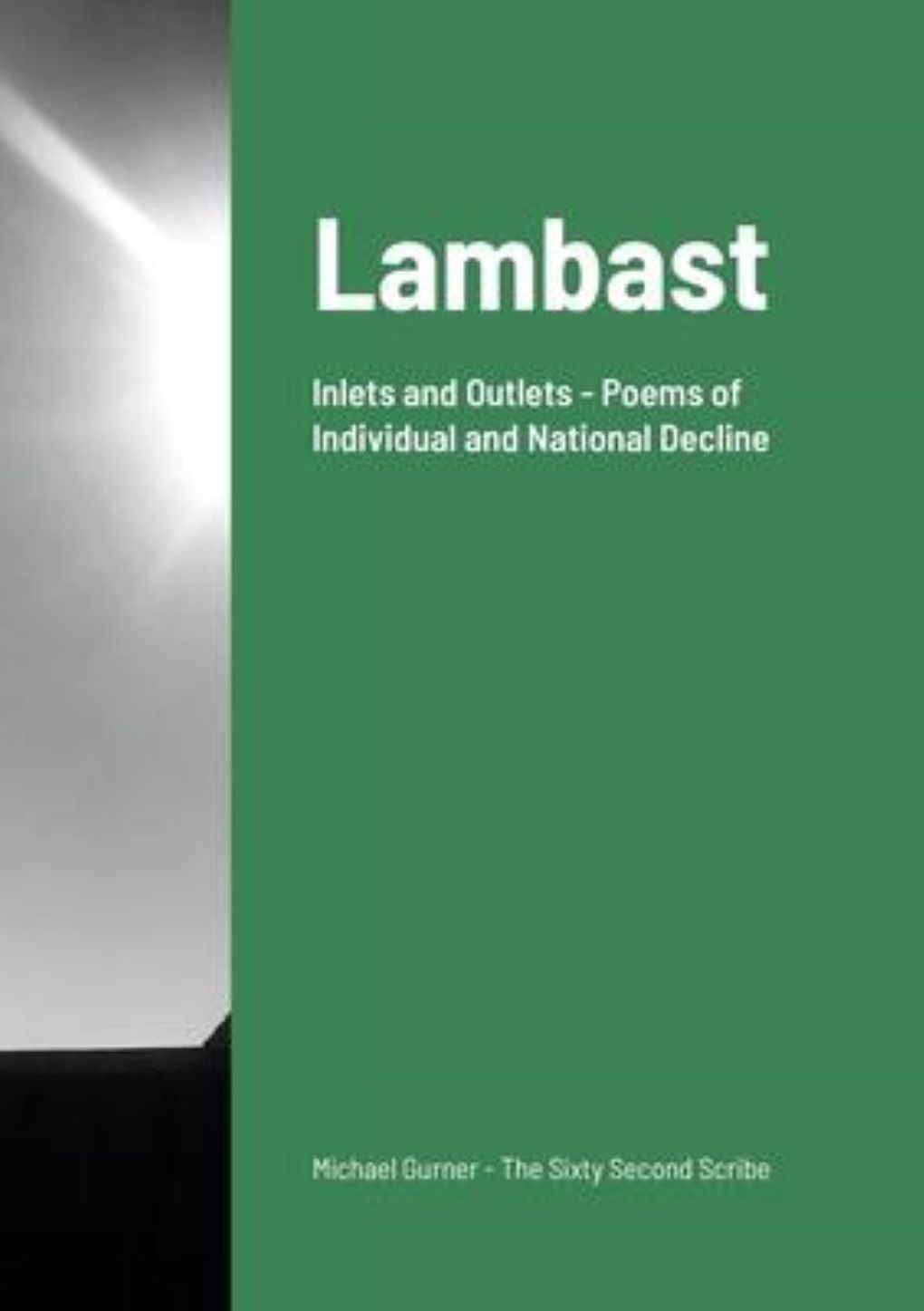 Lambast by Michael Gurner, aka The Sixty Second Scribe, is poetry for our time. Michael is best known to readers of Critical Mass for the short videos we publish of his poetry in performance. Always accurate, often acerbic, these short and witty poems are an essential commentary on current events.

The poems in Lambast all last much longer than sixty seconds and perform a different function. They are longer because they have to be. The poet is telling us something important that takes time to be explored. The conversational tone is still there. But these are conversation pieces where the poet has a story to tell and not just a point to make.

The poems are not all about politics. At least half are deeply personal.

The poems contained within are a mix of personal and political, humour and anger, frustration and relief, and chart an individual and nation in a state of dramatic decline. The individual is doing much better now – the nation probably needs more drastic help.

Michael writes in the introduction how he came late to poetry. That it was the most suitable instrument to express his anger and energy. He writes because he has to. Previous outlets such as stand up comedy and music did not suffice. Only poetry would do and Michael does it very well. And it is not all about anger. The First Kiss is a lyrical delight.

How should you read a collection of poems? This collection is in chronological order and that is how I read them. Whatever you decide this is not a collection to dip into. Each poem is a substantial piece of work that merits your full attention.

The personal poems are very well crafted, particularly the opening poem Life and Death in Our Hands about the relationship between a father and son. The cadence rises and falls. If it were to take musical form it would be a rondo. It is so complete I could not find a way to excerpt it. So here is a quote from another of the personal poems, I can’t offer you any advice, about the Kafkaesque behaviour of Lloyds Bank when Michael was trying to organise his late father’s finances. The bank staff words are in bold.

Part of the success of these poems is that things are less ‘recent and raw.’ Whether it is the death of his father, sadistic teachers at school in Look At That You Bastards or a bumptious bank clerk in I Can’t offer You Any Advice, these poems record and perform an act of closure, of coming to terms with what is over and past.

There is no such sense of closure in the more overtly political poems. They deal with Brexit lies, the vilification of Corbyn, the media complicity in the rise and rise of Johnson that gave us his criminal incompetence in the face of Covid. These poems are longer, more overtly angry and are more rough-hewn than the earlier poems, less finished because this is unfinished business.

The poet’s voice articulates more than his personal insights. These poems have power because so many of us feel this way: angry, despondent, alarmed. The success of these poems depends not on their poetic craft or artifice, but on their ability to harness our anger and mobilise us to provide the drastic help this country needs to achieve closure.

The poems in Lambast were also written to be performed and, if you are familiar with his performances, you cannot help but hear Michael’s voice, while you read. And I do recommend that you read them out loud to experience the full effect of the use of metre, rhythm and rhyme to communicate meaning. These are words that matter and they deserve to be spoken. Some should be shouted. Or chanted on demos. Or written on placards.

You can buy Lambast along with Michael’s other collections of poetry from his website. I will definitely be going back for more.

One thought on “Lambast: Words that Matter”