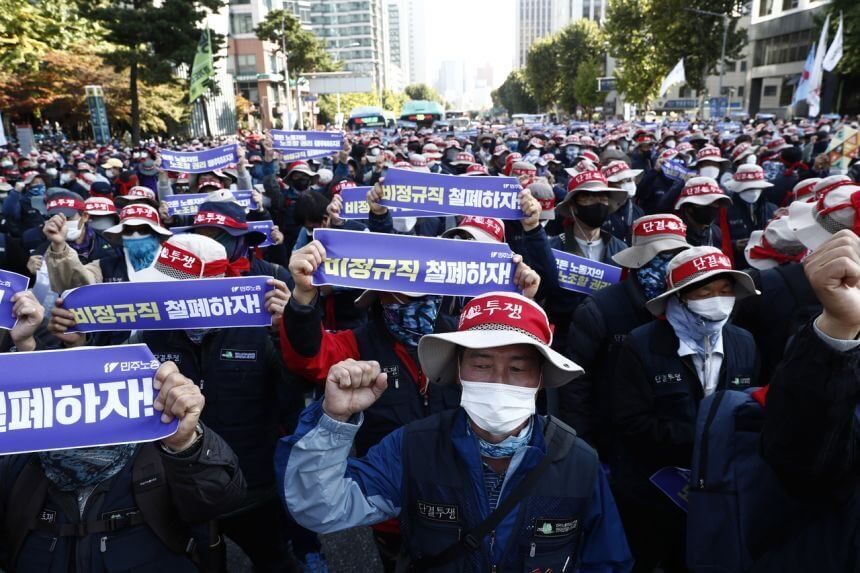 South Korea’s General Strike struggled to make the news yesterday. But a missile strike by North Korea to test their submarine based ballistic missile system in the Sea of Japan was news. Even then it had to compete with the big story about Netflix making big profits from a South Korean mini-series, Squid Game in which poor people compete to win a prize and the losers are all killed.

Yesterday at least half a million poor South Koreans chose solidarity over competition and went on general strike. They were demanding better working conditions for “irregular” workers and a rise in the minimum wage. Irregular workers are those on short term contracts and temporary workers, a bit like our own zero hours contracts. But they make up more than a third of the employees in South Korea.

The general strike was called by the South Korean Confederation of Trade Unions (KCTU) which has over 1 million members. 550,000 joined the one day general strike. They included canteen workers in schools and delivery workers like our own Deliveroo workers. 1000 of them went on strike by turning off their phone apps for the day.

80 thousand strikers joined rallies in thirteen cities across Korea including 27,000 in the capital city, Seoul. These were deemed illegal by the government as they breached Covid restrictions.

Korea is at Level Four restrictions as opposed to zero restrictions in the UK. With a population of 51 million they had 1,571 cases yesterday. We had 49,139! Even so strikers all wore masks and observed social distancing at rallies like this one.

They even had a poke at the Squid Game!

Lessons for the UK

Four things struck me about this general strike.

First, it was driven by people working in the so called ‘gig’ economy, which is supposed to mark the end of trade unionism by employing people on the margins who are supposed to be impossible to organise.

Second, workers like this are coming to dominate the Korean economy. Capitalism itself is bringing them in from the margins and making them central to the economy. Many “irregulars” are skilled workers employed in IT. Even so-called unskilled workers have been recognised as key workers during the pandemic. They are beginning to recognise their power.

Third, the pressure to drive down wages and conditions springs directly from South Korea’s dependence on the USA and the onerous terms of trade deals between the two countries. Their very own version of the special relationship, which we shall see repeated when we sign our own post Brexit deal with the USA.

Fourth and an important lesson for the world

North Korea is a dictatorship that tries to compete with the USA on its own terms as a military power. That will never work. You don’t take someone on by trying to match their greatest strength. You do it by exploiting their greatest weakness. Whether you are a dinner lady or a delivery driver or a computer programmer, you can fight oppression and exploitation using the power of organised labour. The South Korean government has more to fear from their own working class than they have from North Korea. Kim Jong-un, likewise must be hoping that the contagion of working class struggle does not spread north of the DMZ.

We applaud the courage and conviction of Korean workers and look to the day when the heart of the beast, the capitalist economies of the western world are similarly challenged. Even the smallest strike could be the spark we are waiting for.