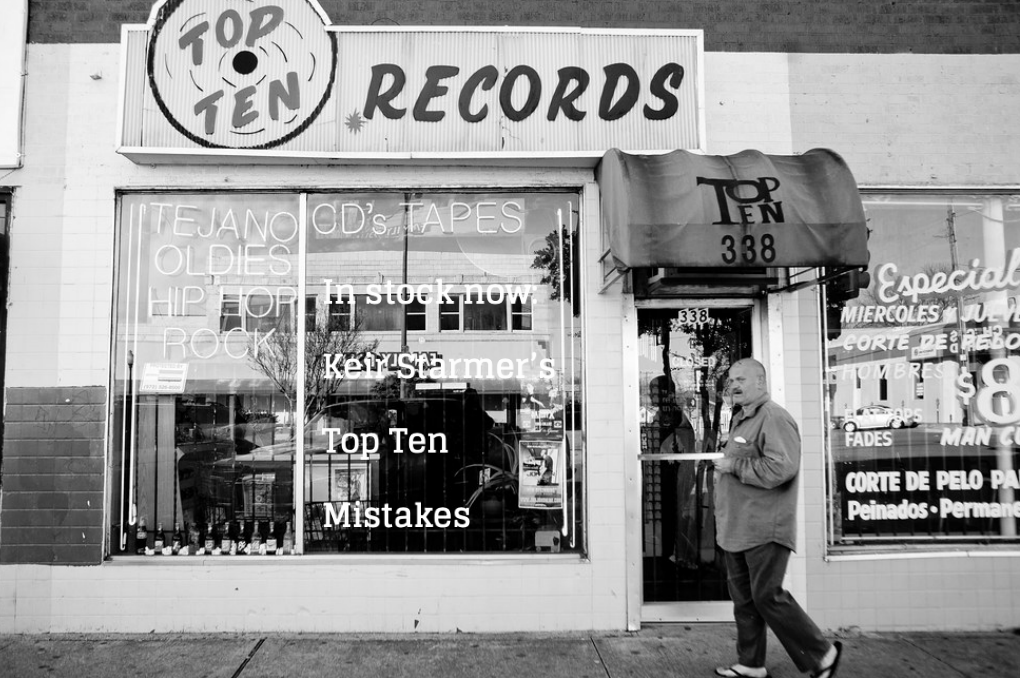 Keir Starmer, a defence lawyer who later became Director of Public Prosecutions, was first elected as a Labour MP in the safe seat of Holborn and St Pancras in 2015. He was quickly promoted to Labour’s Shadow Cabinet and in April 2020 succeeded Jeremy Corbyn as leader of the Labour Party. This meteoric rise, and his successful career in law, earned him a reputation for being a smart political operator: strategic, and eminently electable.

But, by both these measures, Starmer’s reputation is beginning to fade. After an initial surge in popularity, he slipped behind Johnson in the polls and has remained there for much of this year. In March 2021 YouGov’s ‘Best PM’ poll put Starmer 10 points behind Johnson, while in May this fell to -16. In August the question ‘Does Keir Starmer look like a PM in waiting?’ came back with a 61% negative response vs. 16% positive. Meanwhile, according to Statista, voting intentions have consistently favoured the Conservatives over a Starmer-led Labour Party – and this is confirmed by the nosedive in Labour votes in this year’s council and by-elections.

Starmer’s claim to electability is now doubtful. But what explains this decline from a politician so congenial to the establishment, presentable to the middle-classes and acceptable to the right-wing press?

Perhaps the answer lies in Starmer’s other alleged capability: strategy.

On the strategic front Keir Starmer has made a series of errors of judgement.

Let’s take a look at the top ten.

Ranked at 10th position is a strategic error which you might conceivably argue should be Equal First: the mistake, simply, of being Sir Keir.

Let’s work on the assumption that  Starmer is a good faith actor, wishing the best for Labour and hoping to see a progressive, economically redistributive socialist party replace the Tories in power. Let’s also recognise that the Tories won a resounding electoral victory in 2019 on the basis of being the party of change, an anti-establishment party with a loveable rogue at its helm, the party that listens and responds to the will of the people. In this scenario, one where populist politics is being played to the hilt, does it make sense to elect as Labour leader a staid and uncharismatic bureaucrat? Or would it have made far more sense for Starmer, in his concern for Labour’s success, to have stepped back in favour of someone less clearly embedded in the establishment and with considerably more populist presence and appeal?

If I were a rebellious Red Wall voter, I know which I’d prefer.

Given the ageing demographic of Tory voters and the unpromising economic and environmental prospects for the young, securing the youth vote should be a Labour no-brainer. Under Starmer this was not to be. Instead we see Labour retreating from the policies which engaged young people in the Corbyn era, while offering a dry, managerial approach more like to bore them into political apathy than fire their imagination. In recent weeks the Labour Party has even attacked its own youth wing, seeking to discipline Jess Barnard, the Chair of Young Labour, and discouraging Young Labour participation in the 2021 Party conference.

With their positive polling strongest among the young in previous elections, this hardly resembles a strategy likely to improve Labour’s chances at the next.

According to Survation, 2015’s General Election saw 64% of British Muslims vote for the Labour Party, as opposed to 35% voting Conservative. In 2017, the British Election Study shows over 80% of the Muslim vote going to Labour. Here again we see a strategic no-brainer for the Labour Party: ‘Keep that vote’.

However, a recent poll by Survation shows that British Muslims now rate Labour 12 points less favourably than a year ago, with the Batley and Spen by-election suggesting a significant reduction in Labour’s Muslim vote. There are reasons for this: a perception that Labour takes the Muslim vote for granted; that it treats only some forms of racism (i.e. antisemitism) as important, while being dismissive of others (and particularly of Islamophobia); and that the new Labour leadership has consistently failed to condemn Israeli government aggression against the inhabitants of Gaza and Palestine.

Allowing these perceptions to arise in an important base constituency is another strategic failure by Starmer and his team.

What was wrong with Labour’s 2019 Green New Deal? It was received with enthusiasm by those who care about the environment and gained real traction with the young. According to YouGov, in 2019 56% of the public supported the Deal’s fairly radical proposal for total decarbonisation of the UK by 2030, and 2021’s constant diet of environmental bad news will have seen this support increase.

Yet, instead of pushing this popular policy, Starmer and his team have retreated from the 2030 target and disengaged more generally from environmental issues. They resisted the Green New Deal motion at this year’s Party conference while dismissing the concerns of green Labour activists.

Has this approach gone down well with the voters? The recent Cleadon and East Boldon by-election result offers an insight:

In what should have been a Tory/Labour two-horse race the Green Party pushed Labour into third place. Neglecting the environment looks like a further strategic error.

Since becoming Labour’s leader Starmer has dramatically u-turned on Brexit. While in opposition, he campaigned strongly against Corbyn’s ‘honour the vote’ position. Now, as leader of the opposition, he’s taken the line that “We’ve left the EU – there’s no case for rejoining” (March 2021, Hartlepool). Strategically, however, it would have been better if Starmer had said ‘Yes’ to Brexit when he was saying ‘No’, and ‘No’ to Brexit now he’s saying ‘Yes’.

This is because Brexit is a proven vote winner (Referendum/EU elections/2019 General Election) and the offer of a soft Brexit did Labour little harm in the 2017 General Election. Had Labour retained that position the Red Wall seats may not have been lost in 2019.

Now, however, as we witness an economically harmful Brexit being implemented by the Tories, it would make sense for Labour to highlight the damage this is doing to the UK. But it’s too late for that. By taking the line that the issue of Brexit is over and done with, Starmer has lethally undermined Labour’s ability to criticise Johnson’s disastrous deal and its inept execution.

Any political advisor will tell you that politicians should never apologise… unless, of course, it’s one of those very political apologies that makes you and your party look good. In politics, apologies signify weakness – and there’s little voters like less.

More than this, as any Dickens reader knows, Uriah Heep levels of apologising inspire real dislike. You can’t help but wonder if the apologist is ingratiating their way into your favour in the hope of eventually gaining power over you and perhaps even doing you harm.

Starmer has ignored these psychological truths, apologising both implicitly or explicitly for what Labour was and is. His team’s repeated attacks on prominent Labour members affirms the message that Labour was broken and isn’t yet fixed – while their apologetic hand-wringing over alleged past mistakes undermines Labour’s standing in voters’ perceptions. After all, why would anyone back a Uriah Heep party when they’ve got a relentlessly self-promoting alternative on offer? Why buy a vehicle that’s ‘under repair’, when there’s a pimped-up sportster available from Wide Boy Johnson’s just down the road?

Starmer can’t help himself. He keeps on lending his support to the Tories: on getting on with Brexit, on their handling of Covid, on Ministerial Code-breaking ministers not resigning, on foreign policy, and on a range of contentious parliamentary bills waived through by abstention. But this creates a problem for any party of opposition. How can you attack the performance of a government on issues where you’ve previously expressed support? After-the-event criticism looks like mean-minded sniping from a timid Captain Hindsight… which is exactly how it’s been portrayed.

3: Swinging to the right

Attempting to out-Tory the Tories is a mugs game. No narrowly patriotic flag-waver will ever vote Labour when they’ve got the real deal on offer. No right-wing media baron will support Labour when the new populism of the Tories is such an easy sell. And who in high finance or big business will back even a right-wing Labour Party when windfalls continue to head their way from the Tory’s low taxation (on corporates and the rich) and continuing privatisation of the UK’s few remaining assets.

Yet Starmer has chosen to grab that flag, argue against corporate taxation, prioritise economic concerns over public health, reject Black Lives Matter (until, in hindsight, this looked like a mistake) and criticise the Tories for no longer being the ‘low tax party’.

None of these tactics will capture blue-blooded Conservative voters or recapture Red Wall escapologists… but they will alienate and diminish Labour’s core vote. This focus-group-centred approach is another spectacular strategic mistake.

Starmer believes in a myth. It’s the myth that to become electable Labour must first shed the Left.

Why’s this a myth?

It’s a myth because there’s no guarantee that it’s true. A policy along these lines may have contributed to Blair’s initial rise to power, but it may also have contributed to Kinnock’s two lost elections. A causal law can’t be established from just one instance, particularly when other contributory factors may have changed over time.

And, over the last twenty years, they have changed. We’ve seen a significant shift to the left by the electorate on issues such as redistributive taxation, renationalisation and foreign policy. We’ve seen a growing concern over climate change. And we’ve seen the Conservatives morph into the party of tax-and-spend.

So is Starmer’s strategy of attacking the left in Labour sound? Rather the reverse: it’s a lose-lose tactic. In attacking prominent socialists such as Corbyn and Loach, and in vigorously suspending or expelling swathes of left-wing Labour members, Labour risks losing former Labour voters to disenchantment, apathy or alternative parties, while the very public in-fighting makes Labour unattractive to swing voters and the undecided.

A better strategy from a wily right-wing Labour leader would have been to ignore the Left (won’t they vote Labour anyway?) but to appropriate their most popular policies…

If the Tories can do it, why can’t Labour?

Voters want a handle to catch hold of. That’s obvious, surely? They need to be able to say, “I’m voting for Party A, B or C because…”

Starmer and his Shadow Cabinet have failed badly on this score – so much so that it’s now become common to hear people say “I’ve no idea what Starmer stands for” or “Starmer’s got no policies” or “What’s the point of Starmer?”

This is a little unfair, because Starmer and Labour do have policies – it’s just that they’re not catchy, no one knows what they are and they’re not part of an overarching narrative which people can lock onto. Starmer’s latest outpourings on a ‘contributory society’ do little to help this. Meanwhile, the Tories are Building Back Better, Levelling Up, fighting for your freedom, patriotic, pro-business and anti-woke.

People absolutely know (or think they know) what the Tories stand for.

It’s a climactic failure of strategy from Starmer that this isn’t true of Labour.

Luke Andreski is author of Short Conversations: During the Plague (2020), Intelligent Ethics (2019) and Ethical Intelligence (2019) and a founding member of @EthicalRenewal.