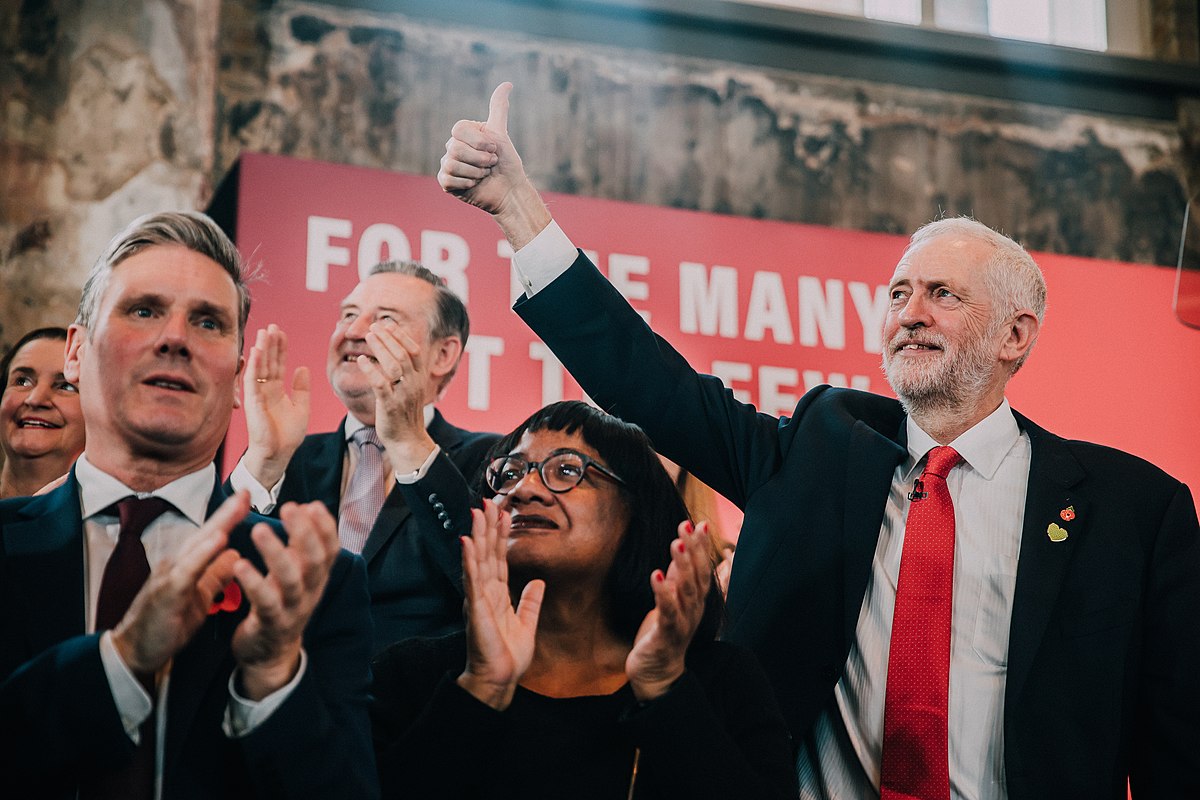 Starmer supporting the launch of the 2019 Election Manifesto

Keir Starmer delivered his speech to the Labour Party Conference yesterday knowing that his dream of victory was close to becoming a nightmare. He has struggled to make headway against Johnson and the Conservatives during the pandemic in part because initially he saw his role as supporting the government in a time of national emergency.

And people gave him credit for that. According to YouGov initial ratings were favourable. But the success of the vaccine programme has eased the pressure on the government and people now expect more from the opposition leader.

The media who continue to give Starmer a much easier ride than was ever afforded to Jeremy Corbyn are beginning to question his ability to beat the Tories. His conference preparations took place against a backdrop of speculation about future leadership challenges from Angela Rayner and Andy Burnham.

A chance to dream

So yesterday’s speech, his first to a live conference audience, has been touted as an opportunity to relaunch his leadership and outline his dream for the future under a Labour government. It had to address four factors:

Starmer has a story to tell; where he comes from and what shapes his values. There were frequent references to his family. Mum and Dad were mentioned more than anything else in his speech apart from work.

This was the most effective part of his speech. And something it is hard to imagine a Tory leader saying, especially the current one. From his dad he learned to value work, proper jobs that are skilled and well rewarded. Not the low paid jobs with no security that have grown under the Tories. From his mum he learned to value care and vocation, especially in relation to the NHS. His work as a lawyer taught him to value the fairness that comes from equality before the law and the security it provides for the victims of crime and wrongdoing.

From my dad, I understand the dignity of work. From my mum, I appreciate the nobility of care. From my work, the principle that we are all equal before the law.

And from the victims of crime, that the law is there to make us secure. Work. Care. Equality. Security.

Keir Starmer speech in full: Watch and read every word of the Labour leader’s address at party conference 2021 (inews.co.uk)

Starmer also had a lot to say about where Labour had come from. He never mentioned Corbyn but his speech was a clear repudiation of his predecessor’s legacy and an endorsement of the Blair/Brown years. He repeated the claim that 2019 was our worst election defeat since 1935 and he thanked Labour Party members and voters whose loyalty had saved the party from annihilation.

The 2019 defeat was not a sign that Corbyn had derailed Labour. Something had derailed Corbyn. The strongest candidates to date are those like Starmer who committed Labour to a second referendum on Brexit and those MPs and officials who secretly worked to undermine the Labour Party. We still await the publication of the Forde Report on this.

Starmer pretends that he did not speak out against the manifesto in 2019 due to collective responsibility. That comes after the manifesto is decided. In shadow cabinet everyone is free to voice their opinions. But, as Andrew Fisher points out, Starmer was silent.

Starmer declared in his speech on Wednesday that Labour would “never again go into an election with a manifesto that is not a serious plan for government.”

As Labour’s executive director of policy at the time, I helped write the 2019 manifesto and sat with Starmer in the meeting that signed if off when he was Shadow Brexit Secretary.

Starmer didn’t raise a single concern – unlike in 2017 when he inserted the commitment that “freedom of movement will end when we leave the European Union”.

Keir Starmer cast aside Labour’s 2019 manifesto in his conference speech yet he signed it off without protest (inews.co.uk)

Second, what motivated the loyalty of Labour voters and members? Apart from a desire to get the Tories out, was our loyalty part of a cunning plan to preserve the party so that Starmer could save it and return it to its Blairite roots? Did we campaign and vote in spite of Corbyn or because of Corbyn? This Labour Party member will be voting Labour at the next election in spite of Starmer. But I will not be campaigning and that is because of Starmer.

Yes. He is completely in favour of the Industrial Revolution because it was led by science and overseen by “honest” politicians! Keir Starmer seems ignorant of the fact that the industrial revolution marked an onslaught by the ruling class on the skilled artisans, like his dad, not in the name of innovation, but in the name of profit.

We had to strike and riot and threaten revolution before they would concede basic reforms on abolition of slavery and child labour, winning the eight hour working day, the right to join a trade union and universal suffrage. Everything that enabled Starmer to rise above his working class background came as a result of working class struggle. Yet, while he mentions work sixty-nine times, he never mentions the working class once in his speech.

Look to the future

Appealing to your past is OK up to a point. My dad was a docker. My mum was a factory hand. I am motivated by a belief in equality, justice, freedom. But so were Clem Attlee from an upper middle class background and Tony Benn, who came from the aristocracy. It’s not where you come from, but where you are going that counts.

Having celebrated his own past and disposed of ours, Starmer went on to outline his vision for the future. It reminded me of Harold Wilson and his speech about “the white hot heat of the technological revolution.” and his later “I’m Backing Britain’ campaign.

Like Starmer, in the 1960s a Labour government bemoaned the previous 13 years of wasted Tory rule. It believed that modern science and technology held the key to our future, and it also had a toolkit. “Give us the tools and let us get on with the job” was the election slogan in 1966. The tools required were a working parliamentary majority, duly delivered.

What neither Wilson then, nor Starmer now, had planned for was the unremitting hostility of the ruling class and the international business community. Wilson was made of sterner stuff than Starmer, yet even he folded under the pressure.

An earlier socialist leader was clear that science and technology were the key, with one important addition. Without workers power, technology was a tool to enslave us. But workers power plus electrification would equal socialism. That was Lenin.

For all his fine words and pious desires to change the world for the better, Keir Starmer remains wedded to the idea that his task is to persuade the bosses and bankers to embrace his ideas and our job is trust him. Yet the whole history of the Labour Party is one of impotence in the face of ruling class hostility and a subsequent betrayal of our trust.

Our rulers can change. But only under duress. I remember the tale of a mass meeting in which the trade union official patiently explained that the bosses’ intransigence meant that they were helpless.

“You can lead a horse to water but you cannot make it drink,” he pleaded.

“You can if you squeeze it by the bollocks,” came the reply.

I do not see Keir Starmer putting the squeeze on the bosses any time soon.

One thought on “Keir Starmer: dream or nightmare?”