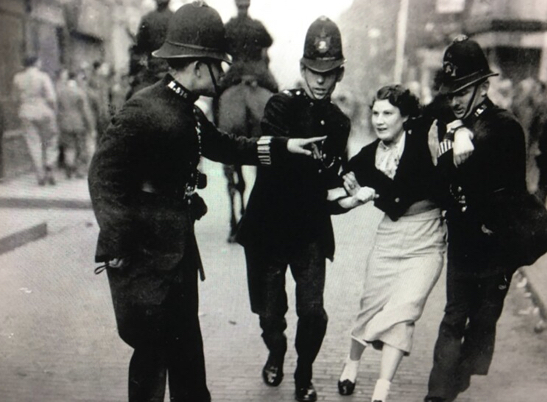 Editor’s note: Thanks to Ray Woolford and the Kath Duncan Equality and Civil Rights Network for contributing these details of Kath Duncan’s life to our series about inspirational people.

Katherine Sinclair MacColl was born in 1889 in Tarbert, Argyll, but lived for most of her youth in Kirkcaldy, Fife, which she always considered her home. She was one of the most important political activists of the last century, but her leading role in the Communist Party has, until now, ensured that much about this amazing woman has been all but erased from both Scottish and English History.

Both the British and Russian secret services would do their best to secure the assistance of the so-called ‘Red Herring’. Duncan was a communist, active in 1917, and with spies for various parties lodged in her close-knit circle until 1948. She had the ear and friendship of Sir Winston Churchill from their first meeting in 1917 until her death in 1954.  Churchill was captivated by this striking woman with bright red hair and, at first glance, he was not sure if she was a young man or woman. She claimed to be a descendant of Scottish hero Rob Roy, “who would never steal from the poor”. The friendship between the Communists and the British Prime Minister is a secret that has been kept until recently revealed.

Katherine Sinclair MacColl married fellow LGBTQ teacher and political activist Sandy Duncan in 1923 and moved from Kirkcaldy to Hackney in London. It was the General Strike of 1926 and the Invergordon Mutiny of 1931, whose leaders included her friend Fred Copeman, that would turn Duncan from a Winston-Churchill-supporting Liberal to a key and committed member of the UK Communist Party, established in 1920. She became a member of its Central Committee in 1929 and stood as a parliamentary candidate for Greenwich in 1931.

In 1930, Duncan, teaching in Battersea in South London, moved to Deptford in South East London and rapidly involved herself in The National Unemployed Workers’ Movement. She was a key organiser of the hunger marches that defined the 1930s and energetically opposed fascism. Wherever she went, crowds would gather in their hundreds and often thousands to listen to this brilliant orator and lover of amateur dramatics, who, despite her 5ft 2in height, had no trouble attracting rapt attention from her soapbox.

Organising the unemployed and the poor, she mobilised her entire community to take on slum landlords, defend market traders from being moved away, (this was part of the gentrification plans of the time), and to organise child protests against welfare reforms with children carrying banners stating, “Daddy’s on the Dole”. This is just one example from the extensive list of campaigns Duncan would take a lead in with her catchphrase “I will fight to the last ditch!” Her protests at the docks against the arms trade, specifically targeting the armaments being loaded to supply the combatants in the Second Sino-Japanese War, led to many successes, as dockers refused to load the munitions.

In June 1932, after one such protest, a large group returning to Deptford Broadway was instructed to stop singing the ‘Red Flag’ by the police. When they refused, they were attacked by mounted police in a conflict that became known as the Battle of Deptford Broadway. In the tense aftermath of this battle, Duncan was eventually arrested and charged under laws originally used against the leaders of the 14th century Peasants’ Revolt (also linked to Deptford) on a charge of being “a disturber of the peace of our Lord the King”. Her case would be the first ever fought by the National Council Of Civil Liberties (LIBERTY). Duncan vs Jones 1936 was a legal and civil rights sensation at the time. Although she lost the case, the precedent set by this trial was still being used to thwart protestors in 1999 from attending a demonstration against the Iraq War. Duncan’s case would ultimately lead to a change in the law that would allow all workers the right to protest. Duncan’s frequent arrests would lead to attempts being made in Parliament to prevent her from teaching.

The Battle of Cable Street and the march on the Gas Board against fuel poverty are just two of the many anti-fascist and social-justice struggles in which Duncan took the lead. She shared her home with many of the key activists of the time and her house was also a recruiting and vetting center for volunteers going to the Spanish Civil War, and Duncan would collect money tirelessly door-to-door to send ambulances to the fight against fascism. No activist in the last century did so much and was involved at such a high level in so many campaigns.

On 14th August 1954, she died of TB, which she had contracted in prison, back home in Scotland. In South London, thousands lined the streets to celebrate her life. When a speaker asked the crowd to whom to propose the toast, a voice piped up “The Last Queen of Scotland!” Since then she has largely been forgotten. The book, The Last Queen of Scotland, which will seek to end this injustice and restore Kath Duncan as the hugely important civil-rights activist she was and whose story is intrinsically interesting, casts a light on several key moments in 20th century British history and resonates with many of the social and political issues we face today. It also argues the case why she is the most important UK Civil Rights leader in the past 100 years, and by rights should be a household name. Kirkcaldy in Scotland is famous for Adam Smith; is it not the time it also celebrates the life of an extraordinary woman whose politics were shaped by Kirkcaldy?

kathduncanequaltyandcivilrightsnetwork.org This is our website for our Equality and Civil rights work that carries on in Kath Duncan’s name and the link to our ethical shop selling slogan driven ethical T-Shirts, Bags etc that make fabulous gifts as well as fund our cutting edge work

https://youtu.be/YO73nkU3wEk This is the YouTube clip to the song I wrote, Forbidden Love, one of the songs in my stage play Liberty, which has several original songs. It was staged as part Deptford Heritage Festival and LGBT History month 2019.