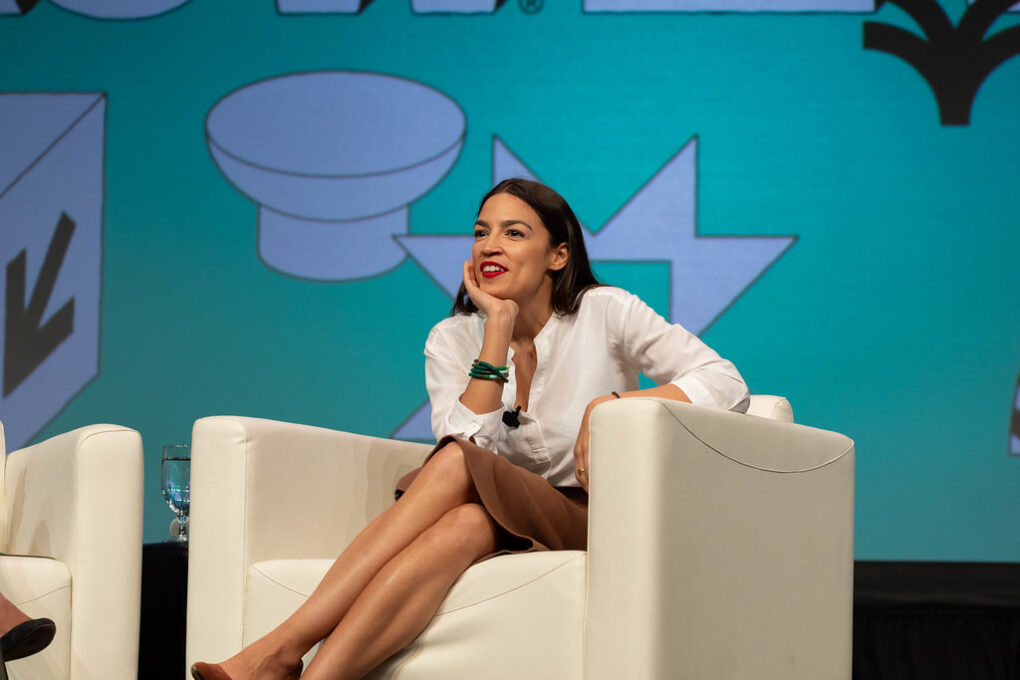 "Alexandria Ocasio-Cortez @ SXSW 2019" by nrkbeta is licensed under CC BY-SA 2.0

The writer sighs, and prepares for the mightiest of cancellations.

Let me explain the typical structure of a Greek tragedy. In its nature it appears similar to Oedipus or the Bacchae. A dissident refusing to listen to conventional orthodoxy, existing outside of the usual paradigm of modern society. A voice at the fringe, whisked into the centre by forces beyond the dissident’s control, with eventually the dissident becoming an isolated, technocratic figure, everything they were supposed to hate, with a nasty ending. A frightening concept.

Yet this is precisely what has happened to the US Congressional Representative from NY-14, Alexandria Ocasio-Cortez. Cortez began her political journey during the midterm campaign in 2018, at a time of immense political strife, in those strange early days of Trumpism. She was an outsider who beat Joe Crowley, who looked set to be the next Speaker of the House. It was a walkover, socialism had seemingly won. The general race was simple, no conservative candidate could win in NY-14. She was taken to Congress, a loud fighter against neoliberalism, US intervention and climate change. Or so it seemed.

In reality, all Cortez had done was replaced right neoliberalism with left neoliberalism. She would shoot out statements about the horrors of US interventionism, whilst opposing any attempt at socialism in Chavista Venezuela. She is a career politician, universally behind Sleepy Joe’s Zombie Presidency. She has referred to the UK as a socialist model. Tell that to those disabled people who had to go into work under Ian Duncan Smith’s punitive scheme, AOC! She is a supporter of Modern Monetary Theory, sticking within her neoliberal confines and refusing to be a true socialist, unafraid to break with the free-market orthodoxy of capitalism.

In fact, AOC is very smart in her fake revolutionary rhetoric, she knows who she appeals to, and it’s not the working class. Lenin would call AOC’s political ideology that of ‘petit bourgeois radicalism’, saying seemingly radical things which are, in practice, emptier than a Wikipedia page on creation ex nihilo. AOC is being opportunistic and dangerous, leaving her true class, the proletariat, at the mercy of Trumpist Republican law-breakers, who will say racist and offensive things to get socially conservative working class support, diverting the working class’s anger away from capitalism and towards migrants, when they are not the working class’s enemy.

Californication of the left

But this article is not about AOC, it’s about ‘Californication’, to steal a double entendre from the Red Hot Chili Peppers. So, what is political ‘Californication’? The word was originally used in 1966, describing the movement of many progressive middle class Californians into socially conservative Western states. The word became synonymous with the Red Hot Chili Peppers’ 1999 single of the same name. The song contains lyrics like ‘Pay your surgeon very well to break the spell of ageing’, a reference to Hollywood’s plastic surgery culture, in which people modify their skin using plastic to make themselves look younger. In a way, something similar has happened to the Western left in the last five or so years. Let me explain.

It’s commonly remarked that the Western left has betrayed its traditional base, the industrial working class. I can’t blame them to be fair, as only 14% of people in the UK are traditionally working class now due to de-industrialisation. The left has turned its gaze upon ‘identity politics’. Again, I’m not unhappy about this, all of these issues are important, for I support BLM’s struggle, the fight against sexism and the battle for trans liberation. All I’m saying is that we may have taken our eye off the ball surrounding trade union struggle, shooting ourselves in the foot, as the right have pounced on the traditional working class, in a populist style. When we ‘Californicated’ the left, we left a generation of older working class people at the mercy of the neoliberal national chauvinists.

AOC is not a representative of socialism. She is a representative of Californication. No matter how noble her aims, she points the finger at ‘Republicans’, attacking the superstructure instead of the base of capitalist imperialism. Republicans, and their neo-conservative counterparts in smaller rightist movements, are imperialist war-mongers. However we cannot blame Republicans for things Democrats have done in office. AOC’s fascination with seemingly revolutionary slogans like ‘Tax the Rich’ does not serve to push the nation into a state of socialist organising; it simply generates a few Twitter trends. What trade union organising and striking was to 1917 Russia, Twitter hashtags are currency to the synthetic left. AOC’s view of class politics as a historical artefact denies leftist history, denies dialectics and what little trade union action remains can be dismissed by the Californicated ‘left’, by the Trotskyites as ‘bureaucratic’ and by the Californian ‘left’ as ‘politically incorrect’.

There’s another line in this classic which grips me, when Anthony Kiedis sings ‘and Alderaan’s not far away, it’s Californication’. This is one for the Star Wars nerds like myself. In Episode IV, A New Hope, Darth Vader holds Princess Leia hostage whilst he watches her home planet of Aldeeran be massacred by the murder ray of the Death Star. Again, something similar has happened to the international left. We’ve stood idly by whilst watching our key working class comrades fall under the spell of the populist radical right, whether it be in French former Communist areas to Le Pen, former Old Labour areas to UKIP, the US ancient union towns going Red, or Lula’s devout followers looking to Bolsonaro to fascistic leadership. We may have gone on the occasional protest, or formed a new party, but it’s looking like it’s all failed. Of course we are beginning to see hope in Peru, New Zealand and the Gilets Jaunes in France, but for now we are still lost.

With all of this in mind, we still have leftist comrades ‘dreaming of Californication’, a libertarian and utterly reactionary utopia I fell out of favour with a while ago. Let’s 100% fight against fascism, racism, transphobia, sexism and homophobia, and push to liberate those oppressed people, but let’s not lose sight of the left’s historic struggle against capitalism and imperialism. So many synthetic leftists, especially in the DSA and Labour Party will argue that class struggle is finished, and our only hope is in ‘woke, green social imperialism.’ I refuse to believe this; my only hope is in socialism.

In many ways, the reality check that the Californicated ‘left’ has had in recent months through the rise of the ultra-new international ‘class-focused left’ has taught us one thing. When we abandon our core reason to be, our target audience turns away from us, and when we start navel-gazing, the capitalist class switches itself on. When workers aren’t gripped by socialism, they are gripped by imperialism. That is a risk that those who care about LGBT+ liberation, women’s rights, Black Lives Matter and trade union rights cannot stomach. I care about all of the above. However I know that when our message is lost, so are all hopes for the liberation of the oppressed.
So, as always, workers of the world unite and de-Californicate!