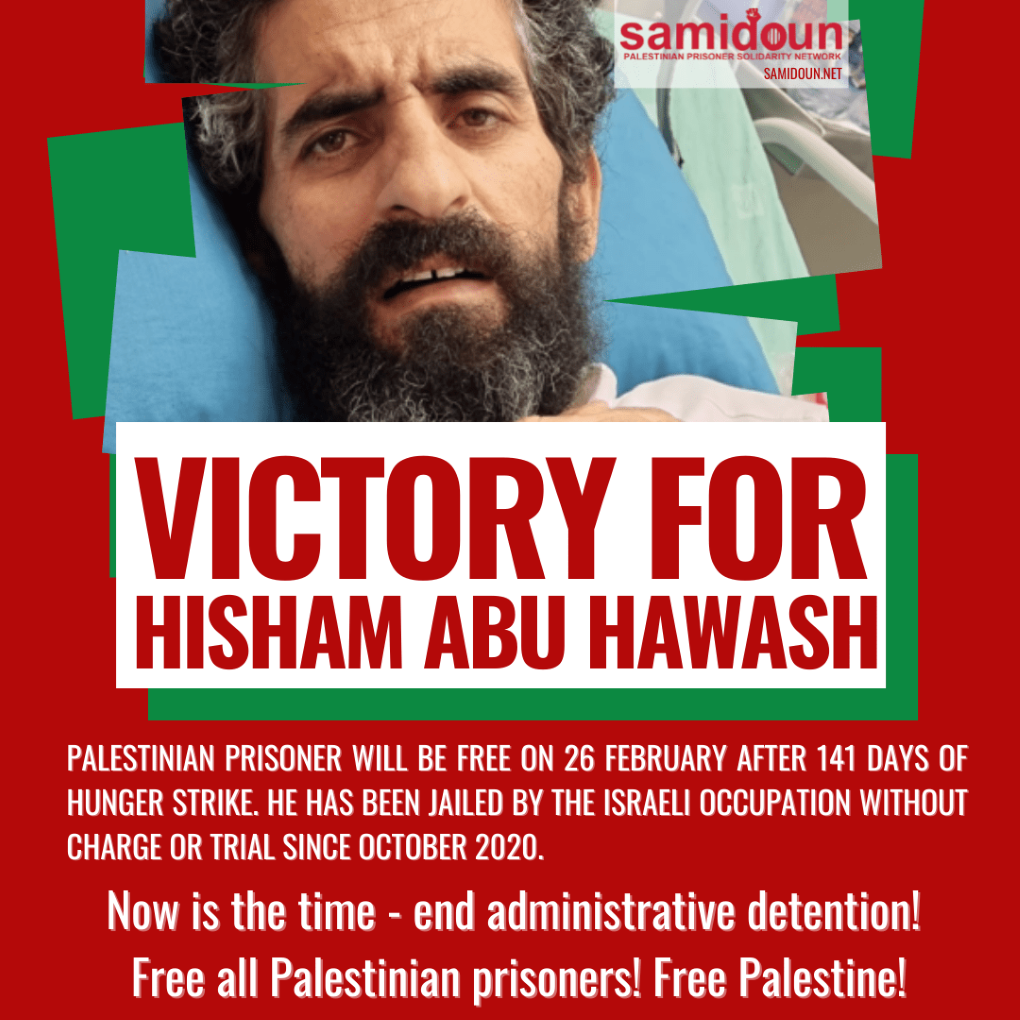 The Israeli government has agreed to release Palestinian Hisham Abu Hawash, who is married with five children, after 141 days on hunger strike in protest at his detention without trial.

Administrative detention, which was originally used by Britain when it ruled Palestine, and was taken up by apartheid South Africa in its war against the ANC, is commonly used by Israel to imprison its Palestinian opponents. This gives added impetus to the words of Desmond Tutu, who compared the anti-apartheid struggle to the struggle for Palestinian rights.

Hisham Abu Hawash has been held since he was taken from his home in Dura, south of Hebron, in October 2020, and will be released on February 26th. He has ended his hunger strike but he is still being held in an Israeli hospital as he is too weak to be moved to a Palestinian hospital on the West Bank.

His freedom came about after intense diplomatic activity involving Egypt, Israel and the Palestinian authorities, which took place against a backdrop of solidarity strikes and demonstrations in Gaza and the West Bank, including a strike in his home town of Dura.

Following a medical report prepared by Physicians for Human Rights warning that his life was in “immediate danger”, a protest was held outside the Shamir Medical Centre where Abu Hawash is still hospitalised

If Abu Hawash had been left to die, it would have been the responsibility of the Israeli government, and would have sparked further mass protests and doubtless marked the end of the official ceasefire between Israel and Hamas.

The ceasefire, brokered by Egypt and other mediators, has been fragile but has largely held since coming into effect in May, although there have been airstrikes by the IDF, supposedly in retaliation for rockets fired from Gaza.

In the US, Rep. Rashida Tlaib, the only Palestinian-American member of Congress, said the Israeli government “alone is responsible for this situation and his health and safety.”

In a tweet she added that Secretary of State Antony Blinken must “demand an end to Israel’s practice of holding Palestinians living under apartheid in detention without representation, fair trial, or even a shred of due process, in violation of international law & their human rights/liberties.”

The European Union has also shown its concern.

“The use of administrative detention without formal charge remains a longstanding concern,” said the EU in a tweet. “Detainees have the right to be informed about charges underlying any detention, must be given a fair trial within a reasonable time or be released.”

The EU stressed that a solution for Abu Hawash’s long incarceration without charge or trial “should be found immediately.”

While this foreign support undoubtedly helped, it was the courage of Abu Hawash and the support of the Palestinian people that persuaded Israel to release him. And, while Hisham Abu Hawash might be free, approximately 500 of the 4,550 Palestinian political prisoners in Israeli jails are still being held without charge or trial under administrative detention. They and their legal advisors are set to boycott the military courts that impose the detentions in protest at this shameful disregard for justice. They deserve our support.