Investigative journalism? A look back to when words truly were weapons 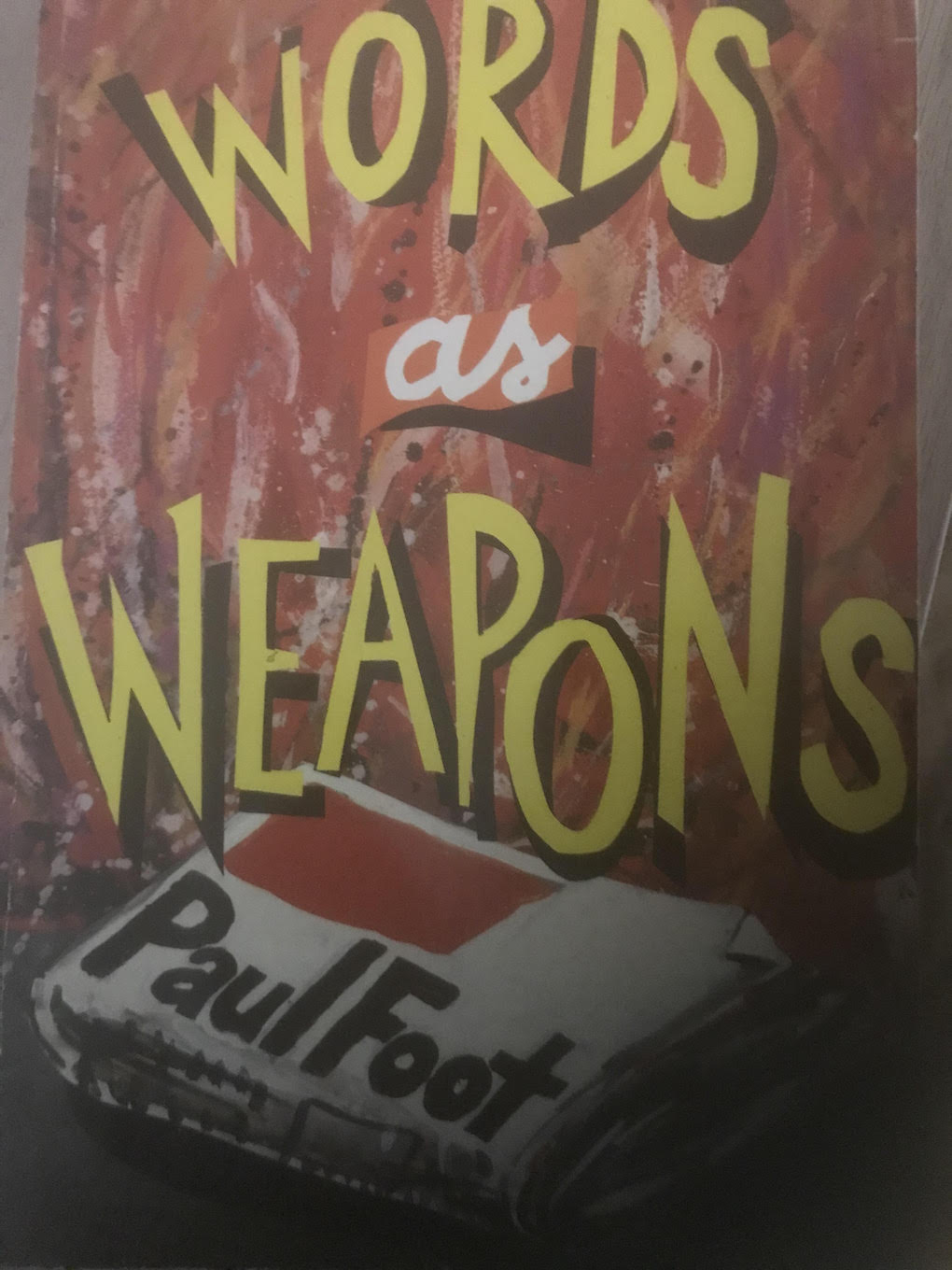 AS we today complain, rightly so, of the dearth of good journalists in the mainstream media, I find myself re-reading Paul Foot’s ‘Words as Weapons’, and, for those who may have grown up without the benefit of seeing his investigative articles as they were published in newspapers from The Sun (yes, that much-reviled paper of today) to Private Eye, the Daily Mirror and the Socialist Worker, you could make no better start at reading his journalism than to dive into this collection of his articles, mainly from the 1980s.

They give a fascinating insight into not only the times many of us lived through, but the people who helped shaped those times and, in the case of Thatcher, drove them.

For those unfamiliar with Paul Foot, a brief biography: the award-winning journalist was born in Haifa in 1937, was the son of a Lord and the nephew of Michael Foot. He was educated at public schools and it wasn’t really until, through his uncle, that Foot got a job with the Daily Record in Glasgow, which opened his eyes and with which he credits changing his perspective of society as a whole.

It was in Glasgow that Foot met workers from shipyards and elsewhere and where he read, for the first time, Karl Marx, Vladimir Lenin, Rosa Luxemburg and Leon Trotsky. It was also during this time that he joined the International Socialists and he later wrote of his time there: “Of all the many lessons I learnt in those three years in Glasgow, the one which most affected my life was a passing remark by Rosa Luxemburg. She predicted that, however strong people’s socialist commitment, as soon as they are involved even to the slightest degree in managing the system on behalf of capitalists, they will be lost to the socialist cause.”

The whole point about public ownership and planning of the means of production is that it releases capital for producing things that people need and want. He argued for more public ownership and more equality, not to abolish private possessions but to make them more widely available.

As a lover of books myself, I remember a piece he wrote for the Socialist Worker in the eighties when he wrote about the possession of books and was it not bourgeois to covet books? But, he argued, referring to John Strachey in ‘Why You Should be a Socialist’, “the whole point about public ownership and planning of the means of production is that it releases capital for producing things that people need and want. He argued for more public ownership and more equality not to abolish private possessions but to make them more widely available.” There is a short essay about this in this collection of Foot’s works, entitled ‘A Socialist Bookshelf’. But of course this applies to so much more than just books, and this message from Strachey is one socialists are still trying to get across to those who believe we want to take all their possessions from them to give them to the ‘workshy’ and ‘dole bludgers’.

Foot, as well as being a superb commentator on the times, was a great investigative journalist and he championed the case of the ‘Bridgewater Four’. The ‘Bridgewater Four’ were four men who were wrongly convicted of killing 13-year-old paperboy Carl Bridgewater in 1978, and whose convictions were finally overturned 19 years later, in 1997. Foot wrote a book on the case, ‘Murder at the Farm: Who killed Carl Bridgewater?’ which was published in 1986.

He also campaigned against the convictions of the Birmingham Six and the Guildford Four who, he firmly believed, were wrongly imprisoned (see his article in this collection, entitled ‘Left to Rot’) and who indeed were eventually released, but not after spending many years in prison. Carole Richardson, the youngest of the Guildford Four, was imprisoned at just 17 years old, and I spoke to her as part of an OU project in 1984 when she was incarcerated in HMP Styal. She was not permitted to leave the prison even to visit the dentist as other inmates did and was tormented on a daily basis, not only by officers but by fellow inmates who thought it ‘great fun’ to wrap a cabbage in a black bin liner and throw it into her room (Styal had rooms, not cells, in their ‘houses’) whilst screaming “bomb!”. That’s an aside, and I mention it not only because of the lasting impression it made on me, and the terrible miscarriage of justice and Foot’s writing of it, but also because I remember it took more than 15 years after she and the three others had had their convictions overturned to receive an apology from Tony Blair. He may not have been Prime Minister when they were exonerated, but he had been for eight years before being pressured by Irish prime minister, Bertie Ahern, and by petitions and campaigns, to issue an apology.

And whilst we’re on the subject of the centrists’ darling, Tony Blair, though not in this collection, Paul Foot did of course write about the former Prime Minister. In a scathing article for The Guardian, when it still published ‘real’ journalism, in 2003, he pointed out all the promises Blair had made and then u-turned on – from repealing anti-trade union legislation to introducing the market into the NHS via foundation hospitals and much, much more. A paragraph towards the end of the article about Blair reads:

He is, in short, for turning. In this respect he is indeed just like Margaret Thatcher: courageous and unbending when facing up to the weak, the workers and the poor; grovelling and sycophantic to the rich, the strong and the powerful.

I don’t think it’s a stretch of the imagination to believe he would be any less critical of the current LOTO.

As stated, ‘Words as Weapons’ is a collection of Foot’s works mainly from the eighties, so we have pieces on Thatcher, who he seemed to understand very well – not like, but understand – to the miners’ strike, the Royal family, Wapping, and corruption in government. For those of us who lived through those times, it’s a fascinating reminder of what occurred and how little anything has changed, and, for those who didn’t, it’s an education. These articles were written forty years ago and most could quite as easily have been written today. I find that frightening.

Paul Foot died in 2004 of a heart attack and is buried in Highgate Cemetery, near Karl Marx’s tomb.

One thought on “Investigative journalism? A look back to when words truly were weapons”