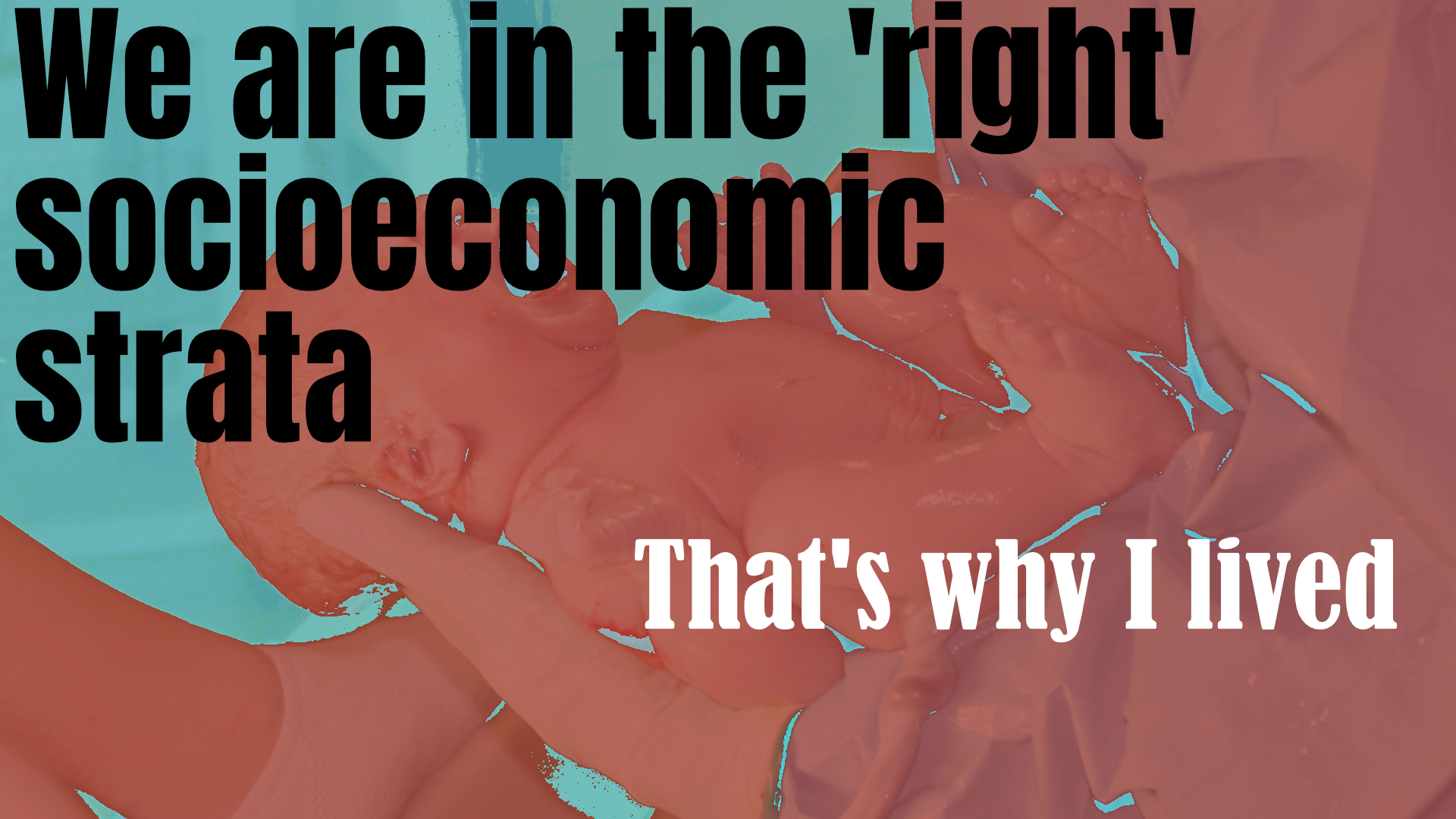 The 'right' socioeconomic strata is why I lived. Dave Elliott with Ernest F

A REPORT from a national study into the negative effects of poverty, racism and discrimination on childbirth has been published by The Lancet.

The data, compiled by the National Maternity and Perinatal Audit (NMPA), looked at more than 1 million births. The report suggests that inequality can account for a quarter of all stillbirths, a fifth of premature births, and a third of foetal growth restriction (FGR) cases.

What the Study Says

The analysis made adjustments for ethnicity, maternal smoking and body mass index (BMI). Perhaps unsurprisingly, this substantially reduced the inequalities of the mothers, suggesting these characteristics can explain considerably how socioeconomic inequality in pregnancy affects birth outcomes.

From the analysis of the data, the team estimates that 24% of stillbirths, 19% of premature births, and 31% of FGR cases were attributed to inequality.

The analysis goes on to conclude that if all women had the same risk of adverse pregnancy outcomes as women in the least deprived group in the study, the loss of these children would not have occurred.

The NHS has set a target for halving the number of stillbirths and neonatal death and reducing premature births by a quarter by 2025.

However, the focus for these reductions is the individual woman’s risk and behaviour.

Co-lead author of the report, Prof Jan van der Meulen said, “National targets to make pregnancy safer will only be achieved if there is a concerted effort by midwives, obstetricians, public health professionals and politicians to tackle the broader socioeconomic and ethnic inequalities.”

In a rather more straightforward response, Dr Edward Morris, the president of the Royal College of Obstetricians and Gynaecologists (RCOG), said of the findings, “They provide more evidence that poverty, racism and discrimination can affect women throughout their lives and ultimately lead to devastating incidences of pregnancy complications and baby loss.”

The Report MUST be Taken Seriously!

It is clear that any study using over 1 million samples, conducted by a multi-disciplinary team of the top researchers in the field and receiving positive critical responses, such as it has, is not only to be taken seriously but acted upon.

The concern we should all have is that, despite this study having credentials that are not just impressive but exactly what is required to be taken seriously, it will not get the traction needed. In fact, we should all be scared to death that it will be diminished.

The Report must be Taken Seriously?

I can almost hear you saying, “How could it not be taken seriously? It is being delivered by a crack team with more contemporary data than you can shake a stick at. How could it be possible to dismiss it?” Here’s how.

The right love their anti-intellectualism. It is very difficult to get ‘the right’ to define what they mean when they talk about ‘intellectualism’. Let me have a stab at it on their behalf:

“A deep hatred and mistrust of those with an education, state, private or self-taught, that can back up their assertions with study, data, analysis and conclusions. Particularly if the evidence eviscerates the made-up nonsense being pushed for the antagonist’s benefit.”

It may not make the OED but let’s take this as a working definition.

Therefore, anti-intellectualism is not a class-based feeling, as they are more than happy to attack ‘Oxbridge’ types who have studies that go against their narratives.

It is not politically based, as academics and subject matter experts come from the entire political spectrum.

It may have everything to do with accomplishment in a field that is peer-reviewed or at the very least open to factual scrutiny.

After all, the PM may well have been to Eton and Oxford but has no allegiance to or use for facts, their analysis and conclusion and, despite having those lies publicly revealed, sometimes by himself, it seems to make no difference to at least 39% of the voting population.

How the Report will be Dismissed

There will be right-wing attacks on ‘unelected elites’ delivering ‘wokeness’ to the nation. ‘Radical Left-wing academics’ wanting to spend more of your hard-earned cash (wink wink, as opposed to those lazy scroungers who also happen to not look like you) on ‘immigrant babies’.

The right has to do this, from their perspective.

If this study is true, what other social disasters are caused by inequality? This is a question that readers of The Mail and their ilk can NOT ask themselves.

When an organisation states on the front page of the executive summary of their work, “Our results indicate that socioeconomic and ethnic inequalities were responsible for a substantial proportion of stillbirths, preterm births, and births with FGR in England”, there is no equivocation, there is little doubt about what they are saying and they are inviting others to challenge the validity, accuracy and quality of that statement.

That one sentence, in other words, says it is a deeply corrupt, unequal and unjust society and these are the outcomes you get from it.

Whilst there have been studies and data to support this for my entire life, none has boiled it down to the emotive subject of newborn babies.

There is hope that now the 39% have it put to them in a realm they can ‘understand’, putting feelings before facts, they can be moved.

Despite the ‘anti-intellectual’ propaganda that pervades society today, seeing the cruel and arbitrary system through the eyes of a mother losing her child, when that loss was totally avoidable, may make the difference.

If not, then, if that is not the definition of a corrupt, cruel and bankrupt system, I’m sorry dear reader, I do not have the words to define it.