Indigenous people demand to be heard 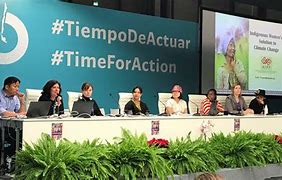 A YOUNG Māori activist spoke at the opening of the COP26 summit in Glasgow on Monday with a warning to world leaders that they needed to listen to Indigenous people throughout the world as they had many of the answers to the climate crisis.

India Logan-Riley, who was asked at the last minute to speak at the conference, linked imperialistic greed for resources and its centuries-old destruction of Indigenous cultures to the climate crisis we face today, saying the roots of the crisis originated with imperialist expansion by Western nations.

Logan-Riley stated: “Two-hundred-fifty-two years ago invading forces sent by the ancestors of this presidency arrived at my ancestors’ territories, heralding an age of violence, murder and destruction enabled by documents, like the Document of Discovery, formulated in Europe.

The global north colonial governments and corporations fudge with the future

“Land in my region was stolen by the British Crown in order to extract oil and suck the land of all its nutrients while seeking to displace people.” They went on to say the same forces were still at work in Aotearoa (New Zealand) and added, “The global north colonial governments and corporations fudge with the future”.

They spoke not only of New Zealand but of Indigenous people’s battles in other nations also. “In the US and Canada alone Indigenous resistance has stopped or delayed greenhouse gas pollution equivalent to at least one quarter of annual emissions. What we do works.”

Logan-Riley was not overstating the actions of Indigenous people in fighting for the environment. A recent report by Indigenous Environmental Network (IEN) and Oil Change International (OCI) found that an amount of greenhouse gas pollution equivalent to at least one-quarter of annual US and Canadian emissions had been stopped or delayed due to Indigenous-led resistance to 21 fossil fuel projects in the two countries over the last decade.

The report found that about 1.587 billion metric tons of annual greenhouse gas emissions have been halted. That is the equivalent pollution of approximately 345 million passenger vehicles — more than all vehicles on the road in these countries, or 400 new coal-fired power plants — more than are still operating in the United States and Canada. That is an amazing feat.

Facing threats from many quarters

Indigenous people’s voices are crying out from all over the world for leaders to listen to them. Brazil’s Indigenous peoples, who are facing increasing threats, not only from loggers and miners but from their own own climate-sceptic government, told Reuters they had brought 40 envoys to the COP26 conference in Glasgow. It is their biggest ever international delegation and a sign, if one were needed, of how serious the situation is.

“If there is no protection of indigenous territories and rights, there will also be no solution to the climate crisis, because we are part of that solution,” Sonia Guajajara, head of the Articulation of Indigenous Peoples of Brazil (ABIP), said.

First Nations delegates, ahead of the conference, had said the global community needed to prioritise the perspectives of Indigenous peoples when it comes to climate solutions.

“I think people at a global stage need to hear that we, regardless of who’s making policy or what’s going on, indigenous folks, knowledge keepers, elders are still caring for this land and we can only benefit from that,” said Rebecca Sinclair. Sinclair, who is Cree from Barren Lands First Nation in Manitoba, is a research and policy analyst with Indigenous Climate Action (ICA) based in Winnipeg.

Exclusion will be detrimental

Sinclair believes Indigenous people are being excluded from the climate conversation. “I think that’s what the global stage needs to understand is that you’re repackaging solutions that we have and excluding us from that conversation, which can be detrimental to the climate crisis already,” she said

Another delegate with ICA, James Harper, a Nehiyaw from Sturgeon Lake Cree Nation in Alberta, said before the conference: ”We will be talking about how projects basically fit within the framework of community empowerment and what development should look like with the community participating from the start”.

Tom Goldtooth, who is of Diné and Dakota ancestry and is the executive director of the Indigenous Environmental Network, said in an email ahead of COP26 that Indigenous groups will be making the point that the emission-cutting targets which have been put forward by governments are totally meaningless if dependence on coal and other fossil fuels is not abandoned.

A University of Michigan professor focusing on the environment and sustainability and a member of the White House Environmental Justice Advisory Council, Kyle Whyte, co-authored a report published last Thursday in the journal Science which found centuries of forced migration of Indigenous people by European and American settlers has left them on marginal lands and even more exposed to hazards posed by climate change.

“If countries don’t get on board with us, leaving out the people who steward a lot of the lands, it’s not just a moral issue anymore,” he added. “It will have a devastating effect on the speed at which the rest of the world will get to sustainability.”

Their voices will be heard. Let us hope leaders will be listening.

One thought on “Indigenous people demand to be heard”