How we lost the war on terror 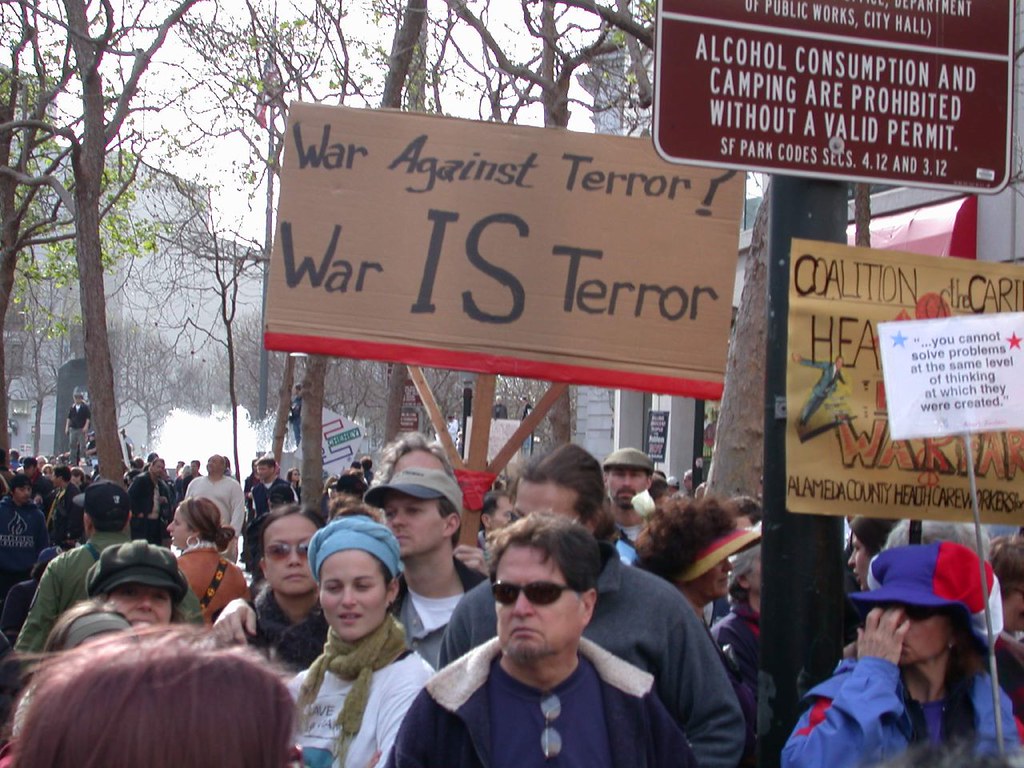 "War IS Terror" by Kevin Krejci is licensed under CC BY 2.0

I remember where I was 20 years ago on this day. I was at an economics conference in Nottingham. As I was walking towards the first session, a young American woman said, “Apparently a plane has flown into a building in New York.” To be honest, I never fully took that in, thinking, like most other people at the time that it was a tragic accident. By the time the session had finished an hour later news was emerging that it was a terrorist attack on the Twin Towers. I gave my paper which I can’t even recall the title of, didn’t spend the day glued to the TV and caught the images only later.

It was a surreal experience. The conference continued amid newspaper headlines that “World War 3” had just started. There were a number of Americans at the conference who were both in a state of absolute shock and trying desperately to arrange flights home. I was due to go on holiday to Spain that week. We hated that holiday. The holiday complex was awful, our son (4 years old at the time) was listless and everywhere we went it was against a backdrop of Armageddon.

Meanwhile George W Bush announced the war on terror and called his lapdog Tony Blair to offer British support. So, here we are 20 years on, and the events of September 11th 2001 are back in the news. It is an irony that this anniversary occurs against a backdrop of the US withdrawal from Afghanistan (for which see the excellent series of articles by Critical Mass writer Mike Stanton, here and here).

Before the attacks there were, according to the United Nations Refugee Agency, approximately 37 million refugees worldwide. Twenty years later there are approximately 79.5 million. That’s an increase of over 100%. Not all of that is a consequence of the war on terror, but given that one of its stated aims was to make the World a safer place it would appear to have failed spectacularly.

According to Our World In Data writers, Hannah Ritchie, Joe Hasell, Cameron Appel and Max Roser, an average of 21,000 people have died each year in terrorist attacks. That means approximately 420,000 deaths from terrorism since 2001. Perhaps there would have been more were it not for the indiscriminate bombing of Afghanistan and Iraq, but that figure should at the very least make us pause for thought at whether a war on terror is preventing or encouraging terror.

Brown University’s War on Terror project estimates that the total cost so far of the war on terror is a staggering $8 trillion. The human cost is 900,000 people killed in Afghanistan, Iraq, Yemen, Pakistan, Syria, Guantanamo Bay (Cuba), Djibouti, Eritrea, Ethiopia, Jordan, Kenya, Kyrgyzstan, Pakistan, Philippines, Seychelles, Sudan, Tajikistan, Turkey and Uzbekistan. That figure includes documented deaths on both sides and as Neta Crawford, a co-founder of the project and a professor of political science at Boston University, says, “The deaths we tallied are likely a vast undercount of the true toll these wars have taken on human life.”

Today we will remember the 2,977 who died on that fateful day in September 2001. They did not deserve to die and they have our absolute sympathy. But, the war which used their deaths to justify bombing and killing has not avenged their deaths. It has simply led to lots more families mourning loved ones caught up in events over which they have no control.

The world is not a better place. For the poor, the dispossessed, the hungry, nothing has changed. The only winners it seems, as we survey Afghanistan, have been the Taliban. That is why, as socialists, we continue to oppose the use of armed forces to solve the World’s problems and why we continue to wait in vain for the announcement of unlimited resources being deployed on a war on poverty and oppression.

One thought on “How we lost the war on terror”