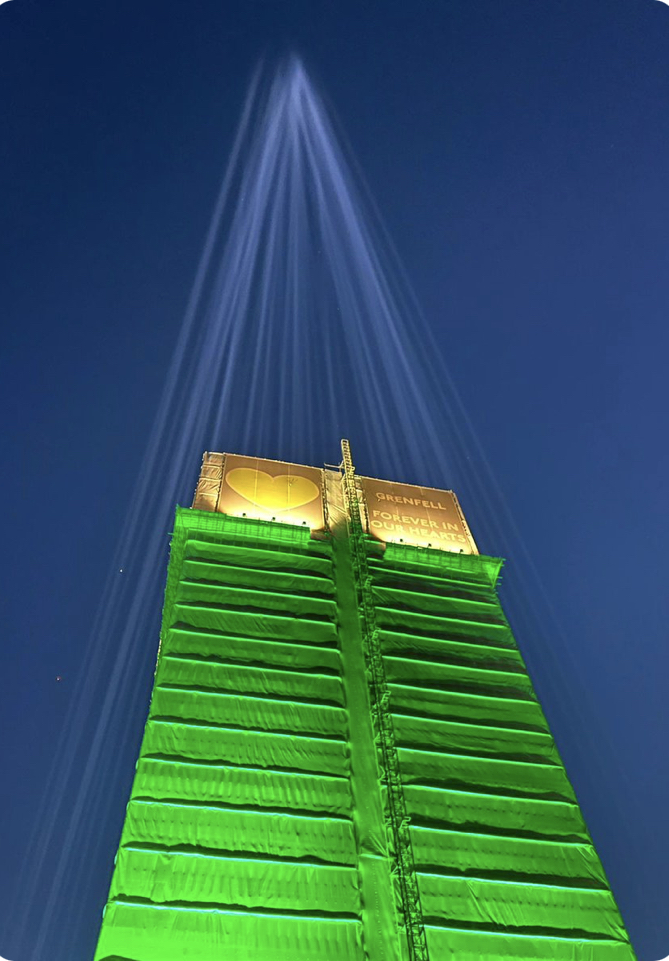 On the morning of 14th June 2017 the country awoke to the shocking news of the terrible fire that had destroyed Grenfell Tower and led to the loss of 72 lives.

On 13th June I had told my brother I would visit him in Hammersmith Hospital the next day. I realised with dread that my bus route to the hospital took me close to Grenfell, but I had promised a visit. Soon after leaving Shepherds Bush, the awful smell of burning permeated everything and ash and smoke filled the air. When Grenfell Tower came into view, there was a shocked silence on the bus as the enormity of what had happened began to sink in.

For some years I used to work close to Grenfell Tower long before the fatal cladding was added in the 2015 refurbishment. Grenfell Tower is in one of the wealthiest parts of the country. The Royal Borough of Kensington and Chelsea, home to the Beckhams and Elton John has an average income of £65,000, three times the national average. Property prices are eye watering with an overall average price of £2,938,327. Inequality is marked. Those who lived in Grenfell tended to be lower income earners and ethnic minorities. Many of the flats in this area were the cheapest accommodation in the borough and available through the council. However, this part of London seemed to me to be very mixed, with a great community spirit. High-rise tower blocks were often popular with teachers, although numerous teachers were finding it hard to find affordable accommodation in London and were leaving the city. I knew some who were offered flats in the originally more famous Trellick Tower. Many people loved the panoramic views from the tower blocks, despite the lifts breaking down and often poor maintenance, and were very happy to be able to live centrally in a thriving community at reasonable rents.

News about Grenfell Tower led to speculation as to how it came to be engulfed in flames, the action taken to try and quell the fire and the number of casualties, which continued for days. A fault in a fridge freezer on the fourth story started the fire. It spread quickly up the outside of the building and then through all the residential floors. It was eventually declared that 72 residents had died, the oldest being an 84-year-old woman and the youngest an unborn baby. The majority died in the fire but two people died later in hospital. One of the many shocking statistics is that 40% of the disabled residents in Grenfell lost their lives. Fifteen of the 37 disabled residents and 17 of the 67 children living in Grenfell Tower died in the fire.

Many were injured and 223 people managed to flee from the building.There were unbearable stories of people phoning their loved ones to say goodbye when they realised they were not going to survive, and one of the most heartbreaking and haunting reports of all told how a dad had tried to take his little 5 year old boy out when it was realised that it was not safe to stay put, as had been advised, and lost him on the stairs. He was believed to have been trampled in the smoke, and his dad was to find out later that his son had perished.

It took a very long time to relocate everyone who had lost their home and, five years later, three of those are still living in temporary homes.

A ‘failure of every institution that should have kept its residents safe’.

Who was to blame? Grenfell Tower was a block of flats in the richest borough in the UK which had only been refurbished a year before. The immediate and best known response is that faulty cladding was responsible for the rapid spread of the fire from floor to floor. When £10 million was spent on renovations in 2015, combustible material was used. If this had not been the case, the fire would have had little opportunity to spread beyond the flat where it started. However, there were other issues. A timeline of the ‘fatal refurbishments ’ was provided by Peter Apps for Inside Housing in 2020.  Soon after the fire, details of the renovations and the dangers they posed were leaked from a draft report by the Metropolitan police. The Grenfell Action group revealed numerous details from this report including the key failures which turned the structure into a ‘tinderbox’.

“The leaked report shows for the first time how far short the works fell of building regulations, strongly suggesting that the works were negligent, incompetent and badly botched at every level.”

The public enquiry to find out what happened, and to prevent anything like this from happening again, is drawing to a close and should be completed in 2023. It is a complex enquiry with numerous commercial organisations and eight public bodies so will we ever have a clear answer? Many faults came to light, from the architect and manufacturers to building inspectors and Fire Brigade advice and equipment. Those who have lost loved ones may well find no satisfaction from this complexity. One thing is for sure it would never have happened had the residents been rich, white people.

There had been a number of warnings prior to the fire that residents were uncomfortable with the safety of the building and these included a warning from the secretary of the Towers Leasehold Association, who lived on the 22nd floor, that they were ‘seriously concerned‘ about the risk of fire. This warning was given to the Tenant Management Organisation only three months before the fire. The inquiry heard about a number of other warnings, including about cladding systems, from various parts of the country.

Andy Roe, the current Commissioner of the London Fire Brigade, this week spelt out some of the issues that contributed to the fire and commented that there was a ‘failure of every institution that should have kept its residents safe’.

The three acts in this tragedy

A survivor, Ed Daffarn, who had previously predicted there would be a fire in a blog, described Grenfell as a “tragedy in three acts”. The first act was mistreatment by the landlords, who failed to address health and safety concerns raised by residents. The second act was the “sheer violence and trauma” they suffered in the fire. The final act is five years of “betrayal” by the housing department.

Many other examples of lack of concern and lack of appropriate action over the years that contributed to the loss of life have come to light. One such example is that, the year before the fire that destroyed Grenfell, 312 Conservative MPs voted against a Labour bill which required landlords to make homes “fit for human habitation”. 72 of those were themselves private landlords.

Over time more and more discrepancies and inappropriate responses have been revealed. Today, around 1 million people still live in properties which are unsafe. This is five years after Grenfell. People do not feel confident in their homes, and many put all their savings into buying their properties, took out huge mortgages and now cannot sell them. And the survivors of Grenfell and the many who have lost loved ones are still waiting for answers.

In this very bleak picture, there have been many acts of solidarity and kindness and generosity. The immediate response was almost overwhelming. Thousands of people from all over the country and from all walks of life and all faith groups began to donate money, supplies and time to help the victims of the fire. The sense of solidarity and community spirit has grown from strength to strength, and people from outside the immediate area continue to lend their support. Many people wear ‘green for Grenfell’ year after year. The colour green has come to represent the Grenfell Tower tragedy since a number of buildings across the UK were lit up in green at 54 minutes past midnight on 14th June on the first anniversary of the fire.

This summary of the situation appeared in a report by Left Futures at the time, but it is shocking is that so much is still true today five years after the tragedy.

“To sum up: in the richest borough in the country, poor people died in their homes, despite repeatedly warning the authorities of safety concerns and possibly as a direct result of actions taken by KCTMO (Kensington and Chelsea Tenant Management Organisation). The government knew what should be done to avert such tragedies and did nothing. Cuts stopped the tragedy from being prevented through legal action or mitigated by the fire service. Those responsible remain in power. But the people are fighting back.”