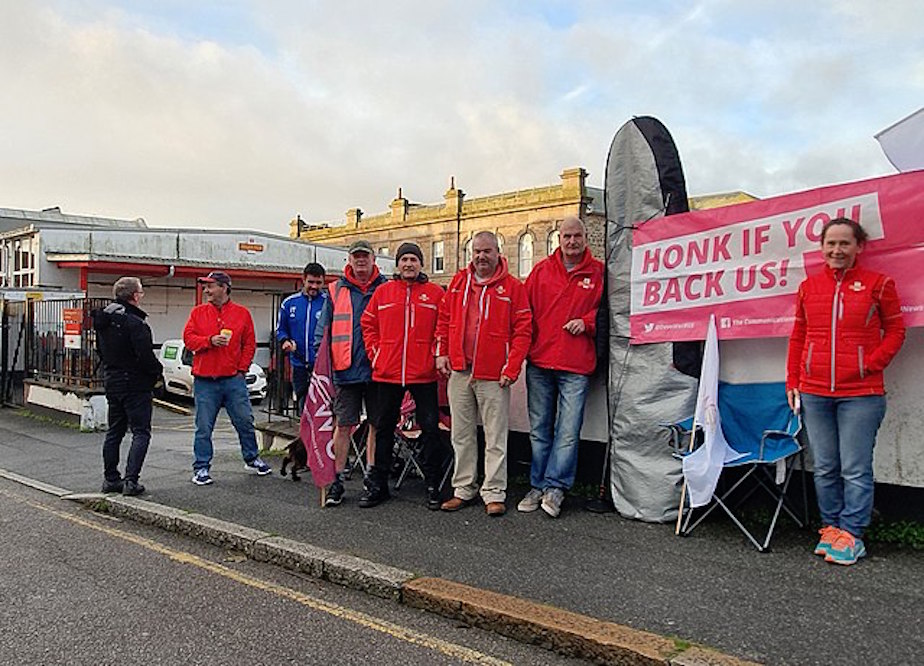 Picket line outside Penzance sorting office during CWU industrial action in October of this year. They are still going strong.

THE Tory government is provoking strikes in the public sector by refusing to negotiate with health workers over pay and sabotaging a settlement on the railways by insisting on unacceptable changes to terms and conditions such as the imposition of driver-only operated trains.

Last week it was the railways. As Mick Lynch said

RMT has now secured deals with the devolved governments in both Wales and Scotland. The Union has also secured pay deals on TfL and several areas where metro mayors are in charge of the railway franchise including companies like Merseyrail. The Westminster government is the odd one out.

The government is directing Network Rail, a supposedly ‘arms length’ public body of the Department for Transport to take a hard line and encouraging the privately owned rail operators to follow suit with a £300 million indemnity. That is taxpayers money gifted to the bosses to take on the unions.

In 1989 Thatcher took on the ambulance workers and, despite a smear campaign that planted fake news about heartless strikers refusing to respond to emergency calls, public support helped them to win 16.9% over two years. Taking on health workers when the memory of Covid is so strong is a high-risk strategy. So why is Sunak doing it?

The Tories have been panicked by the depth of anger and the strength of militancy shown by the unions. They are extending the strikes in order to turn the public against the unions and make it easier for them to introduce new restrictions on strikes including minimum service level agreements.

Union leaders have been quick to point out some of the proposed service levels exceed what is now possible when they are not on strike! They expose the need for fully funded public services that pay these key workers a real living wage and reward their professionalism.

Public support is still strong, which is reflected by some elements of the media questioning the government’s stance. Predictably, while criticising the government’s stance, Starmer’s Labour Party has refused to commit to meeting the nurses’ demands, refuses to endorse strike action and has even suggested it supports the use of troops as strike breakers. The government is running scared. But so is the opposition! It is time to build a genuine socialist opposition on the streets and on the picket lines.