G7 and the War in Ukraine 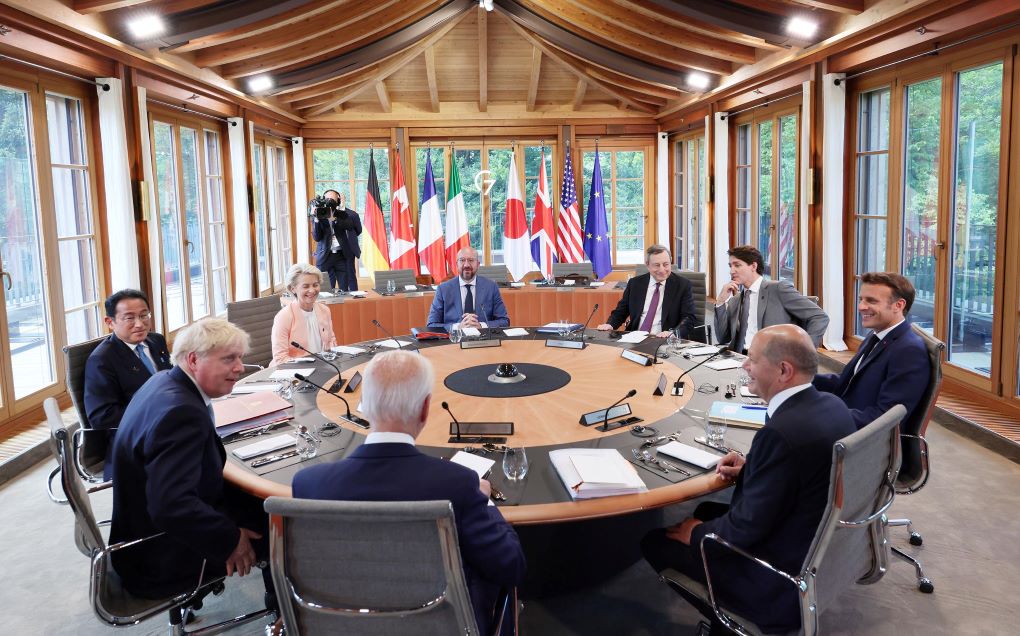 The G7 summit, taking place at Schloss Elmau in the Bavarian Alps, has been dominated by the war in Ukraine. President Zelenskyy addressed the leaders of Canada, France, Germany, Italy, Japan, the UK and the USA and the EU by video link. It was a private session, but it is no secret that Zelenskyy has been asking for more advanced weaponry, both to counter growing numbers of missile strikes on civilian targets and to strengthen his forces in the bitter fighting for control in Donbas.

Whether or not Putin ever believed his own propaganda that this was a special operation to overthrow a Nazi regime and liberate Ukraine, it soon became clear this was a war of aggression which was fiercely resisted by the Ukrainian people. And this resistance has led to reprisals against the population in conquered areas, with all the usual atrocities of war: looting, civilian massacres, rape and torture. Recent missile strikes on civilian targets in Kyiv are one more example of Putin punishing Ukrainian resistance.

Alongside the war crimes in Ukraine, Putin is cynically using the blockade in the Black Sea to threaten famine in some of the poorest countries in the world which rely on Ukrainian grain imports.

Whether or not NATO provoked the war by its eastern expansion, it failed to prepare for Putin’s invasion and has since been playing catch-up. But the West’s support for Ukraine has always been qualified by the knowledge that Russia is still a nuclear power. So, it is yes to military aid but no to military intervention, yes to future EU membership but no to NATO membership.

Self-interest also comes into it. There have been conciliatory remarks from some EU nations who are reliant on Russian energy supplies, but the UK and the USA have become increasingly belligerent and, while expressing their concern for the suffering in Ukraine, are quite willing to extend that suffering in a prolonged campaign that is becoming a proxy war by NATO against Russia. They encourage Zelenskyy to believe he can win, instead of backing diplomatic efforts to achieve a ceasefire.

Similarly, their new-found concern for world hunger comes with sanctions to stop Russian grain being sold and attempts to stop stolen grain from Ukraine being sold to ease the threat of famine, lest it benefits the Russian economy. There are two theatres of war, in Ukraine and in Africa, where starving children are collateral damage in NATO’s undeclared war on Russia.

The war also gives them a get-out-of-jail-free card for the cost-of-living crisis in the West. Johnson makes speeches about sacrifice to support Ukraine as market forces and naked profiteering go unchecked to drive up the price of food, fuel and energy. But the gas and the oil continue to flow from Russia. Profits and dividends and bankers’ bonuses are not being sacrificed. We are.

All the G7 leaders are happy to bask in Zelenskyy’s reflected glory to divert attention from their own failures and to blame Russia for all our problems. Sanctions are being stepped up which will cripple Russia’s domestic economy and harm its citizens in the hope this will weaken Putin’s war effort and even drive him from office. Russia’s economy is set to shrink by 15% next year.

The G7 represent 58 per cent of the world’s net wealth and more than 46 per cent of the global gross domestic product (GDP). Our leaders talk about their strength and power when it is turned on a foreign enemy. But the real enemy is at home – poverty and hunger in some of the richest countries in the world. They feign helplessness because there is a war on. They are using the war to distract attention from their own failures in domestic policy. We know there is a war on. It’s the class war and more and more groups of workers are being drawn into the fight.