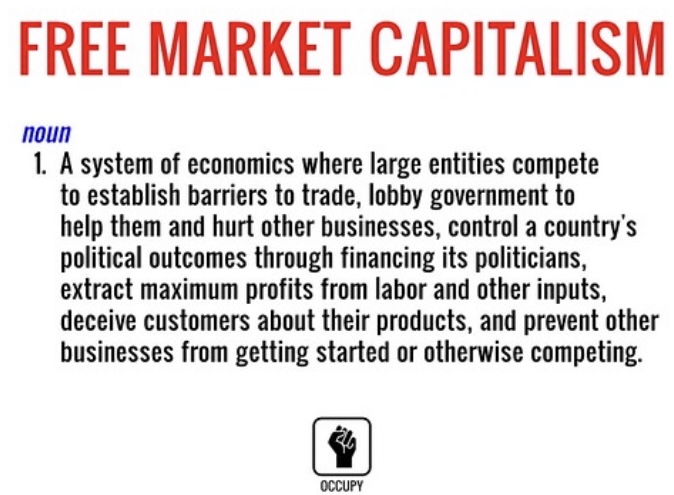 This is the first in a series of posts that aim to explode the common myths of neoliberal ‘free’ market propaganda. Something you can read in the Daily Mail, Times, Telegraph, Sun, and Daily Express any day of the week. If you want to find out more about the mythology of the ‘free’ market right, I recommend the excellent ‘23 Things They Don’t Tell You About Capitalism’ by the economist Ha-Joon Chang. It’s essential reading to understand how modern capitalism portrays itself as dynamic and risk-taking when it is more often conservative and protectionist.

In the UK, in the past decade or so, and particularly since the big crash of 2008, there have been increasing attacks on the public sector. Neoliberal ‘free’ market fanatics have been working hard to paint the public sector as a drain on our national resources, something which is an unaffordable luxury populated by workers on fat cat salaries and pensions. We are routinely told that only the private sector can create wealth. This is nonsense and is demonstrably false. But why is it happening?

The reason is that corporations want to get their hands on public sector assets at knockdown prices and see providing public services as very easy money. This is because public services are monopolies.  For example, your local council has a waste collection (and disposal) contract with one company. You don’t see refuse wagons tearing down your street competing to pick up your bins, do you? It’s a monopoly and therefore very easy money compared to the supposed cut-throat world of capitalism, where businesses are supposed to be competing for survival. So, the public sector represents rich and easy pickings for ‘free’ market ‘entrepreneurs’.

Rubbishing the public sector is all about getting the public onside to accept the asset stripping of privatisation, which is based on sacking workers, reducing the conditions for those who remain, and dumping the costs of unemployment and hardship onto wider society. This is the time-honoured ‘free’ market trick of privatising the profits and nationalising the losses, in other words – a racket.

Neoliberal ‘free’ market fanatics don’t really understand the concept of wealth anyway. They think in terms of profit, bags of cash, and personal gain. But real wealth is not about money, not about bags of cash, it’s about much more than that, it’s about meeting human needs and wellbeing. The public sector creates wealth in many ways, through health, education, and welfare, through infrastructure, and creating jobs both in the public and private sector. Without it, we would all be a lot worse off. The NHS is the single greatest engine of wealth creation in the UK and plays a crucial role in our economy. In order to have a healthy economy, we need a healthy population.

If we allow our public sector to be privatised, it will become hollowed out. Do you really want the education of your children to be reduced to the level of a transaction at Tesco or Barclays?  If you privatise these crucial services, you reduce them to the level of a mere commodity, a financial transaction, and you become merely a customer, rather than a stakeholder, an owner. But you can never expect the ‘free’ market fanatics to understand that level of subtlety, for them humanity is reduced to mere units of consumption. That is your function, to provide them with profits. Their ideology is ultimately anti-human, like George Orwell’s Room 101, and the boot stamping on the human face –  forever.

One thought on “FreeMarket Myths No.1: The Public Sector Doesn’t Create Wealth”