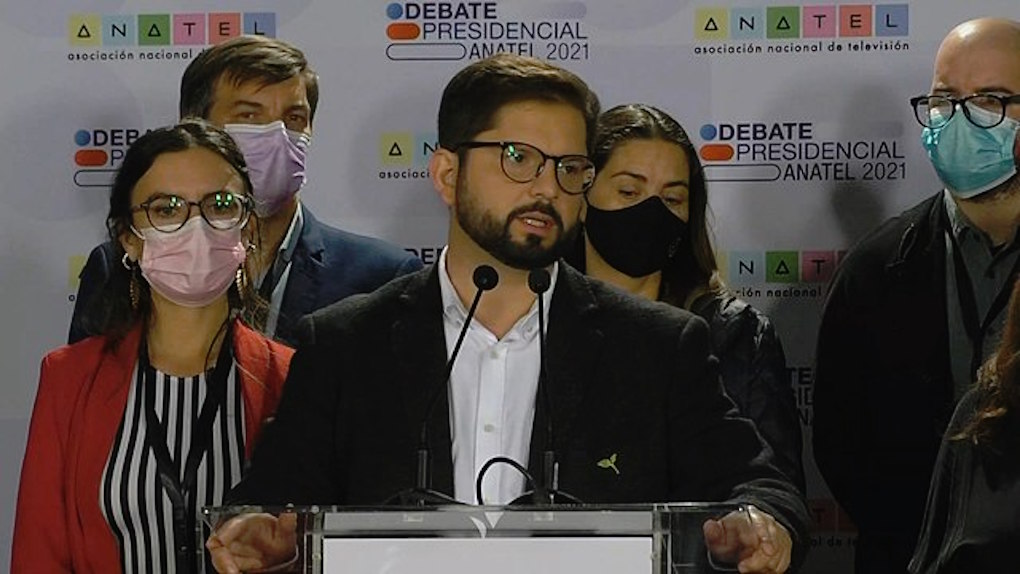 THE news late on Sunday that Gabriel Boric had won the Chilean election and would be the next president brought cheer to millions of socialists hearts. While we in the UK had our hopes destroyed this month two years ago, we can at least feel optimistic again as the former student activist, only 35 years old, is set to take office.

Boric ran on a platform of firmly denouncing neoliberalism and promising to raise taxes on the ‘super rich’ in order to expand social services, fight inequality and boost protection of the environment.

He first rose to prominence as a student at the University of Chile in Santiago where he led the Federation of Students, also leading protests in 2011 which demanded improved and cheaper education. By 2014, and still in his twenties, he had joined the national Congress as a lower-house legislator, representing Chile’s vast and sparsely populated southernmost region of Magallanes.

This election was a tight one with Boric’s rival, Jose Antonio Kast, winning the first round by two points but failing to secure a majority, which led to the second round of voting. And this is where Boric brought his organising experience to bear as he encouraged voters in other areas, who had not turned out initially, to get out and vote. Thus he attracted voters in rural areas; for example, in the northern region of Antofagasta, where he finished third in the first round of voting, he beat Kast by almost 20 points on Sunday.

An additional 1.2 million Chileans cast ballots compared with the first round, raising turnout to nearly 56 percent, the highest since voting stopped being mandatory in 2012.

The comment by Valeria Vasquez, a Mexico City-based analyst with the consultancy firm Control Risks, was very interesting re the left regaining power in many countries in Latin America, not least because it recognises the power of social media.

“This new millennial left has the base of the old forces,” she told Al Jazeera, in a reference to left-wing movements such as trade unions and socialist political parties. “They are starting to build around that historical base, using other mechanisms, governance via Twitter, for example, to help to gain power.”

Just last month, in Honduras, we saw Xiomara Castro, the country’s first female president, win the election with a promise to “pull Honduras out of the abyss” of a “narco-dictatorship and corruption”. Castro’s husband, if you remember, former Honduran President Manuel Zelaya, was deposed in a US-supported coup in 2009 during the tail end of the last wave – a period called the ‘pink tide’ – of socialist governments in Latin America a decade ago.

This year also saw Pedro Castillo win the presidency in Peru. The former rural teacher pledged to better share the country’s vast mineral wealth and take more royalties from mining companies he accused of ‘plundering’ the country, although his popularity has waned a little with allegations of corruption.

And Brazil’s next election, set for October 2022, is likely to pit the far-right Jair Bolsonaro against former left-wing President Luiz Inacio Lula da Silva in a contest which will offer voters in Latin America’s most populous nation a clear-cut choice between left and right.

It’s sad, at least to me, a supporter of the Frente Sandinista de Liberación Nacional in Nicaragua, and a member of the Nicaraguan Solidarity Campaign for many decades, that we can no longer count Daniel Ortega as one of the left. I met him in Managua in the early eighties, just before he became president and was impressed and in awe at this man who had been imprisoned and had fought since a young student for his country. A man who wanted only for his fellow citizens to be educated and healthy. Of course he hasn’t been in office all this time – after his initial election win in 1984 he was out of office from 1990 until 2006 – but it’s disheartening to see how a once great figurehead for the left has descended into a tyrant cracking down on civil liberties and oppressing Nicaraguan citizens.

However, with Gabriel Boric’s and Xiomara Castro’s wins we can again take heart and hope this is the beginning of a new ‘pink tide’ – if only it would reach as far as the UK. We may have lost in 2019 but that is no reason to believe we will never win.