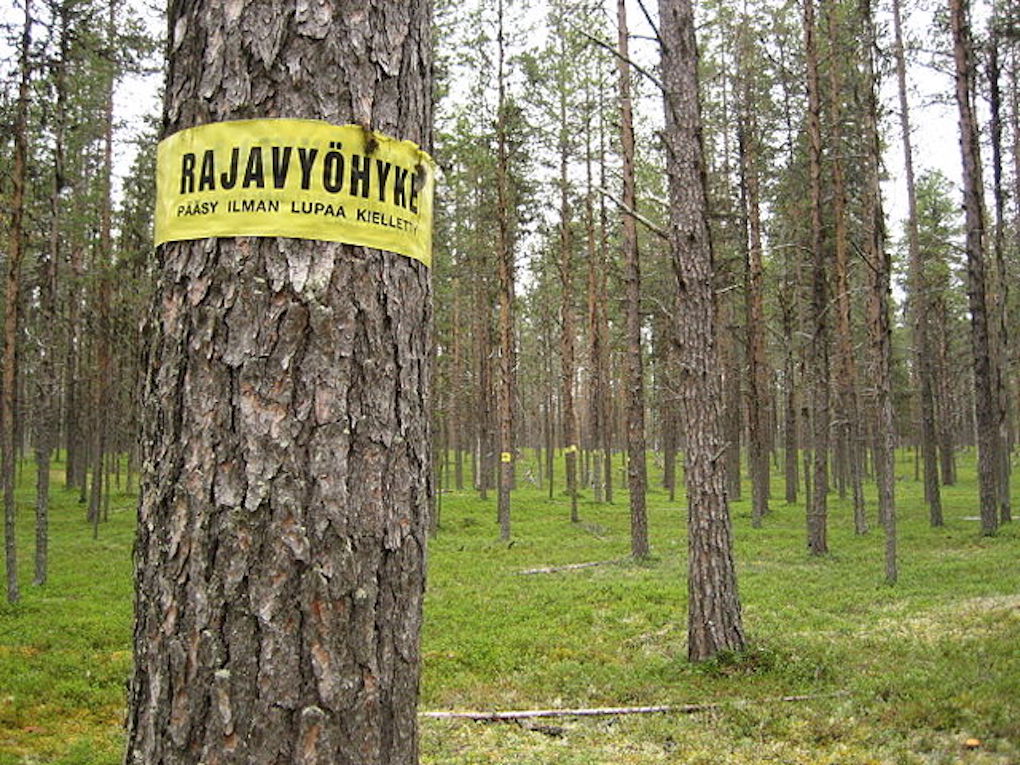 The peaceful - for now - Finnish border zone showing a sign on a Scots Pine in Salla, Finland. On the other side of the signs, there is a 3km border zone towards Russia. Text on sign: Border zone. No unauthorised access. Creative Commons Attribution-Share Alike 3.0

IT is worrying that two countries with a long history of wartime neutrality – Finland and Sweden – could apply for NATO membership within days. This is of course in response to the Russian invasion of Ukraine, but is it a wise move?

Wise or not, it is what the population apparently wishes. For years Finnish support for joining NATO has been at around 20-25%, but, since Russia’s invasion of Ukraine, it has reached a record high of 76%, according to the latest opinion poll. Finland adopted neutrality after their defeat by the Soviet Union during WWII, when they avoided occupation, but lost 10% of their territory, and this has remained so until now; whereas it goes much further back with Sweden. They have had more than 200 years of non-alignment, but now 57% of the population want to join the alliance.

NATO Secretary General Jens Stoltenberg has welcomed the decision from Finland’s leaders to apply for membership. “Should Finland decide to apply, they would be warmly welcomed by NATO, and the accession process would be smooth and swift,” Stoltenberg said, according to Reuters. “Finland is one of NATO’s closest partners, a mature democracy, a member of the European Union, and an important contributor to Euro-Atlantic security.”

Finland has a 1,340km (830 mile) border with Russia, while Sweden does not but has said it has felt in danger from Russia in recent years, with several reported airspace violations by Russian military aircraft, and in 2014 there were reports of a Russian submarine lurking in the shallow waters of the Stockholm archipelago.

Yet there are some in Sweden who believe their country will be less safe if they should join NATO. Deborah Solomon, from the Swedish Peace and Arbitration Society, has said that NATO’s nuclear deterrence increases tensions and risks an arms race with Russia. This complicates peace efforts, she says, and makes Sweden a less safe place. And she may very well be right.

What will Russia’s move be?

When asked whether this potential membership of NATO presented a threat to Russia, Kremlin spokesman Dmitry Peskov said yesterday, reiterating what Russian officials have said since the beginning: “Definitely. NATO expansion does not make our continent more stable and secure”.

Peskov said Finland had joined “unfriendly steps” against Russia and, when asked what Russia’s response might be, he replied: “Everything will depend on how this … process of NATO expansion plays out, the extent to which military infrastructure moves closer to our borders.”

Since the war began, it is reported that more than 7,000 civilians have been killed or injured. This figure comes from the Office of the UN High Commissioner for Human Rights (OHCHR). “The scale of unlawful killings, including indicia of summary executions in areas to the north of Kyiv, is shocking,” Michelle Bachelet, the UN High Commissioner for Human Rights, said in a video address to the UN Human Rights Council yesterday.

The UN human rights chief has said some 1,000 bodies had been recovered around Kyiv in recent weeks, adding that many of the reported abuses since the Russian invasion may amount to war crimes. Although, of course, with so much media banned, we are getting just one side of the story, and it’s unlikely we’ll get to the truth until this war ends.

Just who is the aggressor?

Russia has denied targeting civilians and calls its actions in Ukraine since the invasion began a ‘special military operation’ to disarm the country and rid it of what the Kremlin calls anti-Russian nationalism fomented by the West. Ukraine and the West say Russia launched an unprovoked war of aggression.

Some would say that NATO’s expansion ever eastwards since the end of the Cold War is aggression, while others disagree, but Finland and Sweden joining the alliance will certainly do nothing to end the heightened antagonism between the West and Russia. The US especially has long wanted to see the downfall of Russia, and their backing of Zelenskyy’s government and NATO is proof of this. The US cannot hold any moral high ground here – or anywhere else – given the number of countries they have invaded or interfered with, and the number of human rights abuses they ignore in other countries they ally themselves with, or indeed, in their own country.

This isn’t a ‘good vs evil’ war – it is an unnecessary and avoidable war, and when – if – the dust settles, we might just discover the only innocents are the dead and dispossessed. Leaders, on all sides, will be just fine.