Fighting the Evil Empire and I don’t mean Russia 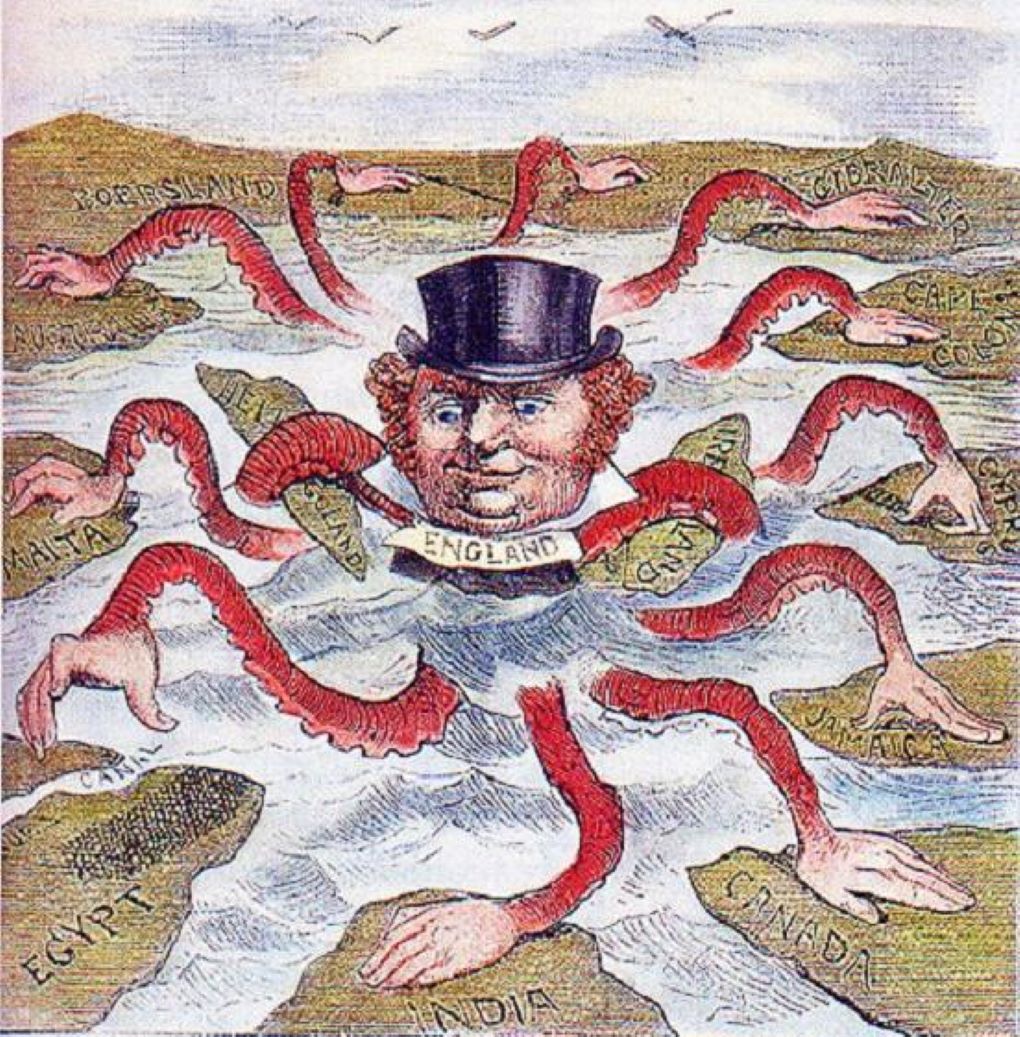 This work is in the public domain American cartoon of John Bull (England) as an Imperial Octopus with its arms (with hands) in - or contemplating being in - various regions.

We are still fighting against the legacy of empire in the UK. Our politicians and media may well condemn Putin’s imperial ambitions and trumpet the virtues of liberal democracy. But only up to a point.

Every country has had shameful episodes in its history and some countries have had the courage to acknowledge this and try to make amends. Germany obviously has had to confront the legacy of Nazism and the Holocaust. They have passed laws against displaying Nazi symbols. Holocaust denial is a crime.

The signs this week are not promising. First there was the ill-judged royal tour of the West Indies which was greeted with protests over true independence by becoming republics, and about slavery and the lack of reparations from the UK.

This was a particularly tone deaf tour. The first ever slaving vessel to sail under an English flag was authorised by Elizabeth I and the royal family subsequently amassed much of their wealth from sponsorship of companies like the Royal Africa Company, established in 1660 by the Duke of York, later James II. Enslaved Africans transported by the Royal African Company were branded “DY”, standing for Duke of York. In the eighteenth century the royals were especially keen on slavery as a way of increasing their wealth and easing their reliance on Parliament for funds.

Then Prince William told an audience in the Bahamas that the UK would respect any decision to become a republic. It’s a declaration of independence, William. Whether you respect it or not makes no difference. Ukraine does not want Russian ‘respect.’ It wants Russia to get the hell out of their country. Demonstrators in Belize, Jamaica and the Bahamas feel the same about Britain and its royals.

One way to deal with a shameful past is to teach the children so they never make the same mistakes again. Instead, our government has decided that the war in Ukraine is the perfect time to whitewash our history. The Education Secretary, Nadhim Zahawi, wants schools to teach “all aspects” of the British Empire including the “positives.”

As one teacher wrote,

Teaching my pupils the ‘positives’ of the British Empire would entrench white supremacy.

Teaching my pupils the ‘positives’ of the British Empire would entrench white supremacy (inews.co.uk)

This is part of a campaign by the government to exploit the war to impose their ideology on the nation. It includes the so called War on Wokery and attempts to suppress the teaching of Black Lives Matter in our schools.

Imperial ambition did not end with the end of empire. The UK now supports other imperialists, cravenly following the USA and backing Israel against the Palestinians and Saudi Arabia against Yemen. The Saudis have bombed Yemen back into the Stone Age with weapons supplied and serviced by the UK in a war that surpasses in outrageousness anything so far done by Russia in Ukraine. But it cannot surpass the expression of outrage while we continue to regard Yemenis, in contrast to Ukrainians, as not being ‘people like us.’ The imperial legacy continues to spread its racist poison through the veins of our body politic.

Meanwhile, despite the justified criticism of Biden for implying that US policy was regime change in Russia, Starmer has once more demonstrated his naïveté by calling for regime change in Russia and calling for greater sanctions against Russia to punish its people for supporting Vladimir Putin. Collective punishment, eh? What would the Geneva Convention have to say about that, Mr Human Rights Lawyer?

I have read arguments from Paul Wallace, the chief executive of Conservative Home, that Russian support for Putin and a failure to acknowledge the crimes committed in the name of Russian imperialism, going back as far as Czarist Russia and taking in the crimes of Stalin and his successors, mean that the Russian people share in the collective guilt of the nation.

Russian society has never been confronted with this bloodstained past, still less expected to reject it.

Of course Putin should go, but Russian society must face a reckoning too (inews.co.uk)

There is a special prize [Eric Hobsbawm’s book, The Age of Empire] for the first reader to find an article by Mark Wallace on Conservative Home calling on the British people to be confronted with our own bloodstained past and expecting us to reject the legacy of empire. And an extra special prize of J.A. Hobson’s classic text, “Imperialism” with a foreword by Jeremy Corbyn, for any reader who can provide us with a critique of British imperialism from a socialist perspective by the current leader of the Labour Party.