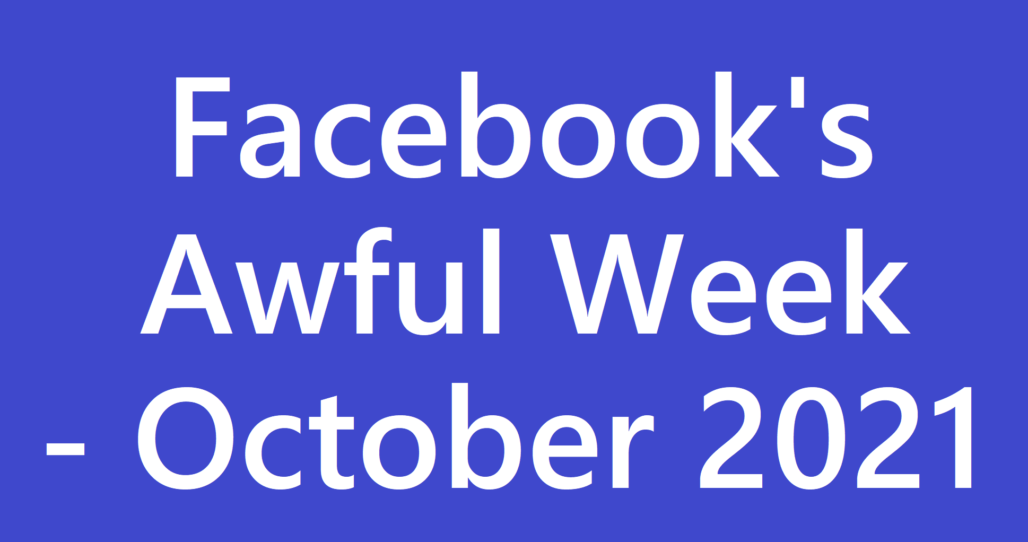 Last week (the week beginning October 4, 2021) was not a good week for Facebook, or for its subsidiaries. Or for its users. On Monday and Friday October 8, Facebook suffered two outages which brought its services down.

All of its services.

Facebook, Messenger, Portal, Whatsapp, Instragram, and even Oculus went down for several hours on October 4th. And this cost Facebook billions of US dollars. And here is how the Associated Press reported on the incident:-

The New York Times reported on the outages in its October 8 article Gone In Minutes, Out For Hours: Outage Shakes Facebook.

Facebook posted a report on the October 4th outage here.

What Caused The Outage?

Facebook’s official explanation reads like an exercise in translating Newspeak – Our engineering teams have learned that configuration changes on the backbone routers that coordinate network traffic between our data centers caused issues that interrupted this communication. This disruption to network traffic had a cascading effect on the way our data centers communicate, bringing our services to a halt.

This is a fancy way of saying that when they attempted to update the basic core software, they screwed up and brought the whole Facebook network down.

At least it was not due to Facebook being hacked, as Facebook’s official press release states:-

We want to make clear that there was no malicious activity behind this outage — its root cause was a faulty configuration change on our end. We also have no evidence that user data was compromised as a result of this downtime. (Updated on Oct. 5, 2021, to reflect the latest information).

But that wasn’t the end of the bad news for Facebook. On the same day as Facebook’s outage, 60 Minutes broadcast a segment featuring Frances Haugen, an employee of Facebook, who blew the whistle on Facebook’s toxic, enabling culture (CW: links to articles containing strong language).

And Business Insider posted highlights of the Senate inquiry into Facebook’s culture.

According to C|Net’s article the week before Frances Haugen blew the whistle on Facebook, the corporation was already putting the brakes on its “Insta!Kids” program:-

Facebook enabled Cambridge Analytica and spread disinformation across the UK with impunity. As a result, in 2016 it gave us Brexit and helped to install Trump in the White House in the States. And it almost cost the career of Jeremy Corbyn by promoting the Chicken Coup, and led to Johnson becoming the Prime Minister, with Dominic Cummings the puppeteer to Johnson’s Punch.

If the House of Zuck does fall, shed no tears for Mark. He will deserve every misfortune that is coming to him, even if that includes lengthy prison time.

Some links were supplied by Mozilla.