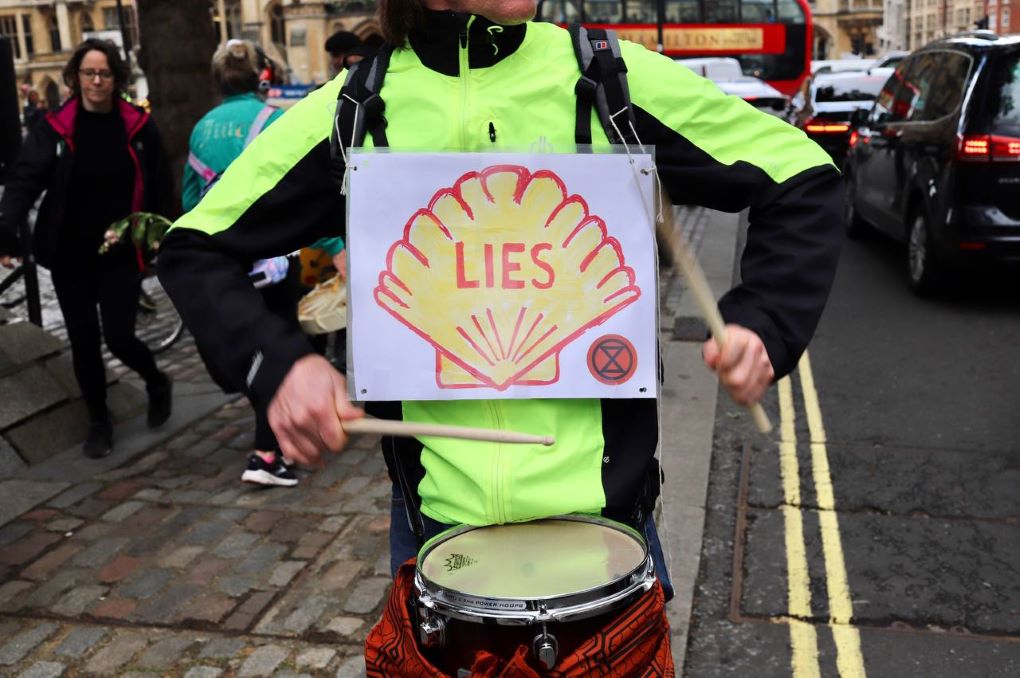 The Shell AGM being held in London on Tuesday was delayed by protests from Extinction Rebellion (XR) and their allies, including members of Money Rebellion, Christian Climate Action, Fossil Free London, Shell Must Fall and Stop Ecocide.

We Will Stop You

Some glued themselves to seats. A flash mob drowned out the Chairman’s opening speech, chanting “We Will Stop You” to the tune of “We Will Rock You.” Other protestors from the UK, Netherlands and Nigeria read out testimonies accusing Shell of human rights abuses, ecocide, fuelling climate breakdown and funding misinformation. Major investors like Blackrock and Vanguard were criticised, and outside the venue, the Methodist Central Hall, a banner was draped – ‘Shell Must Fall: Guilty of Ecocide’.

The day before, the AGM Shell’s senior safety consultant, Caroline Dennett, announced her resignation in a video. She had come to question her position after a previous XR protest at Shell’s London HQ in April this year. XR says this in their press release.

Dennett said the fossil fuel giant has a “disregard for climate change risks” and that she “can no longer be a part of it.” Addressing her former colleagues directly she said: “The fossil fuel industry is the past. If you can find a way out, please walk away while there’s still time”.

Shell is driven by corporate greed to expand fossil fuel production with total disregard for all the evidence on climate change. Even without the artificial hike in prices caused by speculators rushing to profit from the uncertainties of the war in Ukraine, Shell were making massive profits until the Covid pandemic and the war is boosting their profits to even higher levels.

And while the Treasury has resisted calls for a windfall tax so far, they have happily pocketed a windfall tax hike from the rest of us. As energy prices and profits boomed, and while Shell arranged its tax affairs that it paid no tax in the UK, we saw the cost of energy double, and with it, the VAT we pay on our gas and electricity bills.

As usual, the news media largely ignored the protest by Extinction Rebellion. They prefer to characterise climate activists as cranks who antagonise the public and damage their own cause. We say they should be applauded not vilified. Stopping climate catastrophe is something that should unite us all.