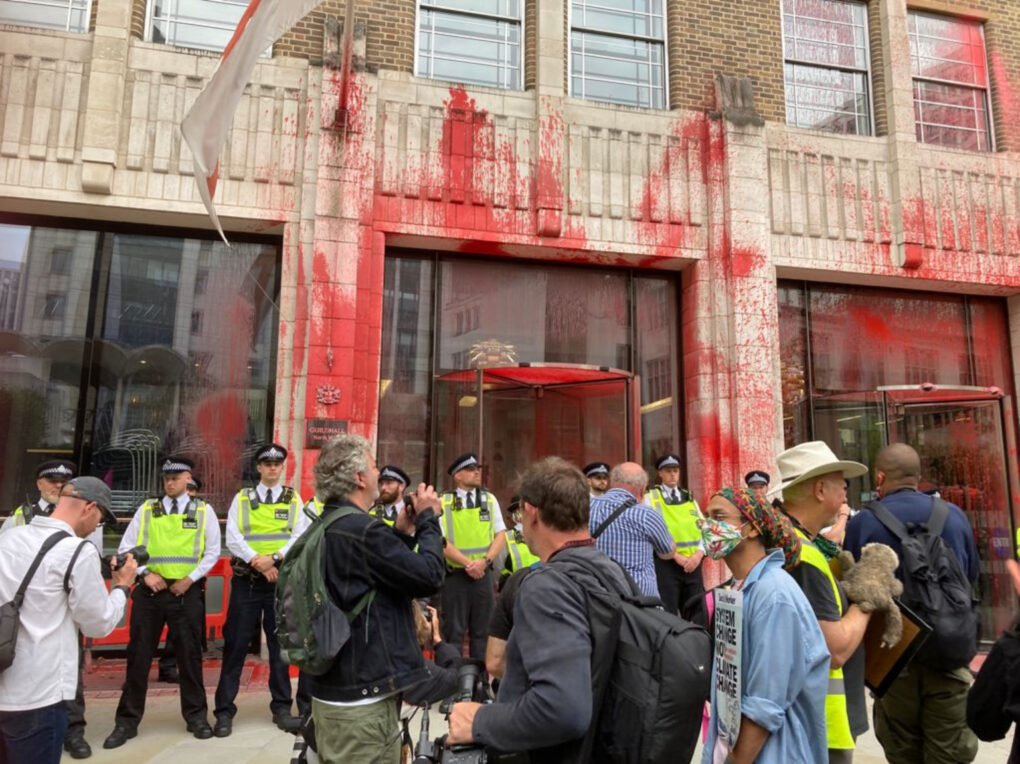 Yesterday’s March, one of a series, attracted about 1000 ‘rebels’ marching through the City. It passed landmarks which XR highlighted as being involved in the “bloodsoaked profiteering of our economic system”.

The protests which began last Sunday have resulted in more than 200 arrests. An appeal is currently circulating on the web to help pay their legal fees.

According to XR capitalism is responsible for most of the issues which are causing global warming. Carbon emissions are one of the main causes of the warming that is rapidly bringing the Earth to a point where it will not be suitable for human life.

The top 9 polluting companies produce over 9.3 million tonnes of carbon emissions each year.

Not only are these companies producing massive amounts of pollution, they are also funding groups to spread misinformation. It could be said that not only are large companies poisoning you, they are convincing you that it is in your interest.

All nine of the companies are involved in oil and gas production. A lot of the research on cutting emissions has concentrated on changing the behaviour of these companies. One means of doing so is by ending fossil fuel subsidies. But a recent paper in Nature magazine suggests that reforms such as this will have little effect. Ian Parry, of the International Monetary Fund, suggests that reforms will make little impact: “I think that reform of fossil-fuel prices needs to go well beyond aligning them with production costs,” he wrote. “Fuel prices should also reflect the consequences of their use for global warming and other environmental considerations, such as the costs of deaths resulting from air pollution and, in the case of road fuels, traffic congestion and accidents.“

The Extinction Rebellion protests are a consequence of the simple fact that a profit-oriented system cannot reform itself. To reduce carbon emissions will require substantial lifestyle differences that will not be achieved by this or that subsidy change. As XR have made clear currently the worst polluters get rewarded for poisoning the atmosphere for the rest of us. If the only way they will stop is by being rewarded for stopping what they should not have been doing in the first place we are at the mercy of companies whose sole function is enriching its wealthy shareholders.

As XR point out: “Our life systems are at breaking point and world leaders aren’t coming to save us. Floods, fires and droughts are happening everywhere we look, right now – from China and Germany, to North America and India. But the change we need will only come from ordinary people – lots of us – taking action. We’re told it’s impossible. Well, it’s time to imagine the impossible, the future we fear and the future we want – and then go for it.”

The Extinction Rebellion protests are ongoing. You can join the rebellion at Join the Rebellion