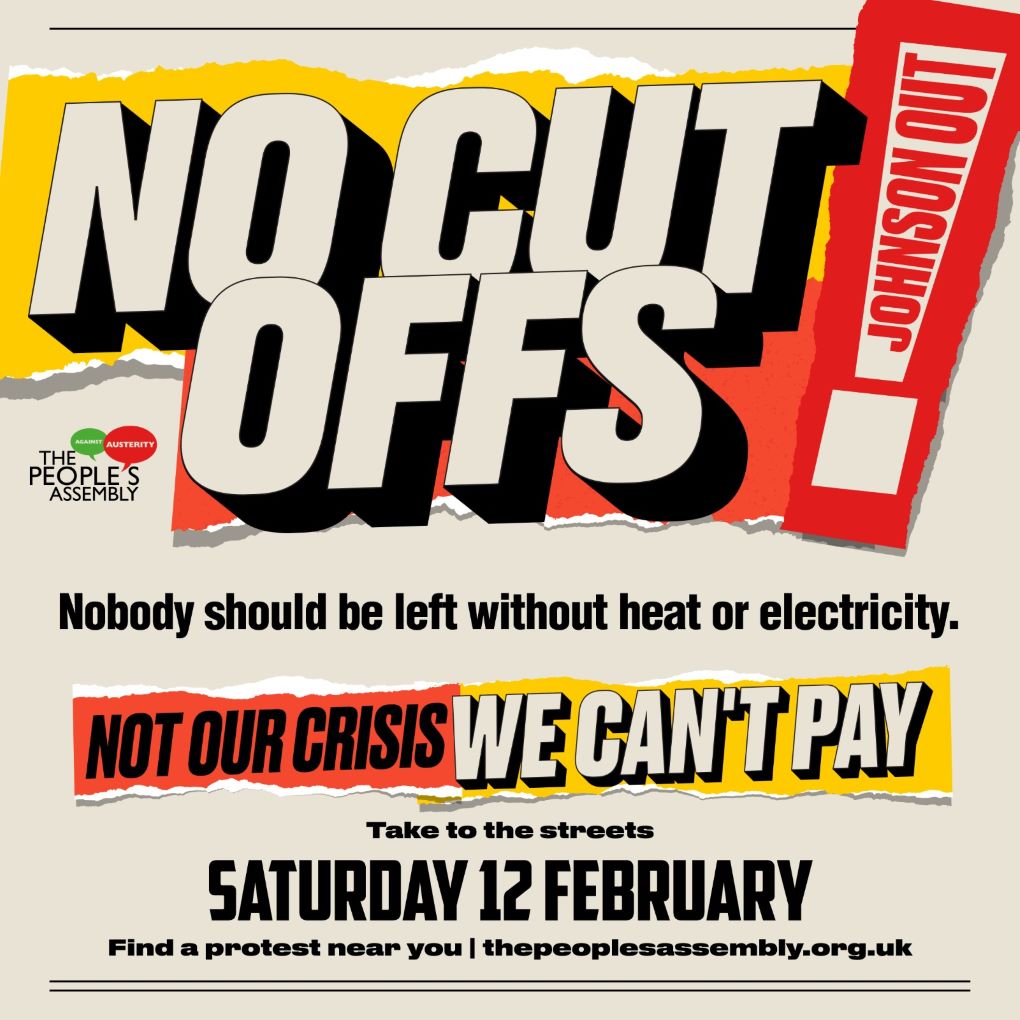 No Cut Offs! Johnson Out! There will be a day of protests across the UK on February 12th in response to yesterday’s energy price hike. Check out The People’s Assembly website for details of a demo near you.

That was the week that was! Alongside a mass exodus of officials from Number 10, (not many leaving parties, though, I’d warrant!) we learned that energy bills are set to rise by 54% – that’s about a £700 rise for the typical household to about £2000 p.a. In case you haven’t guessed, that’s a record by the way. Then we had the government’s response from Rishi Sunak. He’s giving us £350 off our bills this year, £200 as a loan, and £150 off council tax which will not have to be repaid.

I’ve no doubt that some will welcome this, but it’s a sticking plaster on a gaping wound, and what makes it worse is that it came at a time when Shell announced a whopping profit of $19.3 billion, up from $4.8 billion in 2020. Share prices in energy companies have also risen by 70%. And, as we reported on Friday, Shell is proposing a massive buy back of shares that will hand $8.5 billion back to shareholders.

The reality is that Sunak’s £350 ‘handout’ will be more than cancelled out by the rise in national insurance, and, to add to the pain, the Bank of England has announced an interest rate rise at a time they are predicting that inflation will rise to 7.4% by April. If you’re lucky enough to have a mortgage, you will see a rise which will also help to wipe out Sunak’s package. Profit hungry energy companies are behind the inflationary drive. But the Bank of England is now suggesting wage restraint is the answer! This, when the average family can expect a cut in its living standards worth £2,417 this year.

All of this comes at a time when the government has announced that it has written off £8.7 billion which was spent on dud PPE in the early part of the Covid crisis and £4.3 billion in fraudulent Covid business loans. We already have over 14 million families living in poverty, and this appalling situation can only get worse.

Meanwhile, in France, the energy company, EDF has been forced to take a hit by the French government limiting its price hike there to 4%. All over the EU, member states are making a mockery of Johnson’s ‘Brexit Bonus’ and Sunak’s half measures by cutting energy taxes, subsidising fuel costs and clawing back the energy giants’ super profits with windfall taxes.

It helps in France that EDF is government owned. But EDF is also a significant supplier in the UK alongside the German owners of NPower and E.ON and the Spanish owners of Scottish power. Between them they supply energy to half of UK households. If you want a measure of their ‘Brexit Bonus’, compare the price of electricity in France and the UK. EDF charge the highest prices in France, around 13p per kWh. In the UK their standard rate is 50% higher at nearly 21p per kWh! And that is before April’s price hike!

The problem is that there is no light at the end of the tunnel. The appropriate response to the ongoing energy crisis, poverty crisis and the climate crisis needs to be a green new deal containing a massive programme of home insulation and expansion of renewables. Such a programme could create tens of thousands of meaningful and decently paid jobs which would help with the government’s so-called levelling up programme which will make no difference to poorer communities. We also need to see public ownership of utilities,  proper taxation of banks, corporations, and the 1%, and a universal basic income*.

There’s nothing new here. I’ve been saying this on my blog for over a decade but as long as we are saddled with a ‘free market’ neoliberal government none of this is going to happen – not unless the government’s hand can be forced electorally and by protest or strike action. Tory and Labour governments are working for the banks and corporations – not for the people. We need radical change and we are going to have to fight for it if we are going to free ourselves from an even more dystopian future. Let us hope the demonstrations this Saturday are just the start of that resistance.

* Guy Standing has written about this and I recommend you read his book Battling Eight Giants: Basic Income Now.

One thought on “Energy Crisis: No Cut Offs! Johnson Out!”