Economic democracy is the key to control 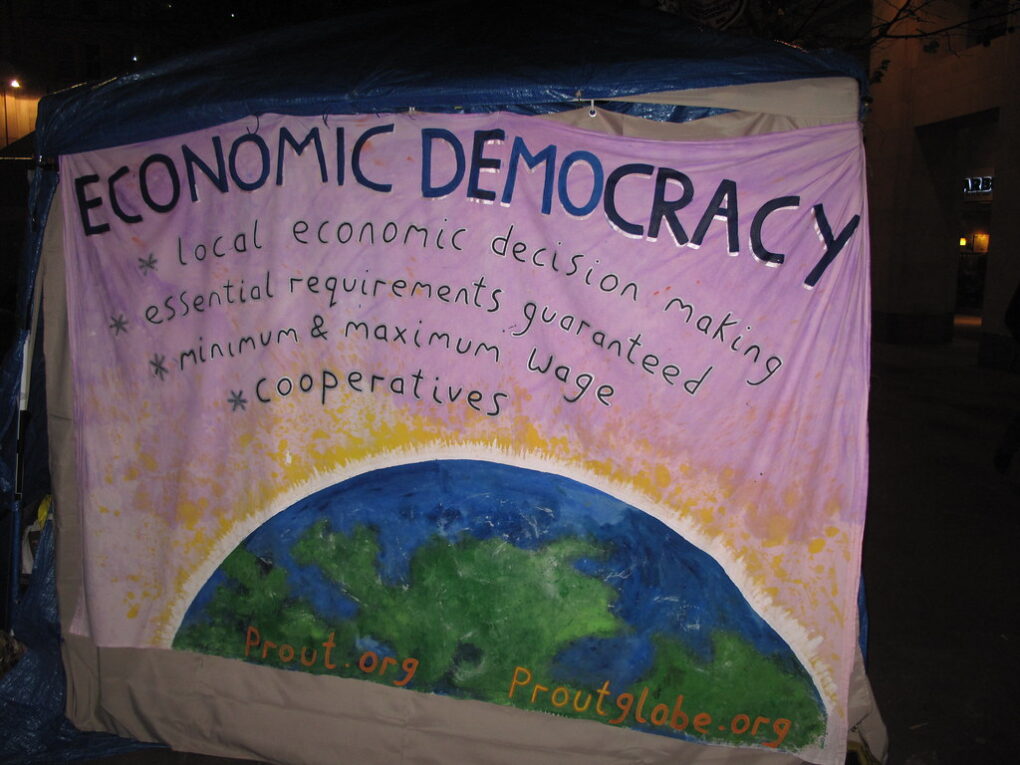 "Economic Democracy" by duncan is licensed under CC BY-NC 2.0

If we want to bring about a fundamental change in our economy and take back control, economic democracy is key.

We are still in an age of neoliberal austerity despite what Boris Johnson would like us to think, and the recent rise in national insurance contributions and £20 cut in universal credit demonstrate the government’s contempt for the low-paid and the poor. Expect a tough budget from Rishi Sunak which will do nothing to provide the investment in the NHS and public services the country really needs. A key problem is that the neoliberal austerity policies pursued in the past decade have reduced the share of national income for working people and have depressed demand in consumer-capitalist societies. This was confirmed in the following article in the Wall Street Journal which states:

In other words, neoliberalism is self-defeating. Erm… but isn’t our government meant to be doing what the private sector – the market – wants? The corporations and banks wanted austerity to make us pay for the crises they have caused and to trash the welfare state but they also want us to be able to buy their products!

If we can’t rely on either governments or the private sector to lift the economy and produce the good quality jobs that we so desperately need – for example through a Green New Deal – what are we going to do? Well, we can forget the banks and the corporations because they are not going to help us. They are part of a failing neoliberal economic system that is essentially exploitative and destructive, a system that is eating the planet, and, in the process, destroying the prosperity of most of us, of the 99%. As capitalism gobbles up the planet’s resources, cannibalises the public sector, and indulges in an orgy of financial and property speculation in order to try and maintain its falling profitability, millions of people are suffering globally. Not just people in the global south, but people in the once-prosperous west, and nowhere did that become more obvious than in Greece, which has been on the front-line of neoliberal austerity.

If we look back to the great financial crash of 2008, one of the starkest outcomes of the debt crisis was in the modern home of capitalism itself, the USA. Detroit, the motor city, and a once-great powerhouse of American capitalism was devastated. At the time, Paul Craig Roberts wrote about this in The Ruins of Detroit :

“Detroit’s population has declined by half. A quarter of the city’s 35 square miles is desolate with only a few houses still standing on largely abandoned streets. If the local government can get the money from Washington, urban planners are going to shrink the city and establish rural areas or green zones where neighborhoods used to be. President Obama and economists provide platitudes about recovery. But how does an economy recover when its economic leaders have spent more than a decade moving high productivity, high value-added middle class jobs offshore along with the Gross Domestic Product associated with them?”

But amongst the ruins of Detroit, at the grassroots, economic activity began to stir. There was a grassroots revolution. People came together and realised that if they want a better economy they were going to have to do it for themselves, and they started to rebuild from the ground upwards through co-operatives like the Evergreen Co-op. What’s so inspiring about this re-birth is that it is community-focused and led not by overseas investors or the ‘entrepreneurs’ of neoliberal myth, and hungry for a buck, but ‘ordinary’ citizens, and what it shows us just how extraordinary we ordinary people can be. Here is an extract from the Re-imagining Work in the Motor City conference:

“In another discussion, participants acknowledged that relying on political and economic leaders to lead was a fruitless endeavor because they have forgotten the people they are supposed to represent. A “we have to do it ourselves” attitude permeated the conference in a recognition that representative democracy is in serious decline. Besides, they said, societal change usually occurs at the grassroots level—and rigid social class distinctions and hierarchies have no place in the new economy we are envisioning”. [my italics]

We don’t need them

People in Detroit realised an essential truth – that capitalism dis-empowers all of us. The system is designed to make us think that we need the super-managers and capitalists, that without them we just couldn’t survive. This system is designed to keep us in our place and to keep them in the luxury that only they can afford. But as a result of the 2008 crisis, in which whole communities were abandoned, this myth has been busted, because more and more people are beginning to understand that they need us but we really don’t need them.

But this didn’t just happen then in Detroit and neither did it end there. All over the USA people began to turn their backs on capitalism and the banks and find their own solutions by building their own economy. According to Gar Alperovitz in his New York Times article entitled Worker Owners of America Unite:

“Some 130 million Americans, for example, now participate in the ownership of co-op businesses and credit unions. More than 13 million Americans have become worker-owners of more than 11,000 employee-owned companies, six million more than belong to private-sector unions.”

That was a decade ago and things have moved on since then but the politicians and corporations who control our economy want us to believe that it can be restored, but only on their terms. In the process, they are making the workers and poorest pay for the crises that they have caused, and they’re also beginning to scrape the bottom of the fossil fuels barrel with tar sands extraction and shale gas exploitation, both of which are environmentally destructive. These are acts of desperation, meant to prop up a failed system that has run its course.

The truth is that we cannot rely on capitalism and its tame politicians like Biden and Johnson to help us. Essentially, we are on our own. But that, despite the hardship, gives us an opportunity, an opportunity to build an economy that we own and control ourselves. Such an economy needs to be cooperative and community-based, supported by local banks and credit unions, which are subject to democratic control.

One of the most important and influential groups in spearheading the drive towards economic democracy globally is the Democracy Collaborative founded by Ted Howard and Gar Alperovitz. They developed the idea of ‘anchor institutions’. These are organisations such as the city council, universities, and hospitals, all of which have large budgets. If organisations like these can be persuaded to become involved in community wealth building they can have a significant impact on a local economy. They do this by spending much of their budgets locally, employing local contractors, and keeping that money in the local economy. This is the basis of the Preston Model in the UK. Local workers’ cooperatives are being formed in Preston. One of the outcomes is that the spend within the wider Lancashire economy (including Preston) was £488.7 million up from £200 million in the baseline analysis. Community wealth buiding works.

Co-operatives create local wealth and employment, they are rooted in communities, they do not downsize or outsource jobs overseas. They build strong local economies that are resilient in the face of climate change. Best of all, there are no fat-cat managers or owners to cream off the bulk of the wealth that is created. The good news about copperatives is that we can build them now, and there are sources of funding in the UK. We can begin to build our own economy. That does not mean we should ignore political parties, we need to work together on the left to support and help build parties that promote this kind of economic development. We must help to propel such parties, through the democratic process, into government. Then we can get down to the business of rebuilding an economy that is truly our own.