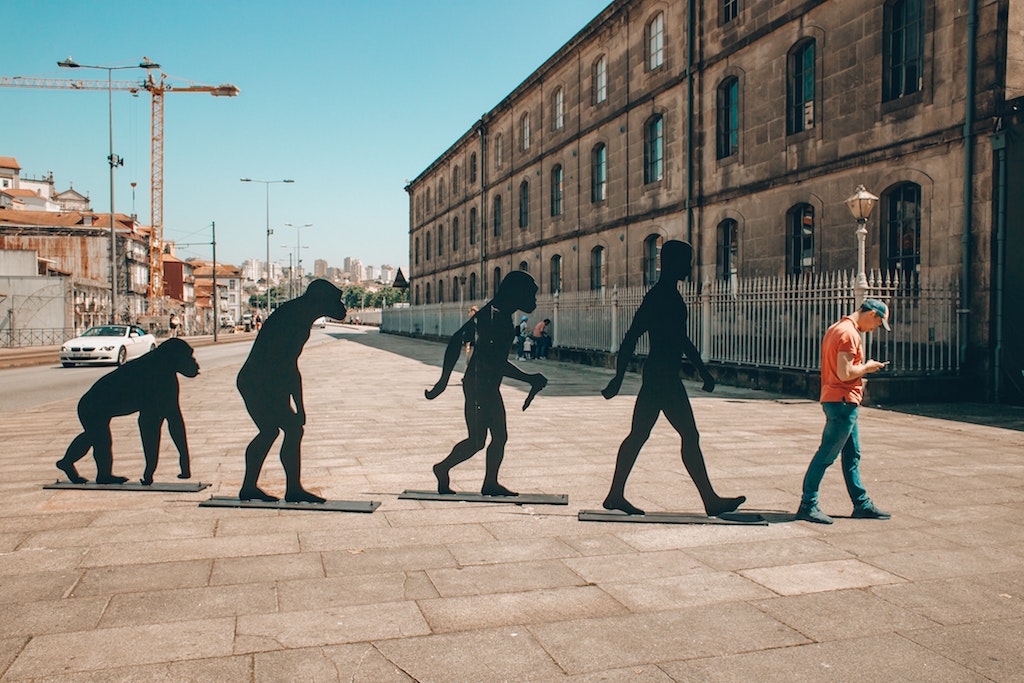 Photo by Eugene Zhyvchik on Unsplash

According to one source, The Smithsonian Museum, human evolution is defined as

Modern humans began to appear on this Earth about 300,000 to 100,000 years ago. By comparison, the Earth is tens of thousands of times older than that, and the universe itself is unimaginably old.

Yet, in terms of time, the universe itself is still young, and the human species is as young as a blink of the cosmic eye.

The Origin of Evolution – Charles Darwin

It’s a safe bet that most people have heard of The Origin of Species, but they have probably never actually read it. The whole point of the argument was that all species are here as a result of them being lucky in nature. Random chance, and a billion years of changing environments, statistically favoured the present species. Random chance and mutations drive change, and the result is all the species on Earth.

The Evolution of Humans

Humans are a product of evolution. We belong to a genus, Homo, with just one species – Homo sapiens (sapiens being the Latin word for “wise,” and the jury’s out on that one).

We’re the survivors of a process of aggressive, competitive natural environmental changes. Evolution set a bunch of other hominin species loose on the world – Neanderthals, Homo erectus, and so on – but of those different human species, only the humans, Homo sapiens, you see around you survived 300,000 years of tsunamis, earthquakes, plagues, and supervolcanoes, to stand upright and proud right next to you in the queue for Starbucks.

The Future Of Humanity

The last century saw a unique new branch of speculative fiction, fuelled by the unfolding revelations about human evolution. Science fiction authors’ writing began to include speculative possibilities that Homo sapiens would somehow give birth to the species which would survive it.

Olaf Stapledon wrote two novels on the theme of human evolution. Last and First Men looked at how the future of humanity could unfold if evolution were to generate successive species of humans, leading to a tragic end when the stars, including Sol (our star) started emitting poisonous radiation.

Similarly, Odd John gave us a first glimpse into the mechanism which drives evolution – mutation. John, the protagonist, was an unusual human, who turns out to be a genetic accident with advanced abilities above and beyond his sapiens peers. He was the first example of psychic abilities being manifested by advanced humans. John possessed telepathy, clairvoyance, and a form of mind control – and he was not the last example of this trope.

This long-running comic book, movie, and TV series was created in 1963, the same year the BBC created Doctor Who. The concept was that the atom bomb had forced humans to evolve rapidly into the next stage of evolution, yielding superheroes.

That pretty much spiralled into your standard four-colour Spandex fight fests with some occasional dipping into romance tropes – but the series did create a slew of psychic mutants, such as Emma Frost, Charles Xavier (“Professor X”), and the mutant known as The Purple Man (played by David Tennant, who has also played The Doctor in Doctor Who).

Early in the Original Series, psionics were prevalent in the first few episodes, from the M-113 Salt Vampire’s ability to shroud its true appearance, to Charles Evans’ telekinetic abilities in “Charlie X,” no relation to Professor Xavier above; and the mutated creature which was once Lt Cmdr Gary Mitchell, Starfleet, in “Where No Man Has Gone Before”.

This cult movie charted the evolution of humans, and introduced a truly science fiction element – namely, that an unnamed species of Overseers had jumpstarted human evolution a few hundred thousand years in the past, and accelerated our evolution to the point where we could visit the stars; then left behind devices to draw us towards a place where they could jumpstart the next phase, the creation of the Starchild – our next evolutionary phase.

In the Seventies, Roger Price picked up the evolutionary baton and ran with it. His show The Tomorrow People tackled human interest stories, told from the point of view of a tiny gang of superpowered humans of the species Homo superior, a name which had been taken from Odd John, Stapledon’s novel.

Evolution of The Mind: The Psychonauts

Parallel to the stories featuring the evolution of humans in popular culture, real-world experimentation into the steering of the evolution of humanity was taking place. These experiments were fuelled by the discovery of lysergic acid diethylamide, LSD, by Doctor Albert Hoffman. This cause was enthusiastically taken up by the late Dr Timothy Leary and Terence McKenna, and these experiments seemed to be beginning to yield interesting results, until the authorities cracked down on the whole thing.

At the same time, in the UK, an enthusiastic cabal of three experimental pioneers – Peter J Carroll, Phil Hine, and Ray Sherwin – began a movement which was intended to be the wave of the future, Chaos Magic – a movement which brought Alan Moore and Grant Morrison to the public’s attention, in the form of Watchmen, The Invisibles and the inspiration for The Matrix, which went down a rabbit hole and took popular entertainment away from the thought of human evolution.

The new and developing medium of tabletop roleplaying games took a huge leap with the arrival in 1977 of Traveller. Psionics are included in this setting, but evolution is not.

However, some other games systems such as The Design Mechanism, a Canadian RPG company, have brought about tabletop science fiction roleplaying games in which there is some room for the possibility of human evolution becoming a theme.

One of them is Luther Arkwright: Roleplaying Across The Parallels, a roleplaying game where you play the roles of agents of an agency which travels across different parallel universes. and an Their most famous agent is the immortal Luther Arkwright, the first of a new species of human called Homo novus. The game is based on a series of graphic novels created by author Bryan Talbot.

The first 22 years of this century have been bereft of pioneering authors who enthusiastically supported the acceleration of human evolution, and the ones who are left are largely supporting the repugnant – and debunked – concept of eugenics instead.

Humans’ genomes are impossible to evolve through the same tools humans have used to domesticate animals, but eugenicists still pursue their offensive dreams of master races, even though the product of their efforts is looking less and less fit to survive with each generation.

Fiction which focuses on human evolution has stalled. Apart from Bryan Talbot, there are no new Olaf Stapledons, no new Kubricks, and no new Timothy Learys to conjure up the next Odd John or Tomorrow People. When stories reach the TV or movies, they are turned into Spandex adventures or tentpole blockbusters with a glut of CGI special effects to cover up the fact that the stories are usually flat, shallow, and tawdry.

The current year is one of strife. Backwards nationalism, war, political shenanigans, autocratic regimes, global warming denial, toxic people on the internet, the erosion of democracy, rampant capitalism, and a general reversal of everything humans had struggled for from the Sixties … all of these factors are contributing to a world where Homo sapiens has steadily become less and less qualified to retain the sapiens label. Perhaps we should look for a new author to write a story about human evolution, an optimistic look which dares to dream of Peter Carroll’s vision of humanity’s descendants practising their strange rituals of life among the stars, rather than huddled in the ruins.

And maybe we should be looking around the world to see how we can help human evolution along. The next human species won’t come from middle class suburbia. It’ll come from the slums and the favelas. How the next species of genus Homo will react to us will depend on how we treat it. So we’d best be kind.