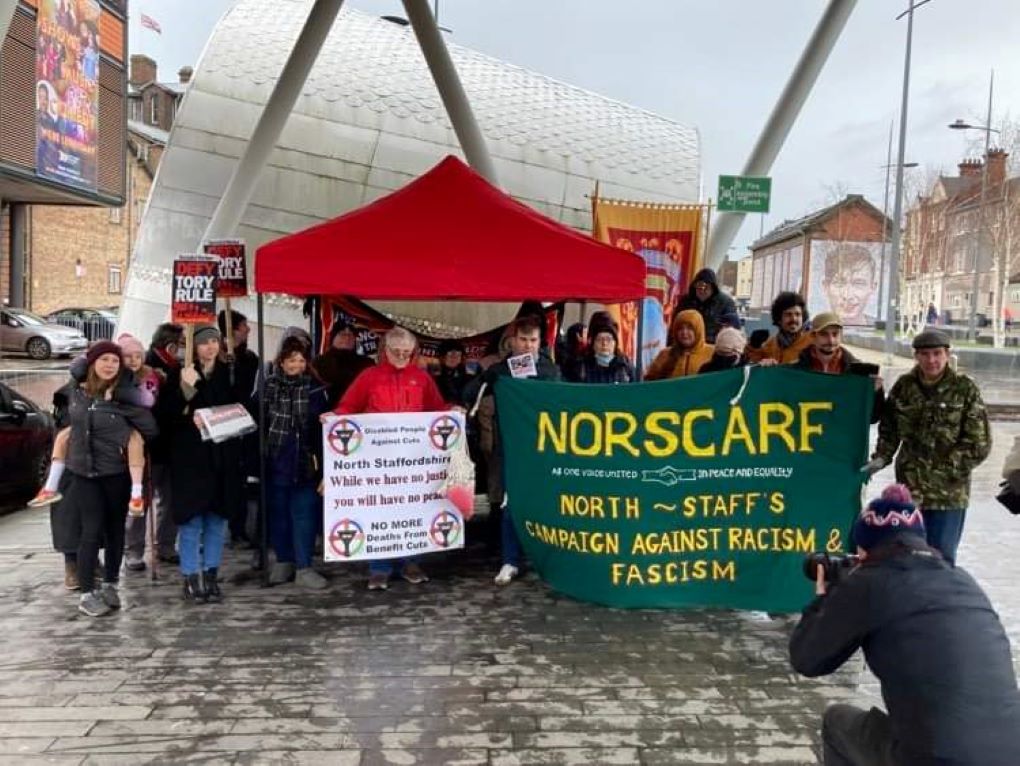 THE Energy Price Crisis feeding into the Cost of Living Crisis led to nationwide protests called by the Peoples Assembly which attracted thousands of people on Saturday. And as fossil fuels are also feeding the Climate Crisis we face a double whammy.

That is why people assembled in all our major cities for rallies with trade union support and headline speakers. And in other towns and cities people rallied. Critical Mass thanks our writers Jo, Ann, Shippo and Tan for sending us these pictures from London, Eastbourne, Stoke and Birmingham.

In London, Jeremy Corbyn and Lindsey German from Stop the War, undeterred by Starmer’s recent attack on them, were joined, among others, by striking security guards from Great Ormond Street Hospital, disability rights campaigner Paula Peters from Disabled People Against Cuts, Fuel Poverty Action.

In Manchester, Laura Pidcock was one of the speakers at the rally supported by Unite the Union.

The Public and Commercial Services Union (PCS) provided support and speakers for rallies around the country.

In Glasgow, Liz McGachey was joined by:

Much has been written recently about the cost of living crisis caused by rises in inflation and energy prices. Energy prices are set to rise by 54% in the UK, and inflation is expected to peak at 7.4%. This is going to cause considerable hardship for millions in the UK. Thanks to the work of Jack Monroe we know the national inflation figure doesn’t reflect the real increase in costs for families on low incomes because it doesn’t accurately capture the even steeper rises in staples such as food that people buy in their local supermarkets. Also thanks to Jack we know that prices of foods such as pasta have risen by 141%. At least the ONS has now agreed they are to look at the cost of food and consider the effect on a wider range of groups in society.

Another important contributor to the cost of living crisis, which hasn’t received as much attention, is a steep rise in rents. The Guardian has reported:

“The average cost of renting a home in the UK is approaching £1,000 a month after demand drove prices up 8.3% in the final three months of last year, marking the fastest increase in more than a decade.

Renters around the UK are now paying £62 more each month than before the pandemic, taking the average monthly rent to £969, according to property website Zoopla.”

Clearly there is now a strong case for rent controls which, whilst commonplace across Europe, are controversial, as was seen in Germany recently, where the German High Court ruled them to be illegal. The fact that Conservatives, landlords and construction companies were so determined to overturn the rent cap is pretty much all the evidence socialists should need to get behind them. In addition, the construction of more social housing should be high on the political agenda of any political party claiming to be socially progressive. In 2019, Labour had committed to building 100,000 affordable homes for rent by 2022. But, since Starmer became Leader and appointed Lisa Nandy as Shadow Minister for Levelling Up, Housing and Communities there has been no substantial announcement on housing at all.

But its not just the poorest who are affected by rises in energy prices. There has been widespread anger at Rishi Sunak’s £200 loan towards the cost of energy bills, and there have been calls for a windfall tax on energy companies reporting huge profits. Even for those who can now afford a mortgage, the average price of a house reached a record high of £276,759 in January, a near £25,000 increase on last year. As if the rise in the cost of housing was not bad enough, those who have bought new houses have been hit with an extra bill of £234 million because of poor energy efficiency standards. This is because the Tories scrapped the zero carbon homes standard in 2015.

So, while we face a massive increase in energy costs, we also know that the homes we live in are contributing to the climate crisis which threatens all our futures. Of course there is a solution to the energy and climate crises. This involves the insulation of homes and a rapid transition away from the use of fossil fuels including gas. Such a transition is possible and some countries are already leading the way. The Rapid Transition Alliance has shown that change has already begun and is accelerating. In the Netherlands:

“In July 2018, six business associations representing everything from distribution systems, to construction companies and housing corporations, announced an initiative to disconnect at least 100,000 houses from the gas grid by 2021 and by late 2018, 27 cities presented a plan to each take at least one neighbourhood off gas by 2020.”

Johnson Out! Tories Out!

We have a solution to the energy crisis which will help us to solve the climate crisis and the cost of living crisis. What is lacking is the political will to deliver the changes we need. This will always be the case while we have a Conservative government which is more interested in corporate profits than the pubic good. Change for the better has to start with a change of government. But a change of government which attempts to solve the crises of capitalism with an over-reliance on free market solutions will be no change at all. Socialists must resist the temptation to see changing the government as an end in itself and must fight for the socialist policies that not just our country, but the world, are crying out for.