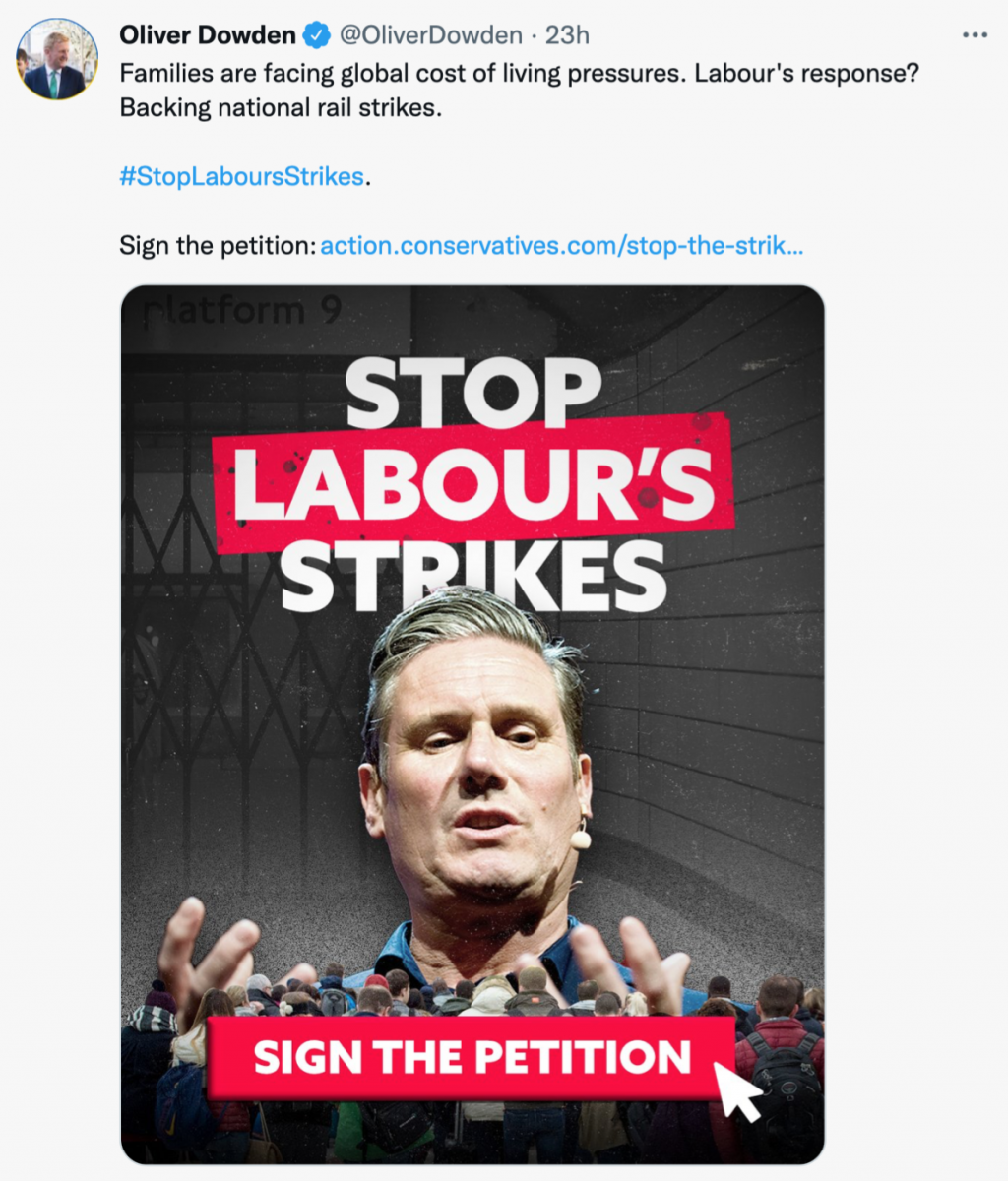 Image from Twitter. These are not Labour's strikes. They are working people trying to defend themselves against the Tories.

WHILST the Tories are busy flooding social media with a petition to ‘Stop Labour’s Strikes’, saying that Labour is backing ‘the biggest rail strikes since 1989’ and that dozens of Starmer’s colleagues have backed ‘Labour’s summer of chaos’, Starmer has been noticeably silent on the strikes, as have many Labour MPs.

Firstly though, let’s lay one of their lies to rest. The RMT union is not affiliated to the Labour Party so the Tories are dead in the water at the beginning. Not that a little technicality like truth will stop their supporters from lapping up the allegation. In fact, Starmer has not backed the strike action nor has his deputy Angela Rayner who called the strike action “lose-lose” for all sides.

Lisa Nandy has done an admirable job of fence-sitting on the issue, saying Labour is “on the rail workers’ side” but also that they “want to avoid the strikes and we’re on the public’s side on this”. and Wes Streeting said a few days ago that if he were an RMT worker “I would be voting to go on strike and I would be voting to defend my job, terms and conditions”. Maybe admirable statements, but current and ex-Labour supporters see both Streeting’s and Nandy’s statements as nothing more than them trying to con prospective voters, in a possibly pending leadership contest, into thinking they are now on the left of the party. Most commentators appear to think a leadership contest is in the offing and they will throw their hats into the ring and are hoping for support from the left of the party, whatever that is these days.

However, there are still a few Labour MPs with principles and who stand on the side of workers, striking or not. We could have guessed who they would be without the right-wing press slamming them as ‘being in the pocket of the unions’. Rebecca Long-Bailey, Diane Abbott, John McDonnell and Ian Lavery have all come under fire for receiving donations from RMT in the past. Small donations, from around £2,000 to £5,000, which total about £20,000 and is chicken-feed compared to donations received by Tory ministers. Just one example is the £1.3 million in donations and gifts from climate sceptics and fossil fuel interests since the 2019 general election.

It should also be noted that the petition circulated on social media appears to be a data mining attempt as before one can even say whether they are on the side of the union or not, they must give their personal details and also give permission to the Tories to use that data. Oliver Dowden, MP for Hertsmere and Chairman of the Conservative Party, who tweeted the petition late on Monday also stated in his tweet that “families are facing global cost of living pressures”.

This is the Oliver Dowden who has received over £6,000 in two years from the Policy Research Unit which is a Conservative organisation. But we know that Mr Dowden is struggling with the cost of living pressures as on 1st April 2019 he was forced to make a claim for expenses totalling 23p for driving around his own constituency. And, we promise, that is not an April Fools joke.

Putting the word ‘global’ in may fool Tory voters who want to believe the government can do nothing about the cost of living crisis but one need only look at countries in Europe to see this is not the case. What they are facing is not “cost of living pressures” but the consequences of government policies and ineptitude which mean that whilst inflation in our nearest neighbours is around 4%, in the UK it has just topped 11%. Just who is responsible for this cost of living crisis?

France and Italy have both limited energy price increases, Germany is topping up benefits and has also put in place a three-month scheme offering all citizens the use of regional transport for only €9 a month. In New Zealand the government is giving low-income families a weekly payment of $27 (£14) for three months and have also reduced fuel prices and the cost of public transport. Mr Dowden and his Eton mates are, on the contrary, reducing benefits for those already struggling.

Our government could help with the cost of living crisis. They choose not to. Just as they choose to blame unions for a crisis, which whilst not wholly of its own making as the effects of the pandemic and the war in Ukraine cannot be discounted, they could do something about. We must not let them get away with even more lies, but it would be nice if we had a leader of the opposition who would come out, back the unions and lay the blame at the feet of the Tories, where it belongs. In the meantime, we must continue to back those taking the fight to this corrupt, incompetent, lying government. Which means supporting the RMT.