Dockers: remembering a way of life. 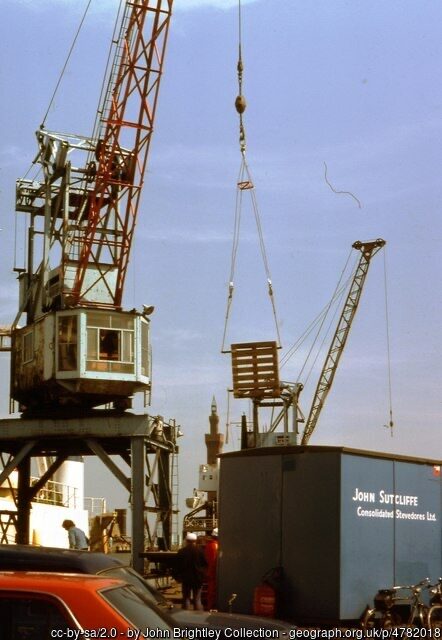 Father and Son, my post on my family’s socialist tradition referred to my time as a docker. I worked as a registered dockworker on Grimsby and Immingham Docks from 1973 to 1981 until I took voluntary redundancy in order to complete my teaching degree. Containerisation was just emerging and seen as a threat to our jobs. The docks were labour intensive and the work was physically demanding. Thanks to a strong union, the pay was good. It was a mixture of hourly rates and piecework based on tonnage handled. This was often the source of disputes between us and the bosses. Unofficial strikes were common, short-lived and often successful. Little wonder that Thatcher went after the dockers after defeating the miners.

I have recently started writing poetry again after reading How to Grow Your Own Poem. Maggie’s Creatives, a writing workshop based at the Maggie Centre in Manchester, gave me fresh encouragement. Here are two more poems that try to capture the experience of being a dockside labourer all those years ago. In Tea Break I discover vertigo, scrambling up a towering crane while hanging on to a can of scalding tea.

I watch him spoon loose tea into the white
Enamelled billy can, blue trimmed and chipped,
Add boiling water and Carnation milk.
“A proper brew that, dockers’ tea.”

And now to mash it properly he swings
It high above his head. The forces stir,
not spill, hot liquid launched against the cold
And lazy wind from off the sea.

I am the newest in the gang.
“Don’t spill it, mind!” It is my task
To carry can and climb the crane
To give the driver sustenance.

So, grasp the ladder with one hand,
Focus on the next rung up,
Trying that I do not spill the tea
And trying harder that I don’t spill me.

My first ever job on the docks was on a deal boat from Russia, laden high with loose planks or “deals” of pine that were drenched by the Arctic seas and frozen together. Gangs of dockers used our “hawks” to prise them apart and dig down to build a “set” of timber on two chocks of wood. These were stabilised by “laths,” thin slices of wood placed across the set at regular intervals to provide structure and stop it collapsing.

When a load was ready to go the ganger would shout, “Give it a name!” And the hatchway man who could see both the men below and the crane driver up in his cab would give the signal to go. So up it went and then we scrabbled to build another one before the crane returned. The tally man counted each load and that’s how we got paid. Happy days, long gone.

GIVE IT A NAME!

We take our hawks and hook it out.
We build a set upon the deck
With chocks and laths to make it hold
Its form and wrap the wires around.

The crane that hovered like a hawk
Now plunges down to hook its prey.
We hang the wires, stand well back.
“Give it a name!” the ganger cries.

The hatchway man his blessing gives,
To lift the load. It’s wrenched. It’s named!
Its mother lode from which it’s torn
Is maimed and in the wound we drop

With hawks and chocks and laths to build
More sets and send the siblings forth.
Each one, baptised with dockers’ sweat,
Anoints us with its pinewood oil.

At last, when there are no more names,
We haul our splintered flesh ashore.
The tally man, his census keeps.
The empty hold echoes with loss.