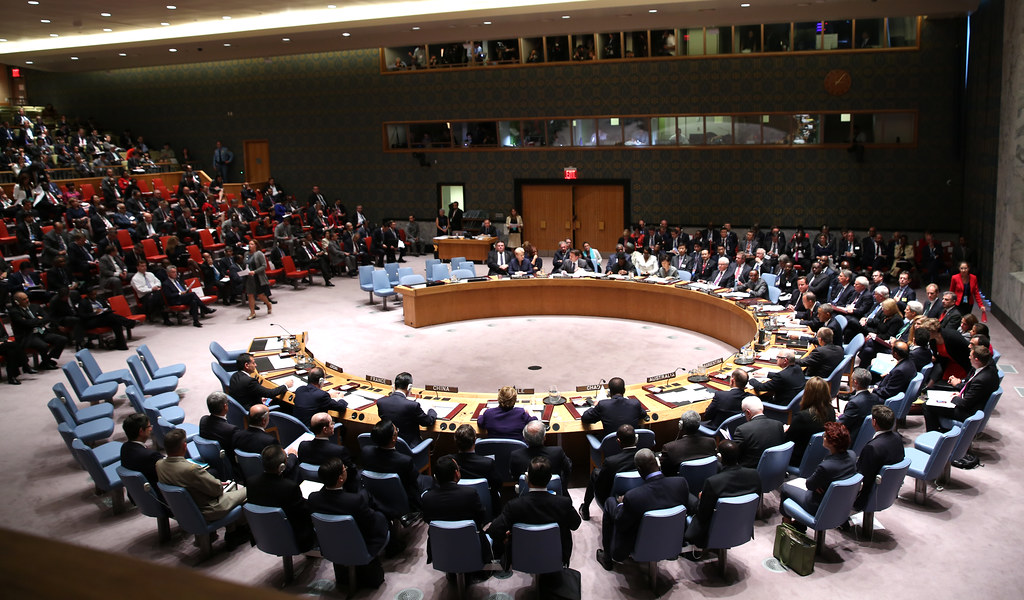 Photo by Paul Kagame from 2014

The United Nations was due to hold two meetings yesterday (Monday) to discuss the Russian invasion of Ukraine, the first a meeting of the 193 member General Council, the second an emergency session of the 15 member Security Council.

The General Assembly will hold a full debate on Monday and Tuesday and then vote on a resolution that US Ambassador Linda Thomas-Greenfield said would “hold Russia to account for its indefensible actions and for its violations of the U.N. Charter”.

The Security Council rarely calls an ’emergency session’, the last one being in 1997 to discuss Israeli actions in East Jerusalem and the occupied territories.

Strangely enough it was the United States, along with Israel, that voted against Resolution 1860, the reason for the last Security Council meeting. Resolution 1860 emphasised:

“…that the Gaza Strip constitutes an integral part of the territory occupied in 1967 and will be a part of the Palestinian state” and then continued that the resolution:

“Stresses the urgency of and calls for an immediate, durable and fully respected ceasefire, leading to the full withdrawal of Israeli forces from Gaza”.

The United States’ justification at that time for vetoing the resolution was that the Palestinians were responsible for Israel’s violation of their rights by supporting Hamas which had repeatedly fired rockets into Israel. The US delegate accused the sponsors of the the General Assembly motion of “sacrificing honesty in favour of a narrow political agenda that exclusively blamed Israel in what had become a favourite political sport”.

Why is this important? Am I not engaging in the ‘whataboutery’ I cautioned against just two days ago? Possibly, but as the racist rhetoric in support of the Ukrainians grows louder, we should remember that the Americans, who will undoubtedly demand any resolution of theirs is adhered to, have a selective memory when it comes to UN resolutions.

For that matter, the UK also has a selective memory. We now know that when Tony Blair was desperate for justification for a war in Iraq and could not get UN approval for one he simply changed the rules so that he no longer needed one. So, what is the UN worth?

On Friday, Russia, a permanent member of the Security Council, vetoed a resolution which called for Russia to “immediately cease its use of force against Ukraine” and “immediately, completely, and unconditionally withdraw  all of  its military forces from the territory of Ukraine within its internationally recognized borders”.

This is rather like having a member of the Krays on the jury as the twins were being tried. There was never a chance that Russia would vote for such a resolution. The entire purpose in proposing it could only be political theatre.

The draft resolution had 11 countries in favour including the United States, the United Kingdom and France, whilst China, in what is being interpreted as a sign of Russia’s international isolation, abstained.

Although what happens at the United Nations will fill headlines and newspaper columns, it is difficult to take it seriously. There have been over 30 resolutions calling for Israeli withdrawal from the occupied territories since 1980, and yet Israel has not only remained firmly in place but encroached further.

It is a shame that the United Nations, with its $3.12 billion annual budget and 40,000 employees, is such a colossal waste of space. The idea that there is an organisation which oversees the conduct of nations is a fine one in theory, but in practice a United Nations resolution has never prevented any country from doing exactly what it wanted to do in the first place.

Whilst there are countries with the obvious power of the US, Russia, UK, China and Israel, the UN remains just another talking shop where might is right. So, whatever the eventual decision of the General Council and Security Council we will have to look elsewhere to see a potential resolution to this conflict.