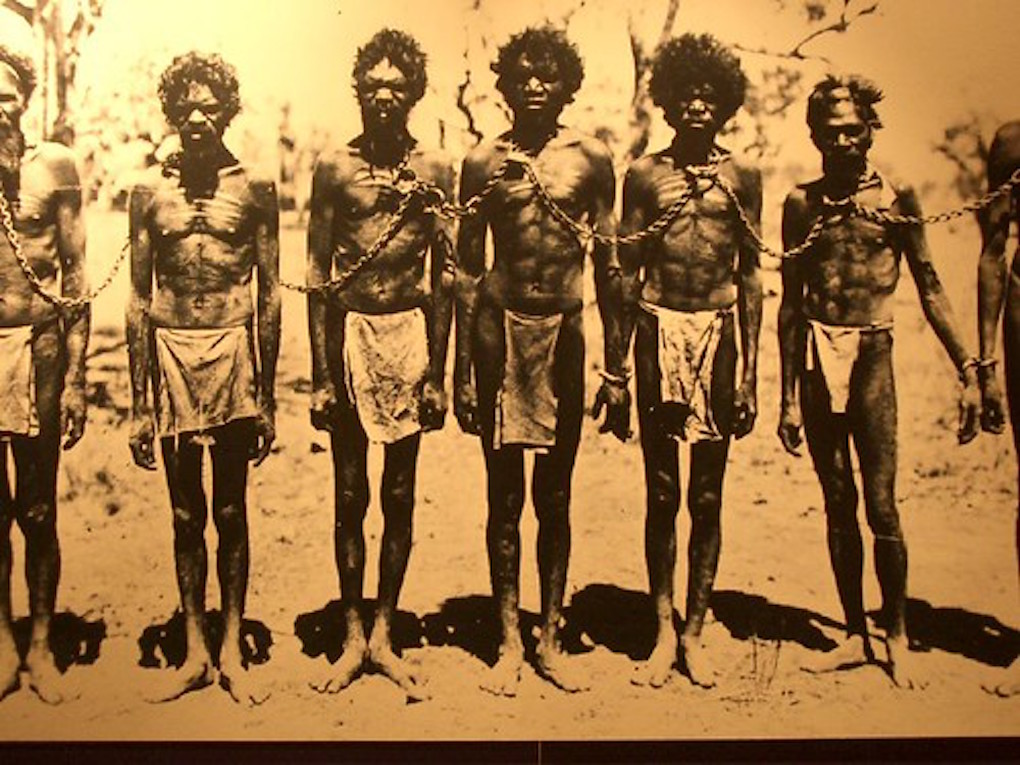 "Aboriginal Slavery" by Choconancy1 is licensed under CC BY-NC-SA 2.0.

WHEN we speak of BLM we tend to focus on the Black people of the USA or the UK, completely ignoring the plight of the Indigenous people of Australia, yet just last year Australia was heavily criticised over its treatment and acknowledgment of First Nations people at the United Nations.

More than 30 nations – including Canada, France, Germany, Italy, Poland and Mexico – called on Australia to raise the age of criminal responsibility from 10 to 14 (Indigenous children make up just seven per cent of the general youth population but 54 per cent of those in youth detention across Australia), in line with the recommendations from the United Nations Committee on the Rights of the Child. Azerbaijan said at the hearing that “racism towards Indigenous people is deep-rooted” in Australia, while Belarus raised concerns that Australia is “dodging its obligations to Indigenous people” and El Salvador urged Australia to “step up your action to promote the Human Rights of Indigenous people”.

It’s not just children. Although Aboriginal and Torres Strait Islander peoples make up just 3.3 per cent of the general population, they account for 28 per cent of the prison population. And deaths in custody are not at all uncommon. Just two examples: Tanya Day, a 55-year-old woman was arrested after a train conductor found her asleep on the service travelling from Bendigo to Melbourne in 2017.

She later died after hitting her head several times while in custody. The coroner found Ms Day was “not treated with dignity and humanity” and the train conductor’s decision to call the police was influenced by “unconscious bias”. The coroner wrote in her findings that Ms Day “was the only sleeping passenger he has ever called police to remove from the train, although he comes across three sleeping passengers a week”. The coroner also noted the same police officers treated Ms Day differently to another severely intoxicated woman they attended to on the very same day who was not Indigenous. She was driven home and was not arrested for being drunk in public.

Another case, in Western Australia, was that of a Ms Dhu who was locked up for not paying $3,622 in fines. She died in hospital two days after her arrest, with a coroner ruling that she had been treated inhumanely. She had had internal injuries due to family violence and the coroner said her medical care had been “deficient”. Police responded by saying they thought she was “faking it”. Following the death of Ms Dhu, Western Australia changed its laws so that fine defaulters were not immediately taken into custody.

But it is not only in this area where Australia falls short in protecting its Indigenous population. They face severe income inequality also. Although Indigenous incomes have increased over the years, particularly in major cities – though about 20 per cent of Aboriginal people in the major cities are still estimated to live in poverty – the situation is much worse in remote areas where more than half the Aboriginal people still live in poverty.

Yet this is simply a continuation of the treatment they have had to tolerate since the arrival of Europeans on their shores. These Europeans quickly came to see the Indigenous people as a nuisance. In theory they were protected as British subjects once English Common Law came into effect when the First Fleet arrived in Australia, but in practice this wasn’t so. Many were shot on sight, either secretly or with weak justification given.

Professor Lyndall Ryan at the University of Newcastle has been mapping massacres against the Aboriginal people, which she has defined as the indiscriminate killing of six or more undefended people. She has identified more than 170 massacres of Aboriginal people in eastern Australia and six recorded massacres of colonists between 1794 and 1872.

“Sometimes Aboriginal waterholes were poisoned, or Aboriginal people given flour, sugar or damper mixed with arsenic. These practices, common last century, continued into the first half of (the 1900s) in some parts of Australia,” she said. While a study by Ann McGrath into the Northern Territory cattle industry found “flogging an Aboriginal was considered trivial”.

Farmers argued that the standards applied to European employees were out of place when dealing with Aboriginal workers. Some weren’t paid, or paid very little and treated poorly. “They maintained that Aborigines did not have the same needs as European workers, that they could not understand the value of money and did not behave rationally,” a human rights report stated.

And Indigenous women had a lot more to fear as they were seen by White settlers as ‘easy game’. On many cattle or sheep stations there were no Aboriginal women at all, but, on those where there were, they were usually at the mercy of anybody, from the owner or manager, to the stockmen, cook, or roustabout. For these women, who had grown up in their own culture where they were equal to men, it must have been a terrifying time.

Although slavery was outlawed in 1833, it continued in Australia until the 1960s, with Aboriginal people of all ages being taken from their homes and sent to work on cattle and sheep stations all across Australia. Most shocking is that, until the late 1950s, as many of us were sitting down with our families to watch this new invention called television, neck chains were still being used on the Indigenous people, both to prevent them leaving their ‘place of work’ and to keep them submissive.

The chains may have gone, but the systematic racism persists.