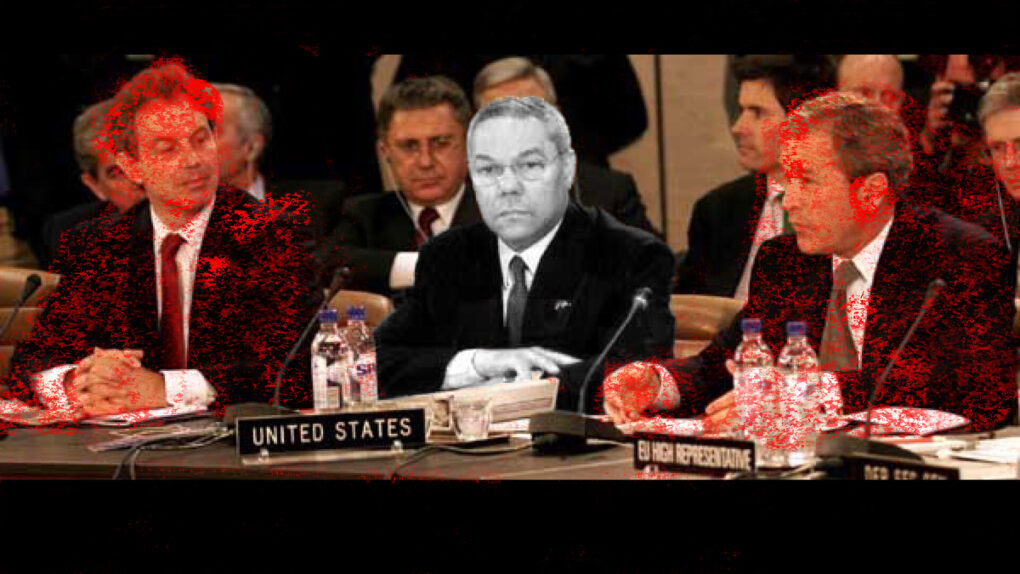 The US President, Joe Biden praised Colin Powell (5 April 1937 – 18 October 2021) on his passing, saying of him ‘[He was] a dear friend and patriot of unmatched honor and dignity’.

It seems the whole of the Western world’s elite, particularly the political elite, queued up to give the departed Powell the send-off of a hero.

Colin Powell will be remembered for many reasons. Some will never be able to forget him. They will be reminded of those that brought the direct deaths of over 200,000 civilians every time they visit the graves of loved ones who lost their lives in a war that was based on lies.

However, the fond memories of the man and wonderful rhetoric of the truly positive things he did are grabbing the headlines today.

Does any of the talking up of ‘positive achievements’ matter if the man in question lied to the assembled world in order to allow a superpower to raze a country to the ground? What does it say about him and the country he served?

Who was Colin Powell?

Colin Powell, son of Jamaican immigrants was born in Harlem, NYC. He was educated in New York City public schools and ultimately graduated from the City College of New York.

He was a member of the ROTC whilst in college. This led to a commission as an Army second lieutenant upon his graduation.

He had a 35-year career with the army which ultimately, led to a monumental triple first. He became the 12th Chairman of the Joint Chiefs of Staff, the highest military position in the US Department of Defense, aged only 52.

He was a high flyer!

It was in his political life where Powell would really break the glass ceiling by becoming America’s first Black secretary of state.

It was also as secretary of state where he would make a decision which would assist in changing the world forever.

Within days of the attacks on the US on 11th September 2001, the Bush administration very quickly concluded that Iraq was involved and a military response was called for. This was in spite of the intelligence community’s unequivocal conclusion that Iraq had nothing to do with either the 9/11 attacks or al-Qaeda.

As secretary of state, Powell was the face of the Bush administration’s attempt to get the world community to back an invasion of Iraq. To do this would require the use of false claims of Iraq’s possession of weapons of mass destruction.

This was all in aid of legitimising Bush’s lust to invade Iraq, despite their compliance with the international communities demands they verifiably dismantle their previous attempts at manufacturing and acquiring weapons of mass destruction.

In spite of personal disagreement with the policy and knowledge that ‘evidence’ was false, Powell appeared before the UN security council and asserted that ‘there can be no doubt that Saddam Hussein has biological weapons and the capability to rapidly produce more, many more’.

He said his intelligence was based in part on accounts of unidentified Iraqi defectors, one of whom, codenamed Curveball, later admitted nearly every word they had told the intelligence services was a lie.

The invasion went ahead without UN authorisation. However, Powell had done his job. This managed performance at the UN held off the serious effort to prevent a war by politicians dubious of the spin coming from the offices of the premiers of the ‘coalition’ and by those protesting in their hundreds of thousands in major capital cities across the globe.

With the gift of hindsight, we know how this played out. We know only too well, it led to a horrid, terrifying and barbaric period of history which has lasted for 20 years.

What’s the answer to the questions?

There can be no doubt that Colin Powell was a ‘moderate’ in amongst right-wing evangelicals who were looking to make the US a theocratic hegemony.

As a soldier, he developed a doctrine that was more cautious in terms of using the military at all than any of his predecessors.

As a civilian, he was a role model for many, not least of whom are from the Black community. He took this role seriously and fought for all immigrants of all colours and backgrounds, never forgetting where his family had come from.

However, all of us, whether the secretary of state, an Uber driver or some schmuck who’s lucky enough to write for first-class news and opinion magazine, tend to be remembered for the things we do closest to our deaths.

If that thing happens to be lying to the world on the biggest of public stages in order for your boss to wage a war against the man his Daddy really doesn’t like, leading to the deaths of hundreds of thousands of innocents, well, that’s your legacy.

What about Bush, Cheney et al?

It would be remiss to not talk about the actual harbingers of these 20 years of death.

The Bush administration was more than happy to use the anguish of their nation to get the revenge that Bush junior so wanted for his Father.

There was no consideration of the further loss of life, for their own citizens in the shape of those they sent into harm’s way. It should come as no surprise there was no thought for the innocents who didn’t yet know they had been targeted for death.

This period of time also led to the creation of the Authorization for Use of Military Force Against Iraq, or AUMF as it is more commonly known.

This authorised the use of the United States Armed Forces against Saddam Hussein’s Iraq government. However, despite the ‘completion’ of Operation Iraqi Freedom, it is still the law 20 years later.

This gives a US president the authorisation to use the Armed Forces of the United States ‘as he determines to be necessary and appropriate’. Whatever they see fit despite any human cost or notion of morality!

And they have used that power. In Obama’s last year alone U.S. forces dropped over 26,000 bombs on seven different countries.

Today we mark the death of a statesman. But his knowing participation in misleading the world and the subsequent multiple, terrible outcomes for the world mean that his reputation has also died.

And the nation he served, that is so invested in telling everyone else that we shouldn’t ‘step on their freedom’, how their founding fathers fought for that freedom and who defend it by trampling other peoples’ freedom into the dust? In the most charitable way it can be put, any credibility they had has died too.