De Klerk, Mandela, and the ANC 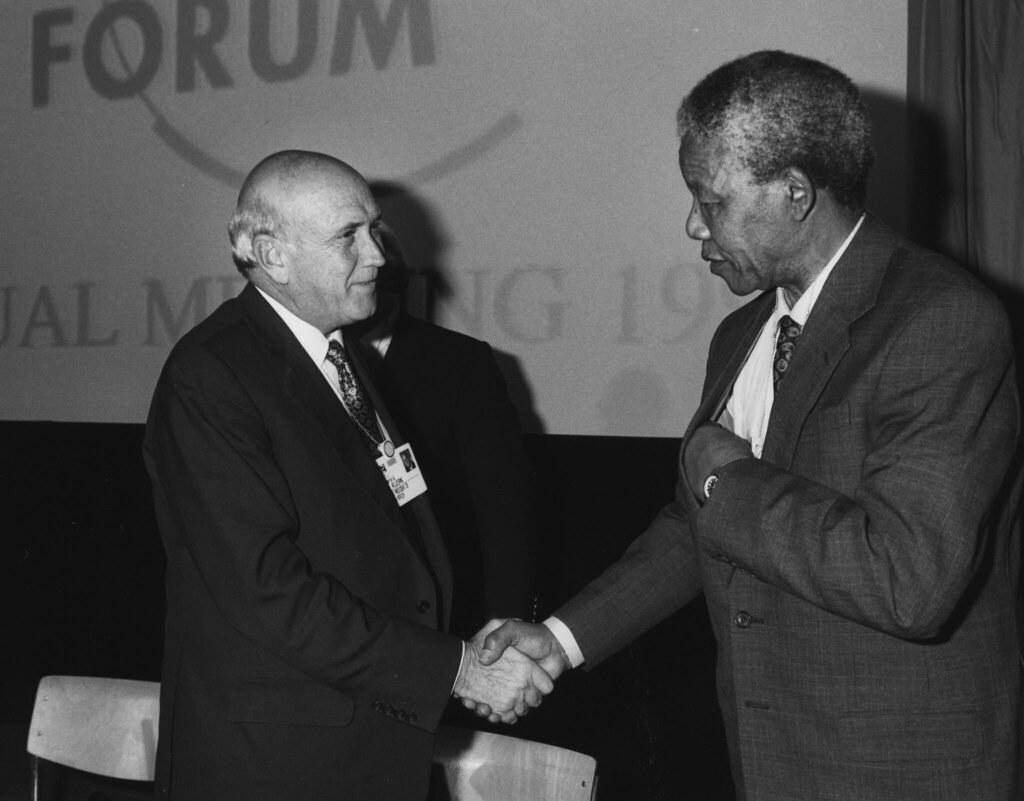 SOUTH AFRICA’S last White president died yesterday at the age of 85. A spokesman for the F.W. de Klerk Foundation stated he died at his home in Fresnaye, Cape Town after a battle with cancer. FW (Frederik Willem) de Klerk headed South Africa’s White minority government from 1989 until 1994, when Nelson Mandela’s African National Congress (ANC) party came to power – marking the end of apartheid.

Yet although he shared a Nobel Peace Prize with Nelson Mandela, whom he freed from prison in 1990, de Klerk was reviled by many: by White South Africans who saw his efforts to end apartheid as a betrayal and by Black South Africans for the violence perpetuated under his presidency. He did, however, lift the ban on the ANC a year after being elected president in 1989. Although while he publicly apologised for apartheid’s harmful effects in 1993 he never apologised for apartheid itself.

The ANC had been banned from 1960 to 1990 by the White South African government – largely due to the more militant stance it took after 1952 which saw protests, strikes and boycotts against the  apartheid policies which had been introduced by the National Party government which came to power in 1948 – but during these three decades the ANC operated both underground and outside South African territory.

Although of course White-minority rule and racial segregation were already in existence in South Africa with non-Whites having no right to vote and segregation commonplace, apartheid intensified under the National Party with harsh penalties for non-Whites entering into areas designated for Whites-only without having a pass, showing their employment status, enabling them to do so (which became known as the pass laws), interracial marriage and sexual relationships were illegal and punishable offences, and Black people faced significant restrictions on property rights.

It was in 1960, however, when the Pan-Africanist Congress (PAC), which had broken away from the ANC in 1959, organised huge demonstrations against the pass laws during which police killed 69 unarmed demonstrators at Sharpeville (south of Johannesburg) that the National Party banned both the ANC and the PAC. With legal avenues denied to them an ANC military organisation, Umkhonto we Sizwe (Spear of the Nation), with Mandela leading, was formed in 1961 to carry out acts of sabotage as part of its campaign against apartheid. Mandela and seven other ANC leaders were convicted and sentenced to life imprisonment in 1964 (the Rivonia Trial).

Nelson Mandela, speaking at his trial

Mandela’s speech from the dock during this trial, during which he said “I have fought against White domination, and I have fought against Black domination. I have cherished the ideal of a democratic and free society in which all persons live together in harmony and with equal opportunities. It is an ideal which I hope to live for and to achieve. But if needs be, it is an ideal for which I am prepared to die” is still remembered today.

The ANC, with Mandela at the helm, a man who had fought and been imprisoned for wanting an end to apartheid, and a man who promised in 1997 that South Africa would avoid the “formation of predatory elites that thrive on the basis of looting national wealth and the entrenchment of corruption” had strong support, but since his death in 2013 the party has been beset by allegations of corruption against senior officials such as former President Jacob Zuma, amongst other elected representatives. This, combined with a failing school system, endemic unemployment, and violent crime has seen the erosion of what was once almost universal support for the party amongst Black South Africans.

It was only last week which saw the party’s worst election outcome since taking power, taking only 46% of the vote. Voters are punishing the party for repeated corruption scandals and poor basic services in areas which have traditionally been ANC strongholds.

The ANC’s vote share has consistently dropped in local elections as voters often use these as an opportunity to lodge ‘protest votes’, but the unexpectedly large drop at these elections is a blow to President Cyril Ramaphosa, who became party leader in 2017 and who will face a leadership contest late next year.

ANC officials acknowledged the latest result was a message from voters that the party needed to “shape up” with the party’s Deputy Secretary General Jessie Duarte saying “It is an unambiguous signal to the ANC from the electorate … people are disappointed in the ANC”.

Although the South Africa of today is dramatically different to the country which Mandela took presidency of in 1994, many of its Black citizens have come to realise that true citizenship means taking on the ANC. For them, the party has come to represent a heartless government whose police evict them from what is already cramped and substandard housing, shut off their water, lock them up or even murder them when they protest. The latest election results show that a majority are disillusioned.

While de Klerk did, along with Mandela, bring a semblance of peace and an end to apartheid in South Africa, it is unlikely many, other than those who knew the man personally and who often describe him as honest, intelligent and open-minded, will mourn him, but the man who helped in the fight against racial segregation, should be mourned, not as a ‘great’ man, but as a man who played a part in ending apartheid.

If those of you who read my articles could donate just £1 each it would go a long way in helping me survice. Thank you. You can do so at https://www.paypal.me/susiejgranic