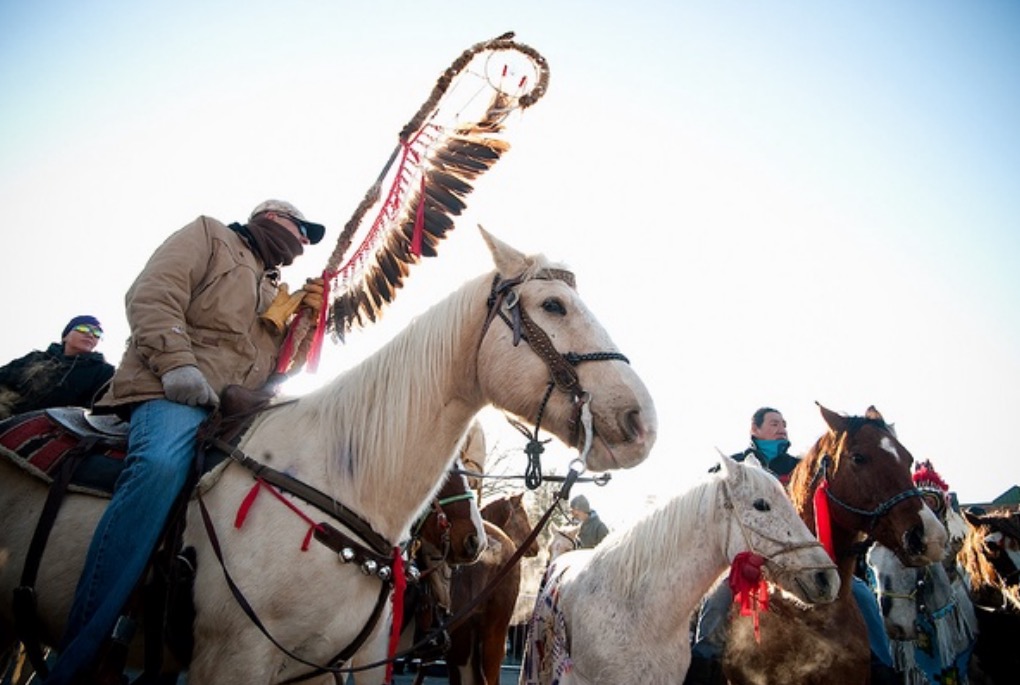 Dakota 38 ceremony” by The UpTake is licensed under CC BY-NC-ND 2.0

ON 9 December riders from around the world assemble with the Oceti Sakowin (7 Council Fires), people you might call Sioux, at Lower Brule, South Dakota. The following day they will begin a ride of 330 miles to arrive in Mankota, Minnesota on 26 December – the anniversary of the greatest mass execution in American history

For the last few years I’ve tweeted daily during the 16 days of the ride and I encourage people to spare some time to watch this documentary of the first Memorial Ride, you won’t regret it! The closing credits include the names of the 38 who were hanged, sadly some of the participants had died before the film was released. The producers say:

“This film was created in line with Native healing practices. In honoring this ceremony, we are screening and distributing ‘Dakota 38’ as a gift rather than for sale”

I want to make it plain that those executed were prisoners of war, not terrorists. Indigenous Water Protectors are treated as such even now. Abraham Lincoln, shortly after signing the bill abolishing slavery, consented to the verdict of a military court. He wanted to limit those executed to those who had violated women; there were only two, not enough to satisfy settlers who threatened to take matters into their own hands. I don’t want to absolve Lincoln entirely, but I can’t blame him very much either – he was fighting a civil war which was going badly at that time and didn’t need the distraction of dissident generals!

On October 11, 2020, protesters in Portland, Oregon tore down a statue of Abraham Lincoln during a protest called the Indigenous Peoples Day of Rage Against Colonialism, organised in opposition to the nationally observed Columbus Day holiday on October 12. The World Socialist Web Site condemns this act as a  racialist falsification of history which ignores the 265 who were sentenced but granted clemency. Significantly, no social demands were put forward by the protesters who make no reference to much-needed jobs, hospitals, housing, or health care for Native peoples. It was in sharp contrast to the spirit of the ride.

He had a dream

In the spring of 2005, Jim Miller, a Vietnam veteran and a descendent of the Dakotas who where displaced after the event, dreamt of a  series of horseback rides which would bring the Dakota people together, raise awareness of the significant impact it still has, and bring reconciliation among all people of the region so they might move forward and live in harmony. For Jim Miller personally, it was an act of atonement for the 38 Vietnamese he had killed during his military service. The first ride took place in December 2009 and many non-indigenous people provided food and shelter for the riders and their horses.

In the decade before the Civil War an estimated 150,000 American settlers had moved into Dakota territory and over 7,000 Dakota Sioux were confined to a tiny reservation on a narrow strip of land along the Minnesota River. They were no longer able to fully support themselves in their traditional manner and were dependent for their survival on goods and annuity payments promised in treaties with the federal government. Corrupt federal agents and traders would cheat them out of their money. Andrew Myrick, a trader at the Lower Agency, famously expressed the attitude of many American settlers at the remarking, “so far as I’m concerned, let them eat grass.”

On August 17, 1862, four Dakota men who were returning from a hunting expedition killed five white settlers in Acton, Minnesota. Dakota leaders met and decided to go on the offensive. What followed was six weeks of fighting in the bloodiest conflict between Native American and American settlers since the colonial period. Well over 600 white settlers, an estimated 200 soldiers, and as many as 300 Dakota died in the conflict.

Confronted with the combined force of the US military and citizen militia, and facing diminished support for the war among their own ranks, the Dakota surrendered on September 23. American troops rounded up thousands of Dakota soldiers as well as hundreds of men, women, and children who had nothing to do with the conflict. Soldiers burned crops, destroyed homes, and placed the Dakota Sioux into barbaric internment camps. Approximately 1,500 Dakota men, women and children were taken into custody. Almost immediately, the military carried out show trials to condemn hundreds of them to death.

Lincoln and his aides painstakingly reviewed the trial transcripts. They discovered a lack of incriminating evidence against most of the accused. The commissioners who had handed down the mass sentences were the very military officials who fought in the war against the Dakota. Under these circumstances, an objective and unbiased verdict was impossible. It became clear that the military and settlers intended to drive all Dakota from Minnesota.

We can’t blame the wasi’chus [greedy person] anymore. We’re doing it to ourselves. We’re selling drugs. We’re killing our own people. That’s what ths ride is about, is healing.

Jim Miller knew nothing of this when he had his dream; he tried to ignore it but it persisted. He says:

“When you have dreams, you know when they come from the Creator. As any recovered alcoholic, I made believe that I didn’t get it. I tried to put it out of my mind, yet it’s one of those dreams that bothers you night and day. We can’t blame the wasi’chus [greedy person] anymore. We’re doing it to ourselves. We’re selling drugs. We’re killing our own people. That’s what this ride is about, is healing.”

A year after the execution of the 38, Sitting Bull rode to see the concentration camps in South Dakota. He said that his people were housed worse than animals. Miller believes that Sitting Bull and Crazy Horse were present on the journey and the film shows a riderless horse which Miller offered as their mount. The horse has spiritual significance for the Dakota.