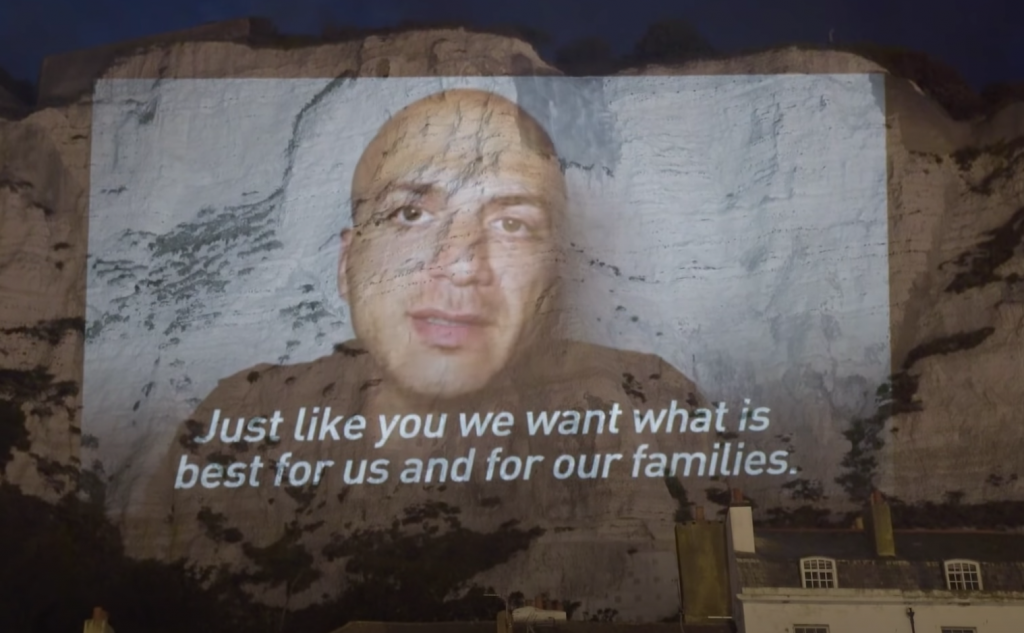 Hassan, an asylum seeker, projected on to Dover Cliffs in a video by Led By Donkeys (https://www.youtube.com/watch?v=fwt7ODBwhcQ)

JUST a day after UK Prime Minister Rishi Sunak announced tougher requirements for those seeking asylum, four people died when a small dinghy capsized in the English Channel. Suella Braverman, who previously claimed what she termed ‘illegal immigration’ was “out of control”, said, “These are the days that we dread”. But, aren’t they the days that you have been working to promote? We cannot recall Ms Braverman disagreeing with Tory MP Marco Longhi when he claimed, without a scrap of evidence, that it “…is patently obvious that most asylum seekers, or claimants of ‘modern slavery’ are not genuine.” And he knew that how exactly?

Mr Sunak said in response to yesterday’s tragedy that it was a “tragic loss of human life”, but immediately used the deaths to continue his, and most of Westminster’s, war on desperate people. His response is not to blame the illegal wars the UK either starts or supports but rather to blame those getting in the boats. All this, of course, is prompted by a desire to be seen to be tough. Tough on asylum seekers but tougher than Labour claims that they will keep out more ‘illegal immigrants’ than the Tories. Let us not forget Yvette Cooper’s speech to Labour Conference in which she promised a Labour government would “make sure the immigration system is fair, firm and properly managed.” She then pledged to work with France to stop the flow of small boat crossings, a policy subsequently adopted by the Tories.

International law is very clear on the rights of asylum seekers:

“We reaffirm respect for the institution of asylum and the right to seek asylum. We reaffirm also respect for and adherence to the fundamental principle of non-refoulement in accordance with international refugee law.” (1951 Convention relating to the Status of Refugees and the 1967 Protocol)

Non-refoulement means states are prohibited from returning refugees in any manner whatsoever to countries or territories in which their lives or freedom may be threatened on account of their race, religion, nationality, membership of a particular social group or political opinion. We have searched thoroughly and nowhere is there an amendment to this legally binding international agreement that says the British government have the right to decide who is or is not threatened, if they feel doing so could garner them a few more votes.

Blaming asylum seekers in a desperate attempt to be tougher than your electoral opponents is the worst kind of opportunism. Putting barriers in the way of asylum seekers’ legitimate right to seek asylum is playing into the hands of traffickers who, whatever their motivation, are providing a service that is clearly needed. Asylum seekers are caught in a nowhere land between countries that they cannot return to and the political opportunism of the Sunaks and Starmers who use their plight as a political football.

The only way to stem the flow of refugees is to prevent the circumstances which drive them to take such a perilous journey in the first place. But that would mean regarding them as desperate human beings who need our help. A moral task that seems beyond either Tory or Labour politicians.