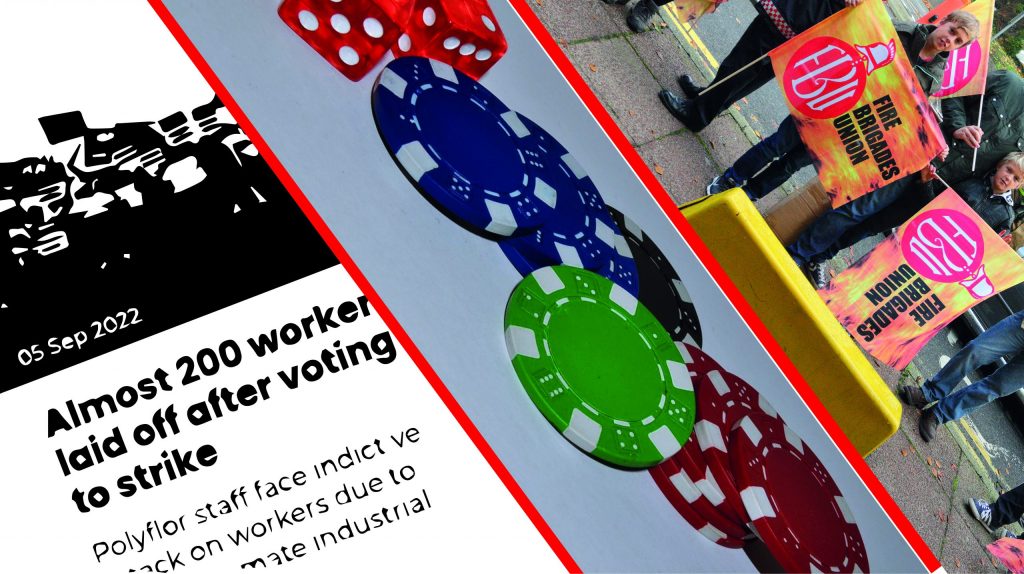 FIREFIGHTERS are the latest group of workers to say ‘Enough is Enough’ as they begin balloting for strike action over pay and conditions. On 27th June firefighters were offered a paltry 2% pay rise. With inflation now topping 10%, and set to rise further, this represents a real term pay cut for those doing a job where official statistics show that an average of two firefighters die protecting us every year.

New Tory Prime Minister Liz Truss has made clear her contempt for workers with her promise to prevent public sector workers from taking strike action. In July, as RMT strikers were preparing to strike over pay and conditions, she pledged that once PM she would clamp down on the ability of trade unions to “paralyse the economy”. A pledge that brought an instant response from RMT leader Mick Lynch.

The Government is gambling that for most people trade unions are more of a nuisance than a help. Whilst the Tory faithful will always support anti-union laws, the gamble is that preventing workers with legitimate concerns from taking action will have the support of many voters who are either not trade unionists or see union action only when it directly affects them.

The gamble is not paying off so far, as Unite the Union announced this week that workers at London Grosvenor Casinos, not perhaps a group of workers renowned for their militancy, will be taking strike action for 72 hours commencing this coming Friday. 150 workers, employed across the sector in London, voted by 91% to reject the offer of a bonus of between £600-800 rather than the substantial pay rise they were looking for. The company meanwhile posted profits of £74 million. It is hard not to agree with Unite General Secretary Sharon Graham: “Here we go again: Grosvenor Casinos is another big money company that is raking it in but refusing to pay its workers a wage that they can live on. It’s just not acceptable.”

There is no doubt that there is a mix of fear and anger amongst ordinary workers who are seeing their living standards slashed. The Critical Mass shopping basket of 14 budget items has risen 13.2% since May and rises on this scale are fuelling the anger that is producing an unprecedented fight back. On the other hand bosses, spurred on by the government and their media, continue to think they can intimidate workers to suffer whilst they make more and more for themselves.

200 workers due to take strike action today at Polyflor Ltd, in Manchester, a manufacturer of vinyl floor coverings who voted to take strike action after the company, which handed £24 million to shareholders, refused a pay rise. Following the successful ballot, the company has told all those who take action that they will not have jobs when they return. As GMB Regional Organiser Stephen Boden said: “This looks like a vindictive attack on workers due to take legitimate industrial action over pay.”

Gimmicks from the new PM will not solve the crisis that now confronts governments across the capitalist world. This is no longer about oil shortages caused by a war or about prices spiralling out of control because of excessive wage demands. What we are seeing is a system that has become used to making huge profits without being prepared to share those profits with their workforce. What we are witnessing is workers saying ‘enough is enough’ and demanding their fair share of the cake rather than just crumbs from the table.