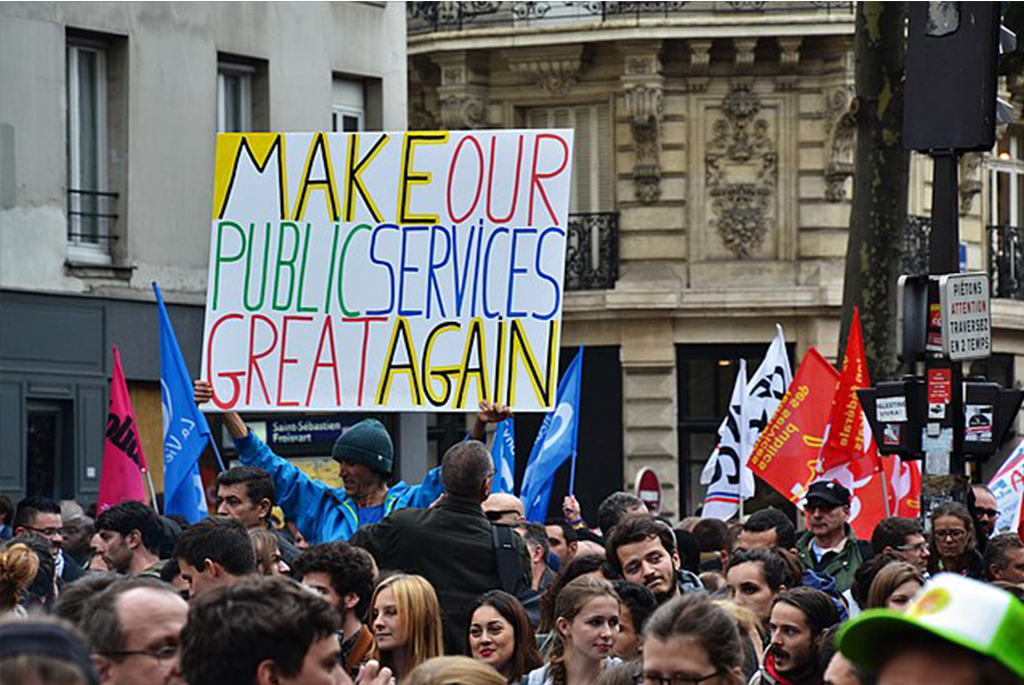 French civil servants send a message to their government.

The government has confirmed that 91,000 civil servants are facing the sack. Government ministers have all been emailed by Rishi Sunak and Johnson’s chief of staff, Steve Barclay. As we reported in Critical Mass Mag, after Johnson made the initial announcement in a press interview, the government is seeking 20% cuts across the board. But departments are being asked to consider much bigger cuts of 30% and 40% because not all departments will be able to deliver the required 20% and others will have to make up the shortfall. They have a month to report, and all plans are to be finalised by the autumn.

This is a recipe for divide and rule. Instead of challenging the cuts, ministers will be pleading that their department is a special case and for the axe to fall elsewhere. Yesterday, the Met Office were quick off the mark to respond. A 20% cut would reduce its staffing to the lowest level since the Second World War, at a time of increasing climate uncertainty, when we need to be able to accurately forecast the impact on our weather.

Expect the Passport Office, DVLA and Criminal Justice, all of whom are already mired in delays and waiting lists, to join the clamour.

The Tories want to reduce staff to levels in 2016. They forget that since then we have had to expand the civil service to take over roles previously outsourced to the EU. And there are new demands for border controls and customs posts that we did not need in the single market, alongside increased staffing to negotiate trade deals around the world.

In another letter Johnson has written to all civil servants to tell them that, now the pandemic is over, we no longer need such a large state and civil servants’ jobs must go, despite the fact that in March, Margaret Harris of the World Health Organisation told a press conference that it was “far from over”. “We are definitely in the middle of the pandemic,” she added. The supposed end of the pandemic will come as news to the grossly understaffed public health officials who were side-lined by a government which preferred to hand out massive contracts to the private sector. It will also come as a surprise to the families of more than 300 people who died from Covid last week.

As we saw during the worst of the Covid pandemic (which is clearly not over yet), slashing the state during the last crisis in the name of austerity did not remove the needs the state is supposed to cater for. And, when Covid revealed that a hollowed-out state did not have the infrastructure to meet our needs, billions were wasted on hasty and ill-conceived contracts handed out to the private sector. Remember Track and Trace?

Johnson also argues that big government is a drain on the economic recovery that is needed to combat the cost-of-living crisis. Hence, we need to cut the civil service. The argument is that we need to cut jobs in the public sector to help the poorest. But this is not only a bad argument, it is utterly incoherent and yet another Johnson lie. There is no evidence that any savings from these job losses will find its way into the pockets of the poorest in society. As we saw during the Covid crisis, money flowed very easily from government to their friends. If we really want to save money, perhaps we could start by abolishing the monarchy and saving £345 million a year there. Or perhaps, if the rich paid their fair share of taxes, we would get back the £34 billion a year that HMRC reckon they do not manage to collect each year. Or maybe the £3.4 billion spent on nuclear weapons could help to keep people in work.

We need more government, not less, if we are to ensure that those suffering now get the help they need. And long term we need a plan for food and energy security that cannot be left to the private sector capitalists who are profiting from the current crisis.

New crises are inevitable, given the instability of the world economy, geopolitical power struggles and the overarching climate catastrophe that threatens us all. Slashing the state may play well with the Tory right and their cheerleaders in the media. It does nothing to address the needs of society.

This is just another ideological attack. It is not about money or efficiency. They will hand out billions to privatise services rather than run them effectively for our benefit. And, if they get away with doing this to the Civil Service, they will be coming for the NHS next with renewed zeal.

Civil Service unions have to make a united stand and not fall for Johnson’s lies or his divide and rule tactics. And the rest of us should back them to hilt. This is an attack on the services we rely on and an attack on one of the remaining bastions of trade union strength. 40 years ago, Thatcher went for the miners, the dockers, the printworkers – the best organised sections of the working class and a divided movement allowed her to succeed.