What Christmas Means To Me 6 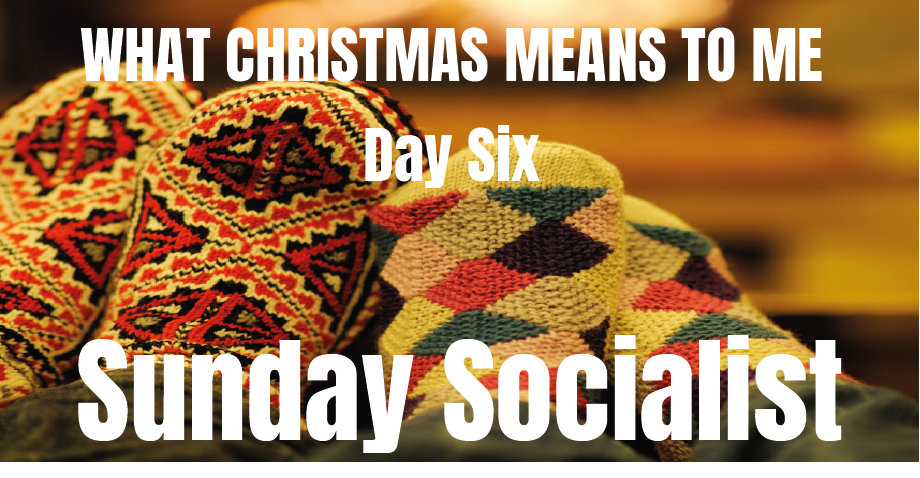 I am not a Christian. I find excessive consumerism dispiriting, but herein lies the contradiction. I really like Christmas.

Growing up in post-war South Wales, life was lived in monochrome. We had very little. However, we always had what I perceived to be memorable Christmases. I would watch my father throughout the year put money into the small, redundant toffee tin, carefully entitled ‘Christmas’. I knew that I would never be disappointed. The high spot was always the stocking. Not a fancy knitted one, but one of my mother’s nylon stockings. She was a tall woman, and it would snake its way around the bedroom door, filled with the most unusual little gifts, the toe stuffed with the ubiquitous tangerine.

We had a large extended family, so there was always a party on Christmas night. Maybe my memory has been distorted, but I don’t recall any animosity. My childhood memories around Christmas were always positive. It was a truly magical and exciting time. Christmas continued to have a special meaning in adulthood, as my youngest son was born in a London hospital on Christmas Day.

That was the only Christmas I spent away from what I continued to call ‘home’. As a young woman, having moved to London, newly married and with two children and two large dogs in tow, we would continue to land on my parents for five days over Christmas.  Their small house was crammed. The old fashioned sideboard would be carefully set out with sweets and nuts. The horrible fake Christmas tree, with the tattered fairy on the top would be the centre piece. Again, I just remember the closeness of family, laughter, and fun.

Most of my Christmases continued to be spent in South Wales. When my father died and my mother became too old, other family members carried the burden of meeting increasing expectations. It is, therefore, only in the last few years that I fully realise what Christmas means in terms of cost, hard work and the responsibility of trying to create those same memories for the younger generations.

More importantly, I am more aware than ever how the marketing of the idealised family Christmas is so out of step with the reality for many. This is particularly the case in a Britain riven with inequality. The number of children living in poverty has increased exponentially under the Tories. Parents become victims of loan sharks in order to ensure that their children do not feel ‘different’, having been bombarded with TV adverts from the start of November. Children of separated and divorced parents find themselves caught in the middle of the Christmas tussle, with some children being driven hundreds of miles on Christmas Day for a motorway changeover. For those living alone, or for any of the 250,000 homeless people, the contradiction between their lives and the capitalist myth is even more stark.

So, saying “I like Christmas”  has many caveats. Yes, I cannot deny my positive memories, but neither can I pretend that this time of the year is anything more than a manufactured Christian myth. It is a myth that draws attention to increasing inequalities, encourages overspending and throws a spotlight on loneliness and poverty. My personal experience is certainly not in step with the political reality. However, that myth is too deeply embedded to change. It will remain my guilty secret.