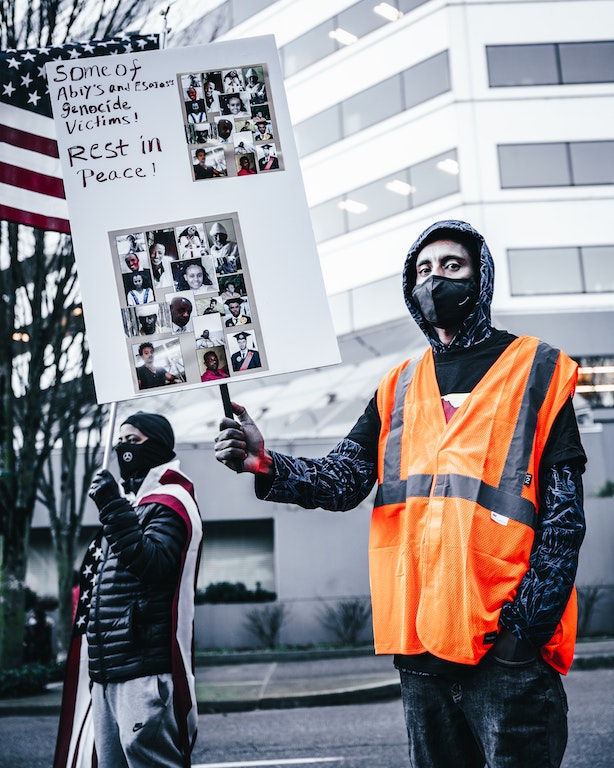 Protesting against the killing in Tigray by Brett Sayles

AS THE world has focused its attention on the war in Ukraine, an equally brutal conflict has been taking place in Tigray. It has been estimated that the two-year-old conflict has led to more than 500,000 people dying from war and famine.

Researchers from Belgium estimate that there have been between 50,000 and 100,000 victims of direct killings, between 150,000 and 200,000 deaths from starvation, and more than 100,000 additional deaths caused by a lack of health care, as about 80% of the medical facilities have been destroyed.

In addition to these deaths, the war is responsible for a humanitarian crisis. Since the outbreak of armed conflict in November 2020, hundreds of thousands of Tigrayans living in Western Tigray have been displaced from their homes through threats, intimidation, and a campaign of violence and forcible removal. This has led some to accuse the Ethiopian Government of engaging in ’ethnic cleansing’.

A report conducted by Amnesty International and Human Rights Watch found evidence of widespread and systematic attacks against the Tigrayan civilian population which amount to crimes against humanity as well as war crimes. These crimes include murder, enforced disappearances, torture, deportation or forcible transfer, rape, sexual slavery and other sexual violence, persecution, unlawful imprisonment, possible extermination, and other inhumane acts.

The conflict stems from grievances dating back to when the Tigray People’s Liberation Front (TPLF), a rebel movement-turned-political party, dominated Ethiopia’s ruling coalition, which it did until 2018. The party lost power at the national level after falling out with the Government led by Prime Minister Abiy Ahmed but continued to dominate its northern stronghold. The Ethiopian Government has claimed that the TPLF is trying to take back power at a national level from its stronghold in Northern Ethiopia, a claim the TPLF has strongly denied.

There is concern that the war in Ukraine has undermined efforts to highlight the humanitarian crisis unfolding in regions of Africa and the Middle East. Many of the most horrific crises, from Mozambique to Yemen, are in remote regions or countries where access is difficult.

“We are seeing clear evidence of this war draining resources and attention from other trouble spots in desperate need,” United Nations Secretary-General Antonio Guterres told journalists this week, referring to the war in Ukraine.

The peace talks are sponsored by the African Union and are being held in South Africa until Sunday. The African Union said its chairman, Moussa Faki Mahamat, was “encouraged by the early demonstration of commitment to peace by the parties,” which comes as the Tigray rebels have been losing ground. This has fuelled fear of further atrocities as Ethiopian troops, supported by neighbouring Eritrea, overrun the areas previously held by the Tigray rebels.