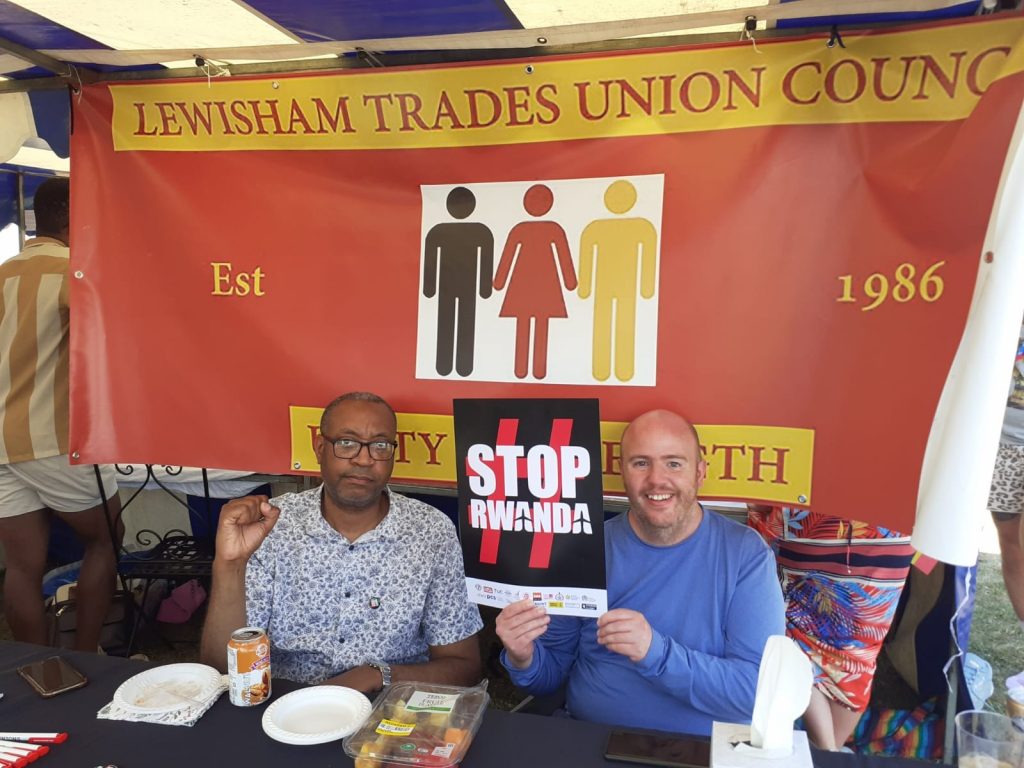 #StopRwanda courtesy of Stand Up To Racism

FOLLOWING a day of action last Saturday, Stand Up To Racism, Care4Calais, the TUC and a number of unions and campaigning organisations are building a Twitter storm to take place today from 11 am with the hashtag #StopRwanda.

The day of action is being accompanied by a workplace day of action in opposition to the Government’s plans to deport asylum seekers to Rwanda in contravention of international law. The court hearing to assess the legality of the case has now been postponed.

Mark Serwotka, PCS union general secretary, said
“It’s time for the government to show humanity to the people who come to our shores for refuge, and to start to engage seriously with sorting out the asylum system so refugees are treated fairly and according to the law.”

Better still it’s time the UK stopped involving itself in foreign wars which create huge numbers of refugees we then turn our backs on. Whilst Wilf Sullivan, TUC Race Equality Officer, said: “Most people believe that we should offer refuge to those fleeing war and persecution,” recent polling from Savanta COMRES also suggests that over two-fifths supported the Rwandan plan.

The fact is that the Government is not as out of touch with the British electorate as many of us would like to believe. Immigration generally, and refugee rights specifically, remain vote winners for the Tories. And they know it, which is why none of the leadership candidates will do anything but support the current plan.

Weyman Bennett, co-convenor of Stand Up To Racism, makes the point that the legislation currently going through Parliament will make it even harder for refugees to find a safe place in the UK.

“The act’s assertion of a two tier system that defines anyone arriving via ‘illegal’ routes, which is the vast majority, as undeserving refugees and removes their right to asylum, represents a step change and full scale assault. As many charities and organisations have pointed out, it is in breach of international human rights law.“

After today’s Twitterstorm, which Critical Mass fully supports, the campaign will move on the Royal Courts in London on September 5th. This is the date when the court considering the legality of the Rwandan deportations will reconvence. When it does, the StopRwanda campaign will be there with a major rally planned for 1 pm that day.