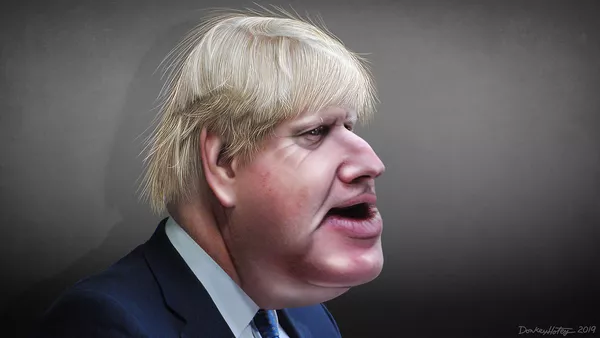 Boris Johnson - Caricature by DonkeyHotey This image was marked with a CC BY 2.0 license:

THE UK is surely witnessing the dying hours of the Boris Johnson premiership? After months of revelations about his lies and rule-breaking, something has finally snapped in the Tory party. The penny has dropped. Boris Johnson is a liability who will lose them the next general election.

What began with an early failure to lockdown, leading to one of the highest COVID death rates in the world, billions wasted on test and trace and PPE, and continued with Partygate, a fixed penalty notice, numerous lies in the House of Commons, and led to the loss of two by-elections, is ending ignominiously with the exposure of the fact that Johnson knew that Tory MP Chris Pincher had a record of sexual misconduct but still appointed him as deputy chief whip. Of course, Johnson, true to form, denied he knew about Pincher, but the truth was finally revealed on Monday along with this from Dominic Cummings:

“Johnson’s spokesperson declined to comment on whether Johnson had ever referred to the MP as “Pincher by name, Pincher by nature”, saying: “I’ve seen those unsubstantiated source quotes and I don’t intend to respond to them.”

Johnson was forced into yet another humiliating apology, one of many he has made in the past six months.

On Tuesday evening, Sajid Javid, the Secretary of State for Health and Social Care, resigned, followed swiftly by Chancellor Rishi Sunak. The game was on. This was succeeded by a string of further resignations by junior ministers, statements from Tory MPs that they had lost confidence in him, and calls from the Tory press for him to resign. Predictably Johnson has decided to cling on. No doubt many of those resigning will be looking to their own futures in a new cabinet.

At PMQs even Starmer managed to land a few scripted blows on a visibly ruffled Johnson, and it was noted that Michael Gove, Secretary of State for Levelling Up, Housing and Communities, was conspicuous by his absence. Later Gove called on Johnson to go. And later yesterday evening, he was sacked by Johnson. After PMQs Johnson was subjected to a grilling by the Privileges Committee, during which, after evasion, he admitted that he had ’probably’ met the former KGB agent Alexander Lebedev whilst he was Foreign Secretary and without any officials present.

This was followed by the 1922 Committee deciding to hold an election for new members next Monday which could result in a fresh confidence vote, if Johnson is still in No. 10 by then.

The media has reported that this evening a battle is going on in No. 10 with some ministers, including Zahawi and Patel, telling Johnson to go and others trying to persuade him to stay. The prevailing view is that Johnson is determined to hang on as long as he can, claiming he has a mandate from the people. We may still have to wait until next week and another confidence vote from Tory MPs which he will surely lose.

Make no mistake, whoever replaces Boris Johnson as party leader and PM will be no better for the UK, in fact they may even be worse. Expect more austerity, more NHS privatisation, more refugee bashing and a fundamental failure to deal with the multiple economic and social problems afflicting our country. The Tory Party has completely lost its way, in no small part due to its shoddy mishandling of Johnson’s ’oven ready’ Brexit. You may be raising a glass to his imminent departure but who knows – in the coming weeks you may not be able to afford to.