Butler to the World: How Britain became the Servant of Tycoons, Tax Dodgers, Kleptocrats and Criminals by Oliver Bullough, 2022 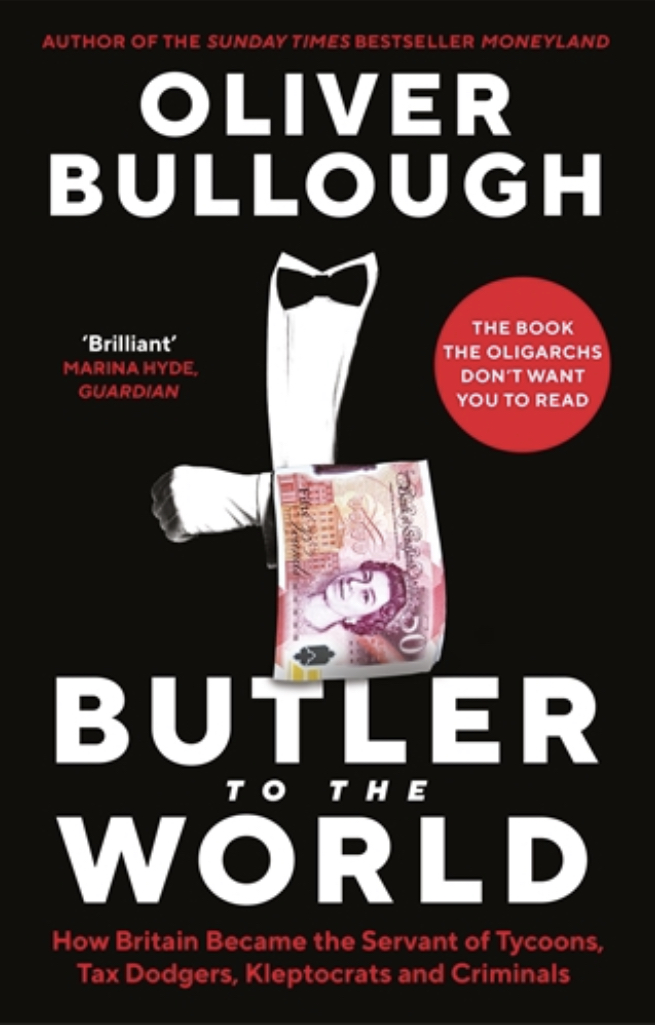 In “Butler to the World” Oliver Bullough makes a direct comparison between the activities of the scheming and immoral manservant Jeeves and some firmly rooted dubious and sordid practices in the UK which began as long ago as the 1950s. These practices assist unscrupulous characters, who clearly believe they are above the law, to dodge taxes, launder money and make huge profits from underhand schemes that are demonstrably unethical and often involve criminal behaviour.

Jeeves was a fictional character in a series of stories by P G Wodehouse (1881-1975). They were set in the late 1920s/early 1930s. Such was their impact that the name Jeeves became common parlance and is still used in a generic manner today. Indeed, so ubiquitous is the name that there is an internet search engine called ‘Ask Jeeves’. Jeeves has been referred to as both a valet and a butler to the idle Bertie Wooster, an extremely rich character of questionable morality. Wooster landed himself in all sorts of difficulties, and Jeeves proved himself indispensable, often managing to manipulate situations as he succeeded in extricating Wooster from no end of scrapes and threats and in smoothing things over, so Wooster could carry on just as before. Jeeves has useful connections, including rather suspect ones, and can engineer situations to his and therefore Wooster’s advantage.  He can resort to blackmail and bribery and even acts of violence.

Bullough has investigated at some lengths how the UK is providing services steeped in immorality which benefit the rich and involve a good deal of dirty money. Throughout the book he makes comparisons between these goings on and the machinations of the ever loyal Jeeves. UK individuals and organisations can make money assisting rich clients such as oligarchs and global corporations to get away with things they could not possibly manage in other countries. Bullough reveals no end of tax-dodging and money laundering activities and the exploitation of loopholes which often leave a trail of victims, many of whom have suffered huge losses as a result. In the process, UK rules and taxes are undercut . Those involved can exploit variations in regulations in different parts of the UK which “provide loopholes that the clever butler can use to hide his clients’ assets, behaviour and even existence”. These dubious and immoral activities can also thrive because, as Bullough explains, even where there are rules to deal with this behaviour, the law enforcement bodies and regulators have been both underfunded and undermined. Britain in fact has a major role in hindering worldwide attempts to deal with corruption.

Many of us have become aware of the tax havens in the Cayman Islands and British Virgin Islands, but Bullough also describes tax dodging and corrupt practices in such locations as the UK itself and the Isle of Man, Gibraltar and Anguilla. Do many of us know the amount of money made in Gibraltar by the skulduggery involved in establishing a hugely profitable gambling set up? And who knew how Boris Johnson set out to delay a report by the intelligence and security committee into seemingly dodgy Russian activity in the UK?

Bullough is a valuable source of information and reveals truths which most of us are scarcely aware of. He writes as a steely campaigner, a fact which became clear in his 2018 publication “Moneyland”. He writes directly and with a heartfelt determination to expose the truth in the hope that these immoral practices will one day come to an end. It is clearly an uphill task, as the roots go deep and involve bankers, politicians, the city, corporations, lawyers and lobbyists who find the butlering immensely lucrative. The conflict in Ukraine has complicated the situation, but this is not analysed, as the book was in the process of publication before the war broke out. However, it is likely we will hear more from Bullough in his quest to bring this immoral and often criminal activity to light.

2 thought on “Butler to the World: How Britain became the Servant of Tycoons, Tax Dodgers, Kleptocrats and Criminals by Oliver Bullough, 2022”