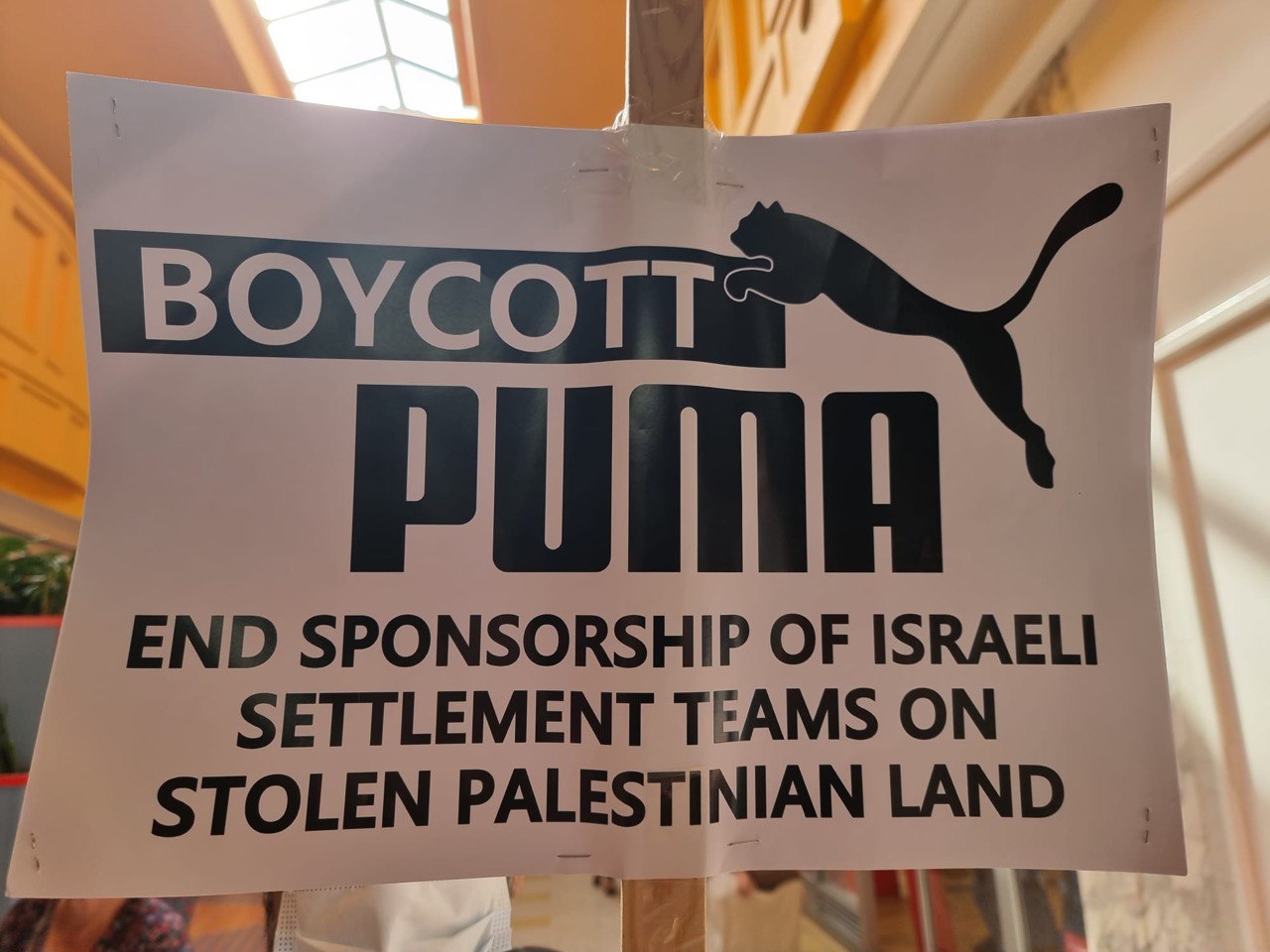 Boycott Puma is part of the Boycott, Divestment, Sanctions (BDS) movement. It seeks to put pressure on the international community to end their support for Israel. The campaign goes on until it complies, both with international law, and United Nations resolutions regarding its treatment of Palestinians.

Organisations like the Palestinian Solidarity Campaign (PSC) organise days of action to draw attention to the big names on the High Street that profit from the illegal occupation of Palestinian land by Jewish settlers. By and large, these settlers are not fleeing from antisemitism and pogroms. As we reported last week, many are well-to-do people from the West. Yesterday was a National Day of Action against Puma. Critical Mass is pleased to share this account of the actions of the Eastbourne branch of the PSC. It was sent to us by PSC supporter Ann Marcial.

My local PSC group decided to support the Boycott Puma Day of Action. We assembled outside of Boots in the High Street. We briefly paused to organise who was going to hold the letters B O Y C O T T  P U M A. I was very fortunate to get the B which meant I was first on the right, your left if you were facing me. It gave me a sense of purpose which was very satisfying.

We entered the Beacon, one of those dreadful places people call a Mall, and a few yards in we stopped in front of JD Sports who stock Puma products.  I suppose we were there about 20 mins. We didn’t speak unless a passer-by asked a question. A couple of the group gave out leaflets and our PSC Secretary read out the information regarding PUMA. Then we moved on to Sports Direct, and a shoe shop that we noticed had support for PUMA in their window.
There was a fair bit of interest in what we were doing. So Security arrived, but left without comment. This was the second day of action against PUMA we have participated in. The last one was about 6 weeks ago.

Why we did it

Why were we supporting the Boycott Puma Day of Action? Currently, Puma are sponsoring football in the illegal settlements in the West Bank. Puma, alongside other companies profit from Israeli action that the UN has condemned in numerous resolutions that call on Israel to abide by international law.

Sadly, countries like the USA and the UK condone the illegal actions of the Israeli government. The only country from our area to condemn these behaviours is the Irish Republic, who are in total solidarity with the Palestinians. Israel has stolen these lands from Palestinians. Companies like Puma exploit this situation in order to boost their profits. These companies have no moral compass. So I say, Shame on you PUMA! We will keep on organising our Boycott Puma Day of Action until you change your policy towards Israel and its illegal settlements on the West Bank.

How to get involved

There were 22 places in Britain supporting the Boycott Puma Day of Action yesterday. But, even if you don’t have a branch near you, you can still support the campaign. PSC have a letter on their website that you can sign and add to the pressure on Puma.

Give us your news

This is just one example of grassroots events that are happening every day. Often, they go unreported. So, it is little wonder that socialists become demoralised because they think nothing is happening. Creating Socialism wants to change that. If you are organizing an event, let us know and we will publicise it in our calendar. Next, we want to hear what happened. Be like Ann and tell us how it went. Furthermore, if you have any photos we can use, so much the better.

One thought on “BOYCOTT Puma Day of Action”