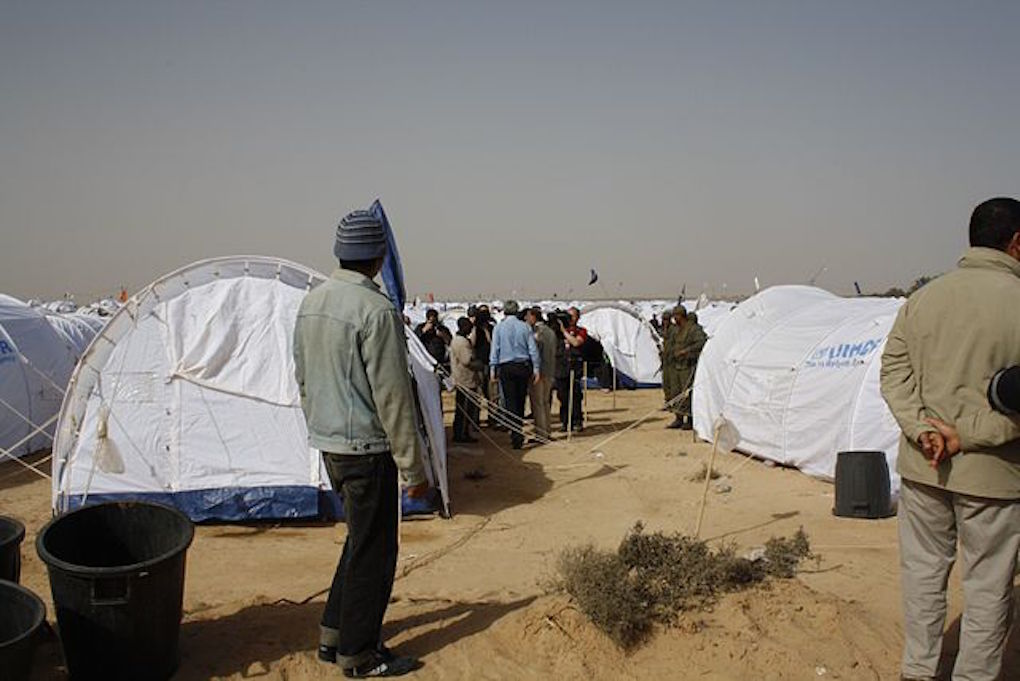 Transit camp for migrants near the Tunisian border with Libya. CC Attribution 2.0

MOST of us will remember the Arab Spring, when pro-democracy uprisings in countries including Tunisia, Morocco, Syria, Libya, Egypt and Bahrain generally began in the spring of 2011, which led to the name.

It began with the so-called Jasmine Revolution in Tunisia where street protests, especially in the country’s capital, Tunis, eventually led to authoritarian president Zine El Abidine Ben Ali, who had ruled for more than 20 years, fleeing to Saudi Arabia. The country’s first democratic parliamentary elections were held in October 2011 and this inspired the people of other oppressive regimes to take action in their own countries.

We all had so much hope for these countries then, but unfortunately not all of the movements led to increased democracy and cultural freedom. Indeed, for many of those involved, the period since has seen increased oppression and instability. Here, I am going to focus on Libya, only too often forgotten nowadays.

While the leader of Libya, Colonel Muammar al-Qaddafi was overthrown in October 2011, in what had become a violent civil war, and was tortured and executed by opposition fighters, attempts to build a democratic state after this have disintegrated into a new civil war between rival governments.

So what happened between the beginning of the protests and now? It’s a complex issue, and Qaddafi made it clear within just one week of the beginning of the protests that he would hunt down those who protested “inch by inch, room by room. Home by home, alleyway by alleyway, person by person”. It was this speech that prompted the UN to ask NATO to assist in ridding Libya of its dictator leader.

Amnesty International’s report at the time which stated that Qaddafi’s forces had “fired indiscriminate rockets, mortars and artillery shells as well as cluster bombs into residential neighbourhoods, killing and injuring scores of residents. On several occasions they fired live ammunition or heavy weapons, including tank shells and rocket- propelled grenades (RPGs), at residents who were fleeing – in what appeared at times to be a policy of ‘shoot anything that moves’” would appear to have borne out the need for intervention, but did this help the people of Libya?

Failed in their duty to protect

Subsequent events lead me to say no. NATO intervened under the auspices of Responsibility to Protect which means the ‘responsibility to help to protect populations’ yet failed to do so. And failed abysmally. ‘Populations’ includes all citizens based within the country, yet throughout the intervention, NATO failed in this duty to protect. This is clear from reports of rebel opposition groups torturing individuals based upon their skin colour.

This had of course been happening prior to the protests when the treatment of migrants from sub-Saharan countries by the Qaddafi regime was appalling, but it has continued throughout the civil war.

The oil-rich country had one of the highest standards of living in Africa under Qaddafi but since the war began there are widespread problems, not least shortages of medicines, power cuts and, according to the UN, almost one and a half million people in need of humanitarian aid.

Are citizens better off?

Let’s look more at how citizens fared under Qaddafi’s rule. Yes, he ruled with an iron fist and tolerated no opposition, but:

Does this mean Qaddafi was a great and good leader? Of course not, just as Saddam Hussein in Iraq was not, but, and this applies to both countries, are the citizens suffering more because of Western intervention and could they have achieved more if left to fight their civil war? It’s impossible to answer as there WAS intervention and the civil war in Libya continues to this day.

Since 2014 the fighting has mainly been between rival centres of political power in east and west Libya – the Tripoli administration, the Government of National Accord (GNA), which was led by Fayez al-Sarrajas Prime Minister until early last year, and the Tobruk administration, also known as the Council of Deputies, which won the 2014 elections – elections widely accepted as being democratic despite low voter turnout. The Tobruk government appointed general Khalifa Haftar to lead the Libyan National Army (LNA) and restore its sovereignty.

However, shortly after the 2014 elections, the losing parties joined together to form the New General National Congress. Upon losing, this alliance formed two military forces: the Libya Shield Force and the Libya Revolutionaries Operation Room. These forces came together to take over the capital, Tripoli. This move forced the Council of Deputies to seek refuge in Tobruk, located in the eastern region of Libya.

The GNA is officially recognised by the UN as Libya’s legitimate government, though it holds little power on the ground, and some distrust its Islamist politics. The supporters of the Council of Deputies leader Haftar say he is a buttress against extremism, while others see him as another would-be military dictator, and one who has committed war crimes.

One year ago, following lengthy United Nations-sponsored talks, Abdul Hamid Dbeibah, was chosen as Libya’s interim Prime Minister, which came as a surprise to many given his close association with Qaddafi. His position has been contested since 10 February 2022, when Fatiha Bashagha was selected as prime minister by the Libyan House of Representatives. Dbeibeh has rejected Bashagha’s appointment as prime minister, stating he will only hand power after a national election. Haftar, on the other hand, has welcomed Bashagha’s appointment.

Just last week the UN’s top official in Libya, Stephanie Williams, offered to mediate between these political rivals in a renewed push for long-delayed elections, warning against ‘escalation’ after a parallel government took office.

Meanwhile, as all the political shuffling takes place, Libyan refugees are still suffering with no apparent end in sight. A report by Amnesty International entitled ‘Between life and death’: Refugees and migrants trapped in Libya’s cycle of abuse states: “Libya, a country torn apart by years of war, has become an even more hostile environment for refugees and migrants seeking a better life. Instead of being protected, they are met with a catalogue of appalling human rights abuses and now unfairly blamed for the spread of the COVID-19 pandemic on deeply racist and xenophobic grounds. Despite this, even in 2020 the EU and its member states continue to implement policies trapping tens of thousands of men, women and children in a vicious cycle of abuse, showing a callous disregard for people’s lives and dignity“.

Just as the invasion of Iraq brought about the rise of ISIS and terror for many all over the world, in Libya, since the fall of Qaddafi, slavery has become all too common. People trying to flee the country are often kidnapped, physically abused by long working hours, and also sexually abused by traffickers of women and children.

They fall prey to armed groups and networks of smugglers. A very high proportion of migrants are used as day labourers in the construction and agricultural sectors. They are beaten, sometimes to death, and also, raped, kidnapped, ransomed, starved and enslaved. This is the reality for hundreds of thousands of Libyans who were ‘freed’ by the West in 2011.

The only way out for these people is by sea, across the Mediterranean, which is not only a dangerous trip where they risk their lives at sea attempting to seek safety in Europe, but a journey where they are usually intercepted, transferred back to Libya and the same abuses they sought to escape.

This is happening now. Right now. While we are talking about taking in refugees from the war in Ukraine – as we should – we should not be turning our backs on the refugees from Libya and other countries. But I fear we will continue to do so.