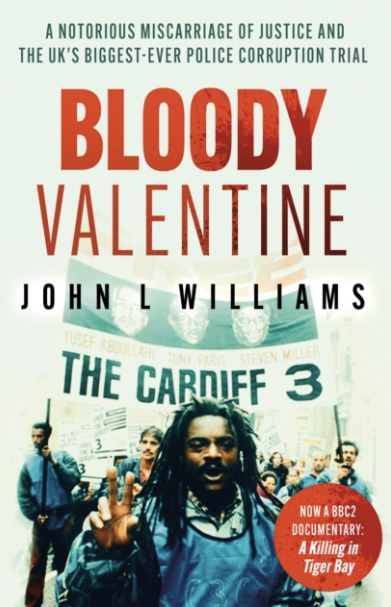 I have seldom read any books which talk about the city I grew up in. As a Cardiff boy through and through since 2000, and one from a fairly calm neighbourhood, my perception of the city colloquially known as ‘The Diff’ has always been that of a civilised city. Far from those mucky violent cities such as London or Birmingham or Manchester, Cardiff – I believed – was a rare exception and proof that when people come together they can exist harmoniously.

I won’t say that I retain that view now; certainly I do not believe that all people treat others equally or with respect. I definitely know better than to think Cardiff some idyllic little city where they film Doctor Who. Cardiff might not be the most dangerous city in the world but it has had its time in the dark.

It wasn’t so long ago that Cardiff’s now splendid bay was once Cardiff Docks. And before that it was Tiger Bay, home and port to all sorts of sailors of the seven seas. Far from the waterfront of restaurants and pubs, this was once a land of adventure and mystery which inspired intrigue all over South Wales and brought in crowds as far away as Merthyr to spend just a night in this most legendary part of my home town.

Or so John L. Williams writes. It’s his book Bloody Valentine (1988) that’s inspired me to take a renewed interest in Cardiff as more than just a city where I was raised, but a city where legends were made. It’s sad that amongst these great stories of pirates like Captain Morgan and legendary boozers like the Custom House there’s a tale of tragedy and injustice, as relevant to today as it was then. It is one of the greatest acts of injustice to occur in Cardiff’s recent history – the murder of Lynette White, and the false conviction of the Cardiff Three.

It all goes back to 1984 in Butetown, a neighbourhood with a rich history of Black and Asian communities that exists just west of Cardiff’s city centre. This was back when Butetown was more than a walled off area just outside the city centre and a thriving, if not slightly criminal, heart for many of the Black and Asian communities in Cardiff. It was a place known for its gambling dens, its drug dealing, its foreign foods and spices and, unfortunately, where a person could buy someone’s time and body for less than a tenner.

Here was where Lynette lived as an escort on the street, hustling her way from day to day, until one day someone decided, in all their petty cruelty, that, for the sake of a few quid, she deserved to be brutally hacked apart. The murderer, Jeffrey Gafoor, was caught and convicted in 2002. As he tells it, after going to Lynette but deciding against her services at the last minute, he demanded his money back. Lynette refused, and so Gafoor hacked and stabbed her more than eighty times.

Gafoor deserved his sentence and more, but he wasn’t the police’s first suspect. Far from going with the evidence, the police at the time used the cohesion of false witnesses and the relentless bullying of their prime suspect to frame five Black and Asian men. Of these five, three were convicted; Yusef Abdullahi, Tony Paris and Stephen Miller, the latter being Lynette’s boyfriend and pimp. All five had connections to the criminal element, none were innocent of any crime. And yet not one of them was a murderer. They were, however, non-whites, and that was seemingly good enough for a Caucasian crowd of jurors from Swansea to sentence 60% of those the police arrested to prison (where they had already spent two years awaiting their trial).

Williams tells this story as more than just someone who had heard about this most horrific murder and had written about it after the fact. He had in fact been born in Cardiff and decided to return to his hometown to pursue his own interest in the case directly. Working on the street, he spent time with Abduhalli’s brothers as well as families who supported the movement for the vindication and release of the Cardiff Three. Williams witnesses some of the most prominent moments of the case directly, most notably the overturning of the conviction of Paris, Abduhalli and Miller.

It’s a story which seems overly complicated in its writing. Williams includes such a large cast of characters that it can seem a little overwhelming at times to keep up. On top of the five accused there are also other passing names such as Leanne Vilday, who was Lynette’s roommate and who may have discovered her body, Ronnie and John Actie, the cousins who had initially been accused of partaking in the murder, Debbie Haggat, who was Leanne’s girlfriend/pimp, and this is to name just a few. It all seems to blur together in a cocktail that once drunk leaves you confused, disorientated, slightly unsure as to what happened.

Coincidentally, this is more or less the case that the police had against the five accused, a blur of witness statements which never quite seemed to coincide and managed to point the blame at those they deemed their enemies. It was almost as though some were using White’s death as a means of revenge against those they felt had wronged them.

In 2012 the Director of Public Prosecutions, Keir Starmer, the ‘ever amazing and best labour leader ever’ (if you didn’t catch that sarcasm here’s me spelling it out) intervened and asked the Crown Prosecution Service Inspectorate to examine the trial of eight former police officers. They were cleared of fabricating evidence. This was never going to achieve justice. After months of inquiry, all files relating to the accused officers and their actions taken during the investigation were ‘mysteriously destroyed’. Starmer, far from seeing this as wrongdoing, declared that the trial had to end given the ‘lack of disclosure’. The missing paperwork was said to have been shredded but surfaced only weeks after the end of the trial. As a result, no officers were or have been to this date found culpable of misconduct and this case has had a devastating impact on the lives of those originally accused.

It’s a sad reminder that, even after nearly four decades, justice has still not been done for these five men. They, like the Guildford Four or the Central Park Five, have been left to clean up the mess themselves whilst those that bullied and intimidated them into submission have got off scot free. I imagine this has nothing to do with the colour of the arresting officers’ skin (sarcasm again).

William’s book is more than just a retelling and an in-depth account of Butetown and Lynette White but a stark reminder of how easily our society ignores tales of injustice and prejudice against the working class and Black and Asian members of our society. Instead, we’re more than happy to tune in to some pointless celebrity gossip or watch some stupid show like Riverdale.

And yet stories like this do matter. Whether it’s four decades or four minutes, justice should not be based on the colour of your skin or how much money your mummy and daddy have stashed in the Caymans. And more than that, it’s a reminder of how easy it is for a miscarriage of justice to happen. I’m happy to be a Cardiff boy, proud of it too, but I’ll be happier still if, in my lifetime, another miscarriage of justice such as this never occurs again.

So, in summary, if you’re looking for a short book on true crime, but also looking for something on the, frankly, underappreciated rich history of Cardiff, then I highly recommend this book. While at times it does feel like Williams is being overly complicatedl, this is because, on top of telling the tale of Lynette White and the Cardiff Three, he’s also filling in the whole recent history of Tiger Bay. And while it does at times feel lengthy, its conclusion makes it worth sticking with  – a solid 8/10 read.