Barates and Regina and Many More 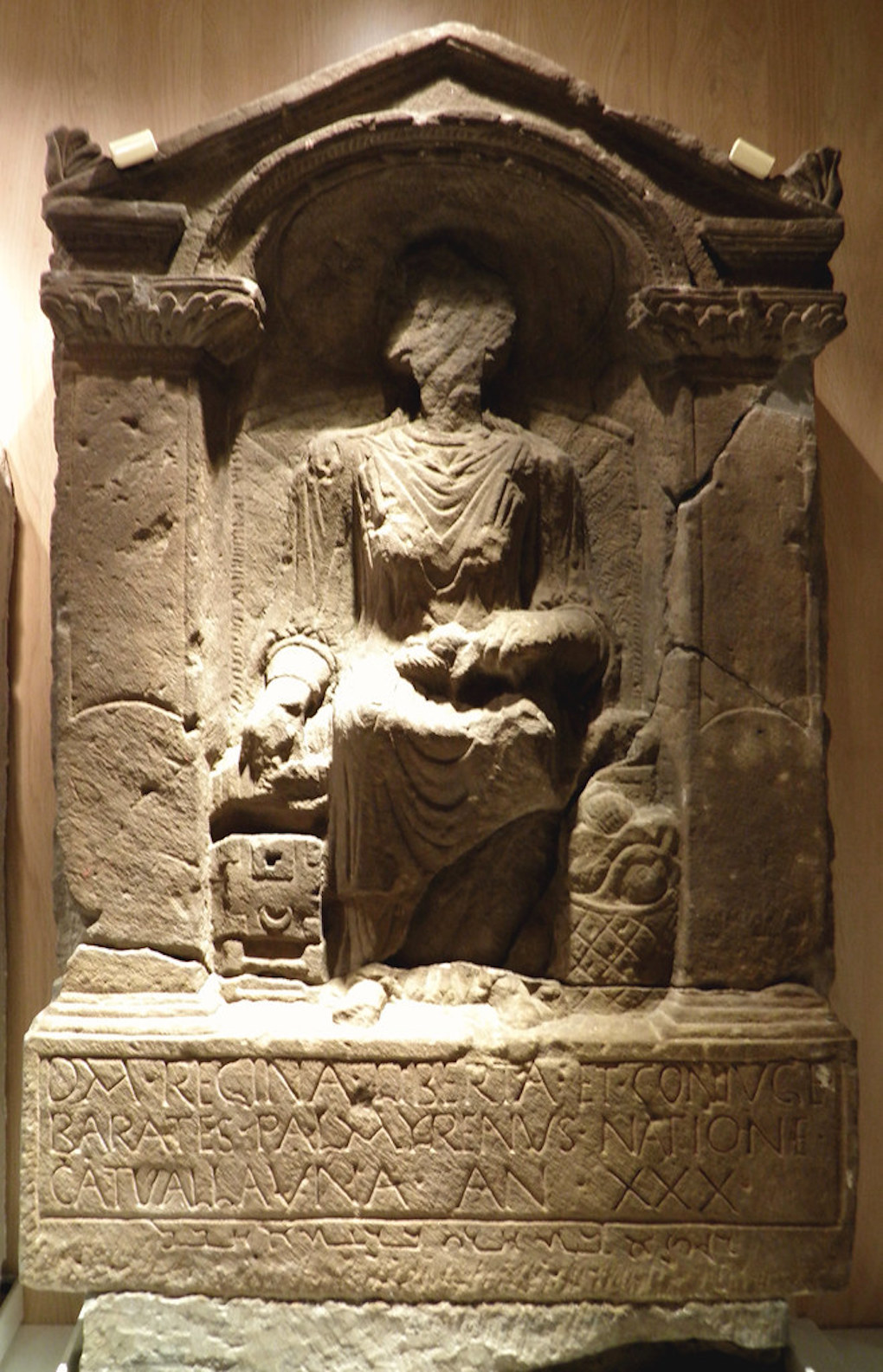 Barates and Regina is a love story. Barates was a Syrian who came to Britain and married a woman from the South of England. They moved north to Tyneside, to Arbeia at the Eastern end of Hadrian’s Wall. When Regina died young – she was only thirty – Barates found a skilled stonemason who crafted a memorial in the style of his native city. The inscription reads thus:

Barates the Palmyrene put this up for Regina, ex-slave and wife, aged thirty, of the Catevullaunian tribe.

The inscription is in Latin, and underneath, on a more personal note in Barates’ native Aramaic, it reads, “Regina, freedwoman of Barate, alas.”

This is a love story from Roman Britain at the height of empire. Palmyra in Syria and the Roman fort of Arbeia are 4,000 miles apart. A much shorter distance from Arbeia, modern South Shields, to Burgh-by-Sands at the Carlisle end of Hadrian’s Wall, leads us to a unit of North African soldiers from Morocco who were stationed there 200 years later.

The Roman occupation of Britain lasted for 400 years and brought a mix of cultures from the length and breadth of the empire to our shores. And they had a lasting impact on how people thought about our country and its origins.

From Troy to London

One of Rome’s foundation myths is that Aeneas arrived there after the Greeks sacked Troy following a long and dangerous journey which is celebrated in Virgil’s epic poem, the Aeneid. One of Britain’s foundation myths concerns Brutus, the grandson of Aeneas, who came to Britain and claimed it for himself, after defeating the giants who already lived here. He is said to have established ‘New Troy’ on the site of modern London. According to another myth, the giants had originally come from Africa, bearing great stones, which eventually became Stonehenge, after Merlin used his magic to move them from Ireland.

These myths were written down in the Middle Ages. It was a time when England in particular, and there are parallel stories in the Scottish, Welsh and Irish traditions, was developing a national identity. But it was not based exclusively on a White Anglo-Saxon or northern heritage. This was a time when Rome still dominated. English writers were keen to demonstrate their connection to the Roman Catholic Church and to the classical tradition that preceded it. They were okay with the idea of African giants and wizards, and even a tale of thirty Syrian princesses, who came to Britain and married the giants, as part of our national identity.

We’ve come a long way from the multicultural mythology embraced by our ancestors to build their sense of national identity. Now the nationalists are the ones who invoke a spurious white supremacist version of mythology, which we counter with factual evidence of our multicultural origins. In doing so, we are remembering the forgotten people who helped make our history. And many of them were Black. Hence, we have resurrected figures like Mary Seacole alongside Florence Nightingale in the Crimean War. But there are many more.

In my own adopted county of Cumbria, one of the whitest places in Britain, Anti Racist Cumbria have uncovered five Black lives that mattered and continue to matter.

John Kent (1805 – 20 July 1886) is Britain’s first Black officer. He was a constable at Maryport before joining the Carlisle City Police. Kent was the son of Thomas Kent, a freed slave from the West Indies.

Roy Francis was a star player for Barrow Rugby League Club in 1939. After the war, he returned and should have joined the international tour of Australia, but the Australian colour bar meant he wasn’t selected. He went on to become rugby’s first Black coach and the first Black coach of any sport in Britain.

Peter Foley MBE, joined Workington Reds  in the 1960s not only as Cumbria’s first Black professional footballer, but at a time when the number of Black footballers in the UK could be counted on one hand.

I remember Win Langton. I knew she was a long time Communist Party member who raised so much money for Medical Aid for Vietnam that they gave her a medal, and, in 1988, the Vietnamese ambassador even came to stay at her Ulverston council house.

In 1967 Winifred founded a Hiroshima Day Vigil which took place annually for more than thirty years at the Market Cross in Ulverston. By the 1980s she and other ‘pensioners for peace’ joined the protests at Greenham Common.

What I did not know until I read her obituary, was that Win’s mother was a working-class London suffragette and her father, who was an active trade unionist at Woolwich, was the son of a freed slave from Guyana.

We need to remember more forgotten people like Win and celebrate the contribution by Black people like her to working class history and to our future.