Are the Tories really the party of working people? 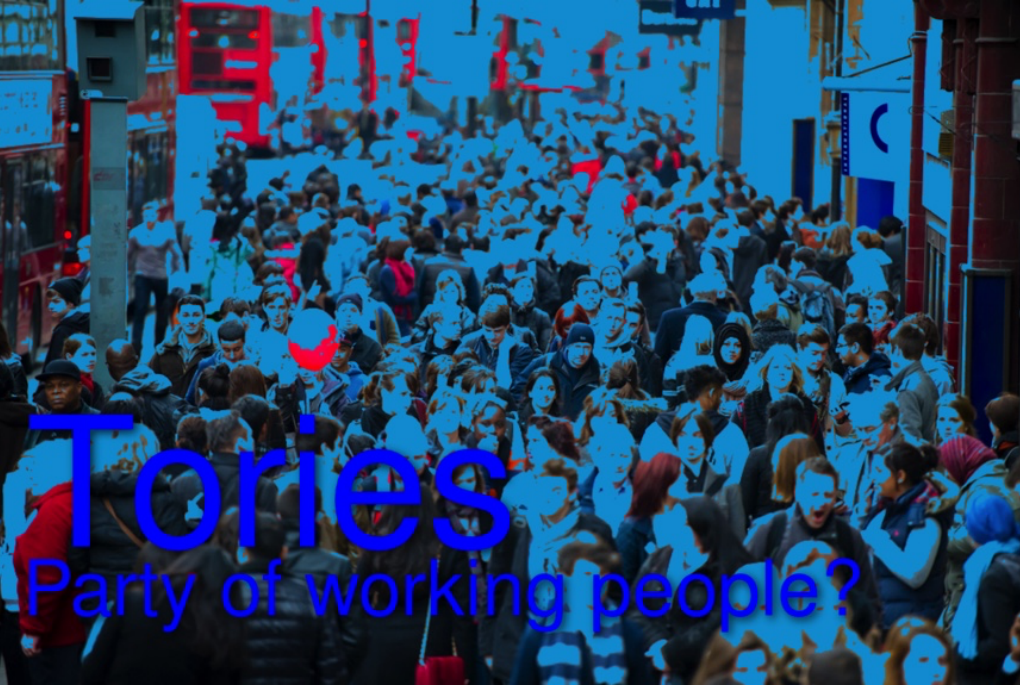 What is Boris Johnson selling?

Boris Johnson’s attempt at rebranding himself as a ‘populist’ is seemingly still ongoing. The larger project of gaslighting and duping the UK into believing the Tories are the ‘party of workers’ may prove to be a more difficult sell.

The PM told Andrew Marr on Sunday that there is ‘growth in wages after more than 10 years of flatlining. What you’re seeing is people on low incomes being paid more’. This is a claim in true faux populism style. Talking about what matters to people he has no idea or connection to. This is so misleading as to be bordering on a lie. Even ignoring the collapse of wages, under Tory administrations from 2011 only recovering to the same level a decade later, the cataclysmic loss of wages due to Covid in the Spring of 2020 allows for almost any recovery to seem dramatic.  That is what Johnson is trafficking in not the facts.

Don’t worry, the Chancellors got this

On the surface, Tory members and voters are ‘concerned’ at Johnson’s apparent ‘moving to the left’. In order to quell those fears enter the Chancellor of the Exchequer, Rishi Sunak.  The most prominent of the ‘authentic’ Tories is the ‘fiscally responsible’ Chancellor. He told the Tory party conference on Monday that he lauded the austerity policies of his predecessors and that  ‘tax cuts will only come when public finances are back on a “sustainable footing”.’  The relief at conference was palpable. Here was a senior Tory, the Chancellor no less, saying what had to be said, but out loud. Not behind closed doors. Particularly when he followed up by telling conference in relation to the universal credit cut: “it was not right for claimants” “just to increase their benefits”.’

Sunak went on to riff on an oldie but hideously insidious claim that those in poverty, the working poor, the low-waged and exploited should simply get  “good work, better skills and higher wages”.  This ‘hit’ from the ‘pick of the pops’ was a rerun from July 2021, when Sunak claimed that people on benefits and in poverty should get a “good job” rather than relying on the state. That’s more like it. Much more Tory like.

However, Sunak has overseen the worst economic crisis among the G7 countries, with the UK economy shrinking by 9.9% in 2020 making any recovery harder to achieve and further away than in Canada, France, Germany, Italy, Japan and the US. He must be given credit for being partially correct with his ‘recollection’ of the previous decade. He is performing exactly as his predecessors did. Cruelly creating misery for the majority of our people and with the same indifference.

Let’s remove any doubt. Let’s have a real Tory message

If the Chancellor’s performance didn’t settle the nerves and concerns of members that the Tories were ‘lurching left’ and that at next years conference they may have to sit next to a black, single, benefit-claiming, working Mum, Wayne Fitzgerald sealed the deal. Fitzgerald is the Conservative leader of Peterborough City Council.  In an interview with the BBC, when asked about the removal of the uplift to Universal Credit, Fitzgerald said:

“Finances for many are at critical, but there are other ways you can go and generate some money for your family.“

‘I think I would be one of the first to say here that families should take responsibility for themselves, the way they live their lives, how many children they have, what they do with their tax, what jobs they have.’

Fitzgerald would like to take credit for being the first to say that those on benefits, those suffering low paying work, those exploited by this system and those that have a severe lack of life choices and agency, should not be supported by the society they are a vital part of. He is, however, far from that.

What’s the over/under on the ‘party of workers ’ thing, Boris?

So, it would appear that whilst Johnson is performing parts of what he thinks of as being a ‘populist’ politician, the Tory project is still going in the ‘right’ direction.  I am certain it was with much relief that all the usual, but some much enhanced, vicious, derogatory, sneering and aggrieved tropes about people that are not them, have been rolled out at the conference. If that didn’t do the job then it would have been a relief to even the Jacob Rees-Mogg’s of this world to hear the vilest thoughts of their party spoken, loud and proud, on national television by Wayne Fitzgerald.

Those with a huge, left-wing platform are fighting this, right?

I imagine most political commentators will not be buying what Johnson and his party are selling. Clearly, I’m not! The idea of Johnson as anything other than simply someone out for himself and, at a push, those like him, is absurd. We only need to look at his history, where he came from and how he got there to understand that.

However, the population, given mostly positive views by the mainstream media, of BJ and his gang of mobsters, loyal to no one but themselves, may well be ‘absorbing’ a different conclusion. Agreeing that perhaps the Tory party is just like jovial, blustering, Boris. After all, he’s not so bad, right? That could be the gateway to people ‘accepting’ that perhaps the Tory party could be the party for working people.

This is where a Labour Party instead of eating themselves could, and should, be attacking the withdrawal of the UC uplift, depriving those most in need of income that prevents them plummeting into poverty. They could be arguing for a living wage for all, perhaps including the £15 minimum wage voted through overwhelmingly by their own members. They should be showing it is the catastrophic lack of leadership by the Tories over the economy and welfare that has created a situation where at least 40% of UC claimants are working! But sadly, they are not doing any of that.

The next obvious question to skewer this Tory pretence is why have you chosen a regressive tax to provide funds for Social Care when this negatively affects the poorest in society with the least incomes? There are many other simple, straightforward observations of what it is the Tories have done and will do to strengthen their position and steal from those in no position to resist them.  All of these, hell any of them pressed hard enough, show the Tory party and their leader for what they are.

So, are they the ‘party of working people’, or what?

They are a party filled with those aggrieved that the world has moved on, that they can’t use the ‘N’ word anymore, that they can’t just do what they want when they want, just like in the good old days, because, goddamnit, all of these ‘poors’ wanting equality…

This should make it crystal clear to anyone that, no, they are not the party of working people.