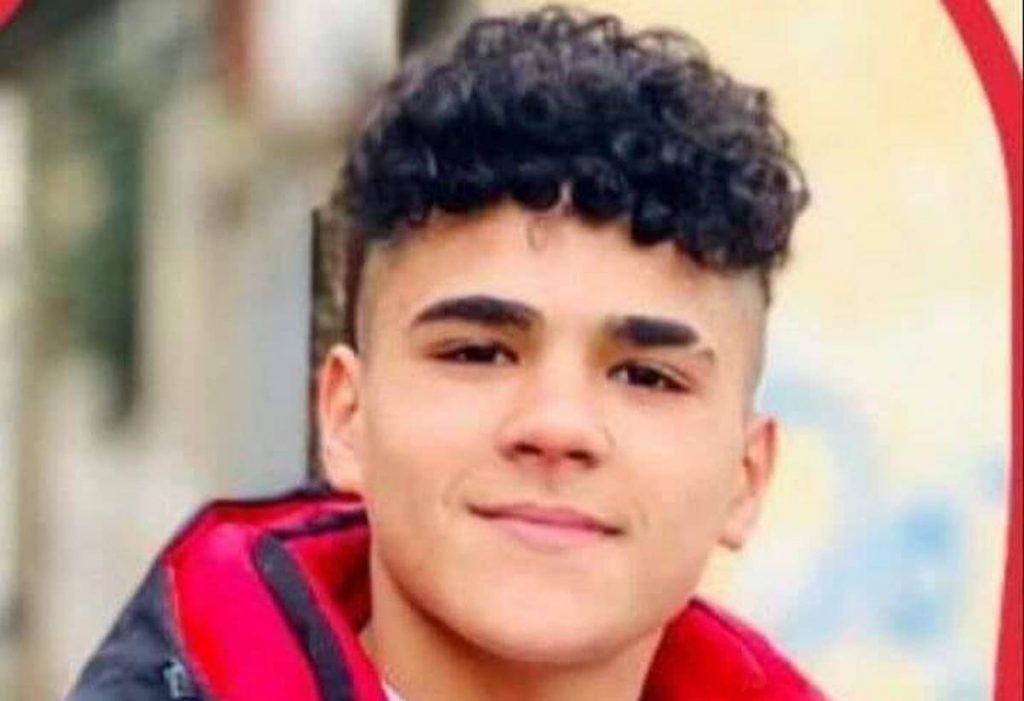 EARLY on Wednesday morning yet another Palestinian was killed by Israeli forces, and at least 80 others were wounded during clashes with the Israeli army in the Nablus area at the site of St Joseph’s tomb. The army were providing protection to Jewish settlers visiting the site. According to the official Palestinian news agency Wafa, those injured included 19 who were hit by rubber bullets and more than 65 from tear gas suffocation.

16 year old Ghaith Rafeeq Yamin was shot in the head, and was taken to Rafidia public hospital in Nablus in critical condition. He was pronounced dead 15 minutes later. The boy was in the tenth grade at school. He is the ninth child fatality so far this year, and brings the total number of Palestinian children killed since the turn or the century to 2,210, according to Defence for Children International.

The Palestinian Authority (PA) later said in a statement that it calls “on the international community to break double standards and provide protection for our children and our people from the killing machine that kills them daily.”

The Israeli media claimed that Palestinians were throwing rocks and Molotov cocktails, to which the Israeli army responded with live fire. This is apparently an appropriate response to rocks and molotov cocktails. The silence in the mass media reveals the hypocrisy at the heart of their supposed concern for human life. In Ukraine civilians are encouraged to throw Molotov cocktails at Russian troops, yet when Palestinians are killed for doing the same thing that same media has nothing to say.

Israeli forces nowadays raid Palestinian homes in the occupied West Bank on an almost daily basis and so far this year, 57 Palestinians have been killed by Israeli forces in the West Bank. Yamin’s family can expect no justice for their son’s death, just as there has been none for all the other Palestinians killed. Even when the much-loved journalist, Shireen Abu Akleh was killed by Israeli forces earlier this month and there were calls for an independent investigation into how she was killed, it was reported no such investigation would take place as a probe which treats Israeli soldiers as suspects would lead to opposition within Israeli society. (Though it should be noted that the Palestinian Authority has announced the results of its investigation into her killing, saying it shows Israeli forces deliberately shot and killed the reporter.)

And in amongst all this comes the annual march by Israelis through Jerusalem’s Old City this coming Sunday. The annual flag march celebrates Israel’s capture of the Old City in the 1967 war. Despite the lack of international recognition Israel deems all of Jerusalem its capital. The Palestinians also view Jerusalem as theirs and want to establish their own capital in the city.

Bassem Naim, head of Hamas’s department of politics and foreign relations, has urged international governments to pressure Israel to reroute the contested march, which is currently expected to pass through the heart of the Muslim quarter.

“I expect that Hamas and the other (military) factions are ready to do all they can to prevent this event, regardless of how much it costs us,” Naim told Reuters News Agency. “The decision is in the hands of the Israelis and the international community. They can avoid a war and escalation if they stop this mad (march),” he said.

Last year an 11-day war was triggered by the march as Palestinians in Gaza fired rockets into Israel as the 2021 march got underway. The march which had initially been cancelled by Israeli police went ahead and predictably it was Palestinians who were arrested. A ceasefire was declared shortly afterwards but lasted barely four weeks with spurts of attacks from both sides occurring in the meantime. But now, a growing crescendo of threats from Gaza over the projected 2022 route has raised fears of a new conflict.

Tensions have been rising in the area this year, especially as Israeli forces have repeatedly raided the Al Aqsa Mosque compound during the Muslim fasting month of Ramadan. During these raids hundreds of Palestinians were wounded and arrested. Jews believe the compound is where the biblical Jewish temples once stood. But, according to an agreement in place since 1967, non-Muslims are allowed onto the site only during visiting hours, and are banned from praying there.

However, three Jewish people went to court to overturn this ban and on Sunday, a magistrate court ruled in favour of the three appellants who had been barred from the Old City by police for 15 days for praying at the site. Magistrate court Judge Zion Saharai said he had no intention of interfering in law enforcement at the site, and that the conduct of the three appellants “does not raise worry of harm befalling national security, public safety or individual security”.

“The special sensitivity of the Temple Mount cannot be overstated,” Judge Einat Avman-Moller said in her ruling on Wednesday, using the Hebrew name for the compound. The judge said Jewish worship there “should be superseded by other interests, among them the safeguarding of public order”.

One must wonder how this will all play out on Sunday in the city both Jews and Palestinians regard as their own. So many Palestinians being killed for no reason while Jews show contempt for not only their homes and land, but their laws. Whatever happens 16 yr old Ghaith Rafeeq Yamin will not get to finish his schooling, get a job, get married or do any of the other things 16 year olds in most societies can take for granted. We have to wonder at a society where being born Palestinian means that you must spend your life, no matter how short, struggling for basic human rights.