Alfred Linnell: the death of an ordinary man 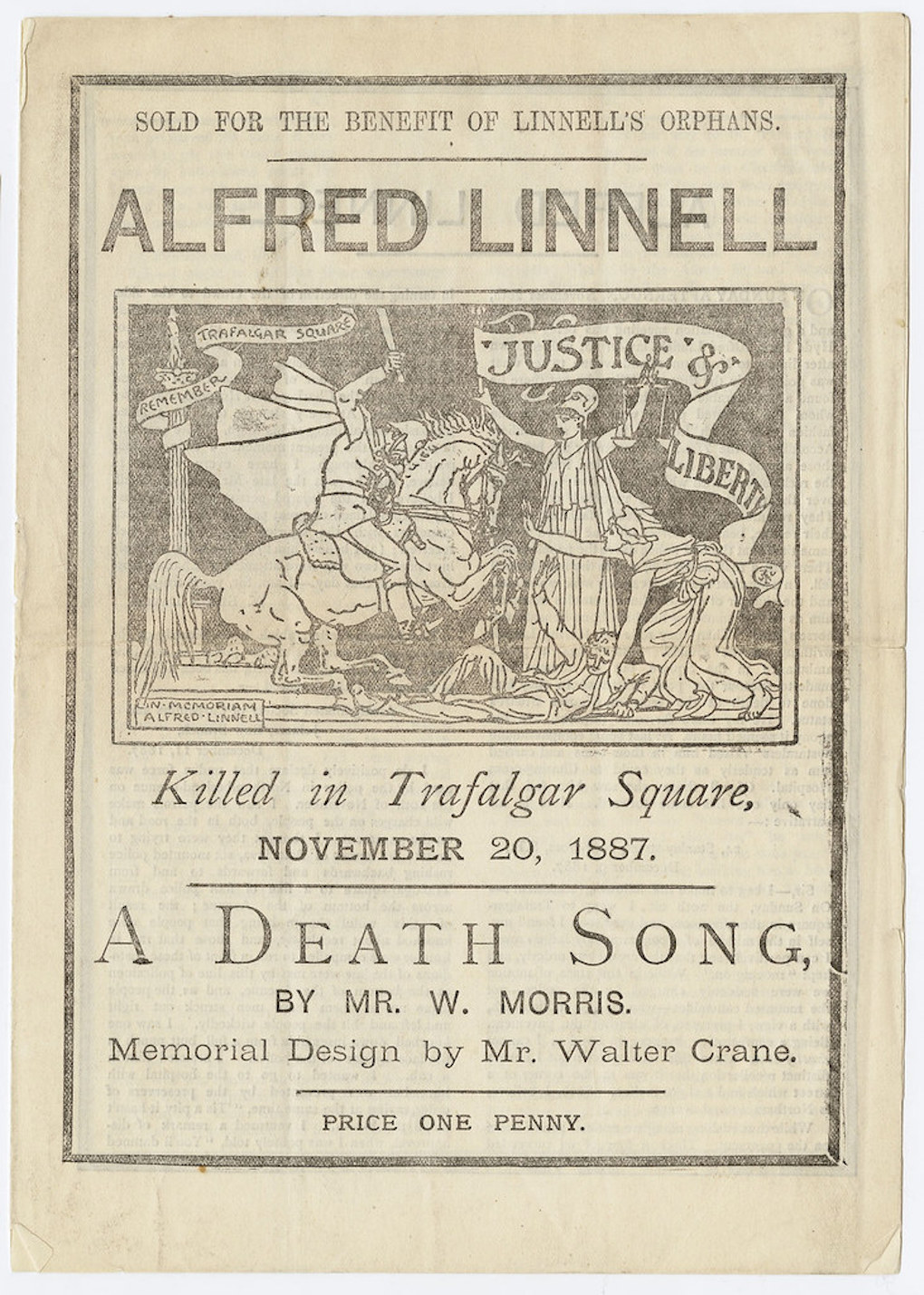 "'Alfred Linnel, Killed in Trafalgar Square, November 20, 1887: A Death Song'" by Digital Collections at the University of Maryland is licensed under CC BY-NC-ND 2.0.

IN London, in Tower Hamlets Cemetery Park, there is a small memorial, just a small plain white stone to mark the death of a man, Alfred Linnell, who was no hero, just an ordinary working man, but who is remembered because of the tragic circumstances of his death which occurred during a protest which followed what was later to become known as the first ‘Bloody Sunday’.

On Sunday 13th November 1887, more than ten thousand people marched towards Trafalgar Square, protesting for free speech and against repression in Ireland and nationwide unemployment. The Long Depression – a worldwide price and economic recession which began in 1873 – had meant falling food prices leading to rural unemployment, which meant workers were forced to move to towns and cities in their thousands, thus eroding employment, wages and working conditions. By November 1887, demonstrations by unemployed workers from the East End of London had been building up for more than two years, and there had already been clashes between police and the workers.

So, on November 13th, the workers marched, with bands playing and a general sense of goodwill at the beginning. Amongst them and leading them were such figures as Liberal MP and trade unionist John Elliott Burns, the famous poet, artist, designer, novelist and socialist activist William Morris, playwright George Bernard Shaw, Eleanor Marx, youngest daughter of Karl Marx, women’s rights activist Annie Besant, and other leaders of the period. Morris, who had been walking with Shaw, sensed trouble ahead when he saw their banner torn down and smashed.

About 2,000 police and 400 troops, including cavalry, had been deployed to halt the demonstration and they beat the protestors with truncheons and injured many more under the horses’ hooves. Approximately 400 protestors were arrested on the day, with 50 detained in custody, Burns being one of them.

Morris later said he was “astounded at the rapidity of the thing and the ease which military organisation got its victory”. He added “I shall never forget how quickly these unarmed crowds were dispersed into clouds of dust…” Morris stood his ground, but many of his comrades lost their nerve and ran. Shaw said, “Running hardly expresses our collective action. We skedaddled … I think it was the most abjectly disgraceful defeat ever suffered by a band of heroes outnumbering their foes a thousand to one”.

The Times’ reaction to the protest was predictable in that it laid the blame at the feet of the protestors: “It was … no serious conviction of any kind, and no honest purpose that animated these howling toughs. It was simple love of disorder”, the newspaper wrote. Those who were there, however, told a different story. Artist Walter Crane said, “I never saw anything more like real warfare in my life – only the attack was all on one side”.

Not much is known about Alfred Linnell, but, a week after ‘Bloody Sunday’, on November 20th, this man, who earned a living copying out legal documents and lived pretty much in poverty, decided to join a protest, which was again planned to gather in Trafalgar Square, only this time the protestors added the previous week’s violence by the authorities to their list of grievances.

Not a hero, but a brother

Alfred Linnell, just standing at the edge of the crowd, was charged into and knocked down by mounted police, his thigh smashed. He was left to lie on the ground until bystanders took him to Charing Cross Hospital. Twelve days later, on December 2nd, he was dead.

On December 18, Linnell was given a grand funeral. A huge procession of socialists, radicals, feminists, Irish Republicans and working people walked from the West End of London to the East, swelling to tens of thousands. Hardly anybody knew the man, but the streets were lined with crowds of sympathetic onlookers all the way to Bow Cemetery. Speeches were read by lamplight, and Morris gave an emotional eulogy, including the words, “let us feel he is our brother”, and his Death Song was sung. (See below)

Linnell may not have been a hero but he was representative of tens of thousands of the dispossessed, and those people came out on the day of his funeral to show their support for this very ordinary man.

What cometh here from west to east awending?

And who are these, the marchers stern and slow?

We bear the message that the rich are sending

Aback to those who bade them wake and know.

We asked them for a life of toilsome earning,

They bade us bide their leisure for our bread;

We craved to speak to tell our woeful learning:

We come back speechless, bearing back our dead.

They will not learn; they have no ears to hearken.

They turn their faces from the eyes of fate;

Their gay-lit halls shut out the skies that darken.

But, lo! this dead man knocking at the gate.

Here lies the sign that we shall break our prison;

Amidst the storm he won a prisoner’s rest;

But in the cloudy dawn the sun arisen

Brings us our day of work to win the best.

And a beautiful and modern rendering of the song.

One thought on “Alfred Linnell: the death of an ordinary man”